Seewer on his first MXGP podium 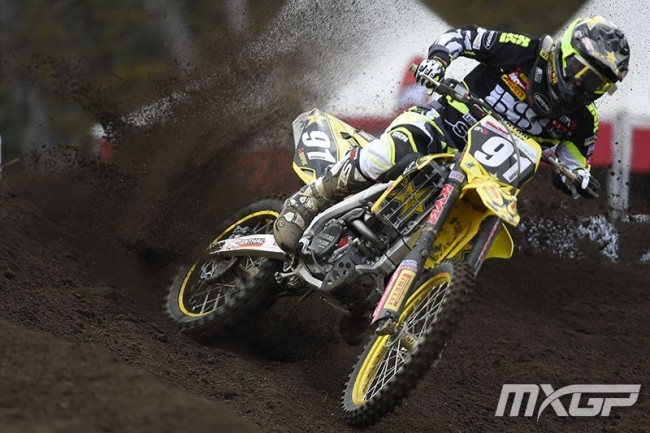 Having spent the majority of the season, thus far, recovering from a severely broken ankle, Monster Energy Yamaha Factory MXGP’s Romain Febvre’s MXGP return has been incredible. The Frenchman shook the effects of a stomach bug he suffered throughout the week leading in and was completely untouchable in the Qualifying Race as he put his YZ450FM at the front of the pack and led every lap for the win. The 27-year-old has only started four Qualifying Races this season and has been victorious in two of them.

In the opening race of the Russian Grand Prix, Febvre got off to a rip-roaring start on his YZ450FM and awarded Yamaha a fourth consecutive holeshot as he led the way around turn-one before being forced back to fourth amidst the craziness that always occurs on the opening lap inside the premier class.

Amongst the three riders that pushed past the Pole Man was Arnaud Tonus who further improved his impressive form from the previous Grand Prix rounds where he has mounted the podium twice. The Swiss rider was flawless in his pursuit from fifth to the front of the field where he was the only rider to challenge the new championship leader, Tim Gajser, in what was a thrilling chase all the way to the flag.

Tonus finished second-place, only 2-seconds shy of Gajser but 29-second clear of Febvre who backed off after catching his ankle on a rut and finished a comfortable third. Credit where credit is due, Jeremy Seewer charged hard for fifth position after starting outside of the top-10.

Like Seewer, Gautier Paulin wasted no time charging through the field after a mediocre start. The Frenchman, who was the fastest man on track yesterday, had caught the top-six in record speed before suffering from a horrific crash on lap-3. Fortunately, the 29-year-old was able to remount his YZ450F, but the bike was too damaged to continue.

In the second and final race of the Grand Prix, the Swiss duo of Tonus and Seewer were quick off the gate as they chased Glenn Coldenhoff and Gajser around turn-one. Behind them, Febvre hit a ski jump wide open and impressively launched his YZ450FM past three riders to move into seventh before falling one lap later and dropping back to 13th.

Tonus set the fastest lap of the race as he worked hard to make a pass on the new championship leader, Gajser. He showed Gajser a wheel on countless occasions and tried to force his way through but clipped a hay bale on the side of the track and crashed. Fortunately, he was able to make a quick remount and had enough of a gap over Seewer in third to finish second position.

Seewer was able to achieve yet another goal with a career best race finish, third, which meant he joined fellow Swiss rider Tonus on the podium. The achievement is one for the history books as it is the first time that two Swiss riders have mounted the FIM Motocross World Championship podium in the premier class.

Less than 2-seconds separated the riders from first position to 15th on the time sheet. This made passing extremely difficult and a good start absolutely crucial. Paulin had to fight hard for eighth place in Race 2, while Febvre’s mistakes cost him any chance of finishing on the podium. He finished ninth which was enough to round out the top-five in the overall classification.

Paulin was 14th in the Grand Prix classification and scored enough points to retain third place in the MXGP Championship Standings. The Frenchman has 11-points over Seewer, who has moved up to fourth.

Tonus is seventh in the Championship Standings. He needs 6-points to move into the top-five. Febvre is 14th.

The next round of the FIM MXGP World Championship will take place in five days’ time, on the weekend of June 16th, in Kegums, Latvia.

Arnaud Tonus
2nd MXGP Overall, 7th MXGP Championship Standings
“It wasn’t easy to fight for the lead. I was happy I had some good starts so at the beginning I was already close to Tim. There were not too many opportunities to pass on this track, so I came close, and I went for it, but I ended up making a small mistake. I am happy I tried and was able to recover and still finished second. I am still super thankful to be up here on the podium three times in a row.”

Jeremy Seewer
3rd MXGP Overall, 4th MXGP Championship Standings
“It’s amazing to make it onto the MXGP podium. It feels like it is much harder to get here, much harder that even some of my MX2 wins. It is a lot of work to get here, there are a lot of fast guys and especially on a track like we had today where there are a lot of guys riding a similar speed. I feel like it takes time to move from the 250cc to the 450cc and to get comfortable on the bike, but in the past few weeks I have been feeling good. My crew on the Yamaha Factory team have done an amazing job, and I owe a big thanks to them for making it happen. It feels like we are moving in a really good direction.”

Romain Febvre
5th MXGP Overall, 14th MXGP Championship Standings
“The weekend was good. Yesterday was really good to win the Qualifying Race. Last week I could not ride because I was really sick. I was lucky to feel better when I got here. In the first race I got the holeshot but I made some mistakes. I got back to third, but I hit my ankle and felt some pain, so I just secured third. In the second race I crashed and then stalled the bike and lost a lot of positions. I came back to nine, so the speed was good, but two mistakes on this type of track, I could not do better.”

Gautier Paulin
14th MXGP Overall, 3rd MXGP Championship Standings
“I had a good Saturday fighting up front. I really felt at my best. In warm-up this morning I was feeling good on the bike, but I didn’t have a good start in the first race, but I came through really quickly until I washed the rear end on one of the jumps and had a big ‘one’. It was a really big crash, I hurt my hands a little bit. I came back in the second race, and just rode my race. I didn’t feel good, but I will be back in Latvia, healthier than I am now.”