Seewer on his emotional home GP! 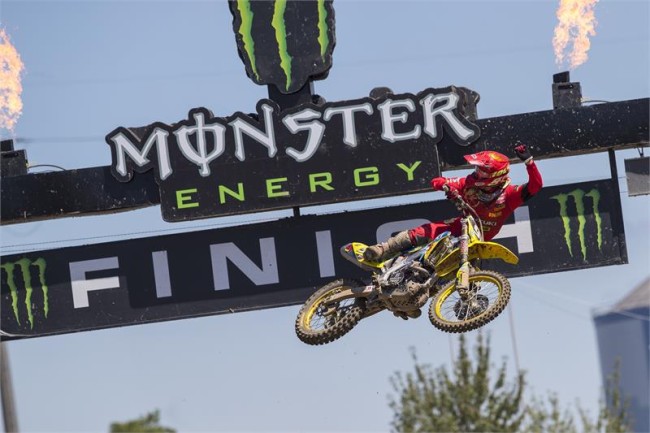 Jeremy Seewer gave it everything he had to bring the 30,000 Swiss supporters the overall victory they all desperately wanted. However, after winning the first MX2 moto of the MXGP of Switzerland, a crash in the first turn of race two robbed him of any chance of getting on the first step of the podium and instead he had to settle for runner-up spot again, just like 2016.

It was still a great performance by the #91 who overtook everyone except the top four on a track that was proving extremely difficult to pass on. Hunter Lawrence also showed his passing skills as he worked his way through the pack in both motos, finishing with a seventh in race two after being involved in the same incident as Seewer in the first turn.

“It was amazing how the whole weekend went,” said Seewer. “All the fans and all my friends are here, and I was just feeling so good both days, especially after the first moto victory on my RM-Z250. Then the second moto started and I was going for the holeshot and a KTM bike pulled across at the last second and I couldn’t avoid him after he cross-rutted right in front of me. There I was, dead last and the dream was gone. No more home overall. Luckily, I was fine after the crash and I put in all I had and I think it’s still an amazing job to have got fifth after that start. The track was tricky and difficult to pass on but I gave it everything. I’m still disappointed to get second overall though when I know I could have won it. I know it’s tough but I’m not going to give up and that feeling I had after the first moto will stay with me forever.”

Lawrence also didn’t get the results that his speed deserved after getting involved in some first turn antics himself. “I didn’t get the best start in the first moto as I was expecting a bit of tyre spin on the metal mesh and it didn’t happen. On Saturday, it happened so I was prepared for it, so I had less RPMs and my body weight was further back, but then it didn’t happen which obviously meant I got a bad start. Then in the first turn I stalled it anyway. I got my head down and charged through to 11th but the track was tricky and one of the ruts ripped my feet off the pegs and had a pretty hard crash. I couldn’t finish the moto as my head and back hurt a bit but in the break, I just tried to get myself ready as best I could for moto two. Then in the first turn of race two, some guys from the inside cut across and Jeremy crashed and I was right behind and nearly ran him over, but I stopped luckily. This meant I was last again so once more I put my head down and made it made it back up to seventh. Some definite positives in terms of my race pace and I’m hoping to take that kind of speed into Sweden next weekend.”

General Manager Stefan Everts remained positive about how events unfolded, despite the goal of a home win for Jeremy slipping through his fingers. “Jeremy had a fantastic weekend. In the first moto he had a tough battle with Benoit Paturel right up until the chequered flag, but it was a great race and great for all the Swiss fans who came to see him. In the second moto he got cut off by one of the KTM riders in the first turn and had to come from dead last but I think he rode the race of life in front of his home crowd; it just wasn’t quite enough to win the GP. Obviously it was a big disappointment not to be able to win his home GP, especially after how he rode in the first moto. But then to ride how he rode in that second race on this kind of track was incredible. Hunter had a nasty crash in moto one but he was riding ok before that happened. He’s still trying to get up to race pace after his injury, but then in race two he showed fantastic speed to come through the pack after getting caught up in the same incident as Jeremy.”

The EMX250 class also had their second moto today but unfortunately Zach Pichon’s day was cut short after a crash on the first lap: “I had a really bad start and was maybe around 15th on the first lap when I came to the wave section and unfortunately I got kicked left and right, ending up by going over the bars with a big crash. I hit my head and neck pretty hard and the bike was completely destroyed so I had to DNF the race.”

So while the overall feeling is one of missed opportunities, both riders know that the speed is there and that with a bit more luck they’ll be battling up the front of the field next weekend at the MXGP of Sweden in Uddevalla, where Pichon will make his MX2 debut.