Seewer, Lawrence and Pichon on their Swedish GP 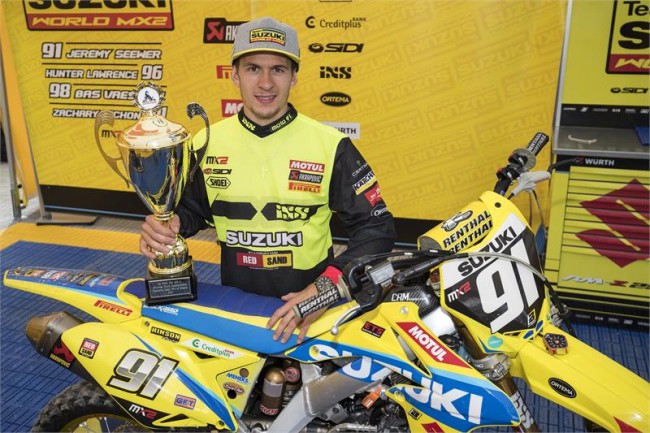 Jeremy Seewer battled hard in both motos as he took his fifth MX2 GP at the MXGP of Sweden. On a day where the weather conditions were constantly changing, the Uddevalla track provided a real test for all the riders, but Seewer coped the best and topped the scores with 44pts.

Behind him, Hunter Lawrence also showed everyone how to ride the track, running in second place in the second moto, just behind Seewer as the Suzuki RM-Z250s were in first and second position. In the end, the Australian came home in sixth place, but it was further confirmation of just how talented the young Australian is. Zach Pichon also proved he can run with the MX2 guys, putting in two solid motos, showing good speed and battling hard on what was his MX2 debut.

For Seewer though, it was an overall that he thoroughly deserved, despite the disappointment of not being able to take a moto win. He then gave his thoughts on the performance: “In the first moto I got a decent start and made my way to third position, where I then made a small mistake. That only cost me a few seconds, but it would prove crucial in the end as I came home in second, really close to Jorge Prado in first. And then in the second moto I got a really good start with the KTM duo up front. I made the passes happen and moved into the lead really quickly. I had my team mate Lawrence on my back in second place, in between me and Thomas Covington who was riding really well. I did my best all the race, I made a few mistakes near the end and of course I’m frustrated he passed me on that last corner but he was just on another level on those last couple of laps. It was frustrating on one side but I’m really happy to have got my fifth GP win this year, which is awesome for everyone in the Suzuki World MX2 team. I’m just enjoying racing so much at the moment and I’m having a lot of fun. The championship is important and it won’t be easy with just three to go, but we shall see how it goes.”

The end result wasn’t quite a good representation of how Lawrence rode, but ninth overall is still impressive for the MX2 rookie: “The first moto was difficult”, said Lawrence. “I got an ok start, around 15th but on the fifth corner another rider ran into the back of me and I crashed and had to start from last. I passed a lot of riders and got back to 12th but it wasn’t great to have to do that. In the second moto I got a very good start in the top five or six. I moved into second quickly but Covington was on my rear and putting pressure on me. I took a line a bit too rushed and came off just before the wall jump. It was the worst place to crash on the track and it took a bit to get going. I fought hard to come home in sixth, it just could have been better. A lot of positives though, riding is good, speed is good both motos, I just needed to put it all together.”

On his debut, nothing was really expected from Pichon, but it was still good to see three RM-Z250s out on the track and fighting hard. Afterwards the young Frenchman summed up his first ever MX2 event: “In the first moto I got an ok start, around 20th and was feeling good in the first 20 minutes. I was pushing hard and having some good battles. The last 10 minutes were difficult though, I made some mistakes and didn’t have a good rhythm on the track and lost some places. In the second moto I didn’t get off to the best start but I passed a lot of riders around the first corner and I think I was pretty close to the top 10. I was riding ok, but then I had a big crash on the table-top, nearly going over the bars. It was a good experience though, the results weren’t there, but overall it was ok for the first GP and I had fun.”

Stefan Everts was obviously happy to have another win for the team, and was especially delighted when the two RM-Z250s were up front in that second moto. “Jeremy had a good weekend, all weekend he was riding well and he felt really good. Sweden is a tough track, it’s a tough track and not one you can have a lot of fun on. He got everything dialled in really quickly and the riding was good. He had a good start and moved into second in that first moto. Unfortunately, he dropped it and ended up losing by a close distance to Prado. I think if he hadn’t dropped it he could have won the race. In the second moto the start was good, along with Hunter and after a couple of laps they was first and second and it was a dream scenario for everyone in the Suzuki World team. Unfortunately, Hunter made his mistake and then Jeremy got passed just before the finish line. We still took the overall win, so we have to be happy and glad for that, but it was a pity for that to happen right at the end. The gap at the top got four points smaller so we’re going to keep on trying and keep on pushing until the very end. For Hunter, he finally got a good start after analysing and studying everything and he was running up front. He was pushing Jeremy and one of the fastest guys out there. It was a very positive second moto and he proved he has the speed.”

With three rounds left, Seewer still has his sights set on over-turning the deficit at the top of the MX2 Championship and hopes to get another win for the Suzuki World team when the series resumes in the USA on September 2nd.