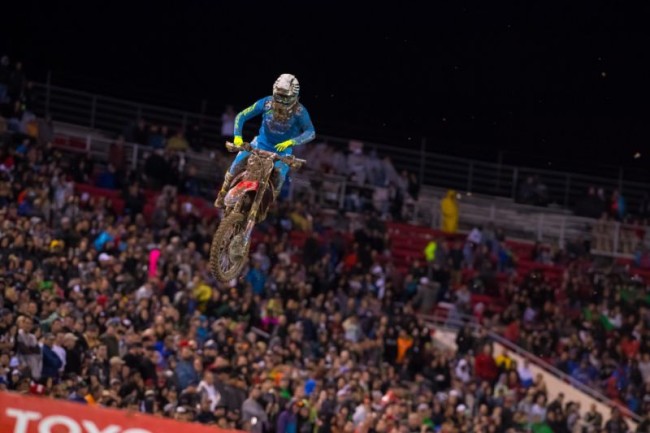 The muddy conditions that followed a day and night of rain at the Las Vegas AMA Supercross season finale did not favor Team Honda HRC riders Trey Canard and Cole Seely, who each had multiple mishaps throughout the shortened 16-lap main event before taking the checkered flag in eighth and ninth places, respectively.

When the gate dropped, Canard got off to an eighth-place start but relinquished multiple positions during the opening laps. The Oklahoman put his head down and began working his way forward on the sludge-covered track, eventually climbing to fifth. Unfortunately, a crash in the whoops caused him to fall back to eighth, which is where he would finish. Sitting 15th after the completion of the first lap, Seely struggled in the slick conditions but eventually advanced to ninth.

NOTES
•On Friday, Team Honda HRC’s Cole Seely and Trey Canard were joined by GEICO Honda’s Justin Bogle, Malcolm Stewart, Jimmy Decotis, RJ Hampshire and Jordan Smith for an autograph session at RideNow Powersports.
•Team Honda HRC was pleased to host HRC Vice President Mr. Shuhei Nakamoto for the final round of the AMA Supercross series.
•With hail, lightning and torrential downpours following the day’s first timed qualifying practice, the track conditions quickly deteriorated, forcing the promoters to cancel the second session. Riders were slotted into the night program based off their initial times. Canard notched the second-quickest time at 1:02.644, while Seely was 13th with 1:04.627.
•In 450SX heat 1, Canard launched to a top-five start and was working on securing a transfer position when he went down in the mud-covered whoops. He remounted to finish the race but was forced to transfer into the main through the semi. Meanwhile, fellow Red Rider Justin Bogle put his CRF450R out front early, leading the entire six laps and securing his first heat-race win. In heat 2, Seely got a mid-pack start and was forced into the pits after the opening lap due to a goggle malfunction. He too would transfer to the main via the semi.
•For the seventh time this season, Team Honda HRC hosted a special family through Ride for Kids and the Pediatric Brain Tumor Foundation. The family’s daughter Irelynn was diagnosed with a brain tumor in late 2015 and although she has yet to participate in a ride event, her family has already putting together their team to raise money. The family received tickets and a rig tour and got to meet Canard before joining the team for dinner.
•As has been the case at select rounds this season, Team Honda HRC’s technical and hospitality trucks were only a portion of a huge Honda footprint in the Las Vegas pits, as multiple activations and activities were incorporated for the fans. Under a third truck, fans got the opportunity to sit on and check out models from the CRF family, and there was a lineup of vintage race machines under another tent. All of this was joined by the popular learn-to-ride program for kids.
•Team Honda HRC and everyone at American Honda congratulates Malcolm Stewart and the entire GEICO Honda team on his 2016 250SX East Region Championship.
•Team Honda HRC manager Dan Betley was involved in an accident at the end of the 250SX main event and had to be treated by the Asterisk medical crew. Betley had descended the managers’ tower in order to congratulate Stewart when he was hit by the bike of a crashing rider. It was a frightening-looking incident, but in the end, Betley was okay apart from six stitches in his arm, a big bump on the head and some bad scrapes.
•With the AMA Supercross season completed, Team Honda HRC will enjoy a much-needed weekend off before kicking off the AMA Pro Motocross championship on Saturday, May 21, in Sacramento.

THE FOCUS: Countdown to Hangtown

Although Team Honda HRC had hoped for more from the 2016 AMA Supercross series, riders Trey Canard and Cole Seely, along with the entire crew, are eager to turn the page and start a new season fresh. “I’m really excited for the outdoors,” Canard said. “After a rough supercross season, there’s freshness in an opportunity to start over. I’m looking forward to Hangtown and to see how things unfold throughout the series. Since our original outdoor test before Easter, we’ve been riding more motocross in preparation. I’m really happy with where I’m at right now and think the bike is working great. We’ll fine-tune some things in the next two weeks and hopefully head into the opening round strong.”

Canard’s mechanic Brent Presnell added, “I’m feeling really good leading into motocross. I think it’s tough when you get into the last few rounds of supercross and you’re not in the title hunt because you’re already setting your focus on outdoors.”

It was unbelievable to see the amount of rain that was coming down here in Las Vegas today. I think the whole Dirt Wurx crew did an awesome job getting the track fixed up enough to allow us to ride. The track was dangerous though, so I’m just happy to come out safe. That’s the bright side but I’m still disappointed, and I’m happy supercross is over. It’s been a tough season so I kind of just want to turn the page and move forward.

I’m definitely not happy with tonight’s result. That’s not how I wanted to finish the season. The track conditions were horrible and it was really just about survival throughout the race. I never got totally comfortable; I fell once and was just fighting the track. Honestly, after seeing what happened to Dan while sitting on the starting line, I wasn’t into it. I’m really happy he’s okay considering how bad it looked. I’m definitely setting my sights on outdoors now.