Seely and Canard talks about Texas 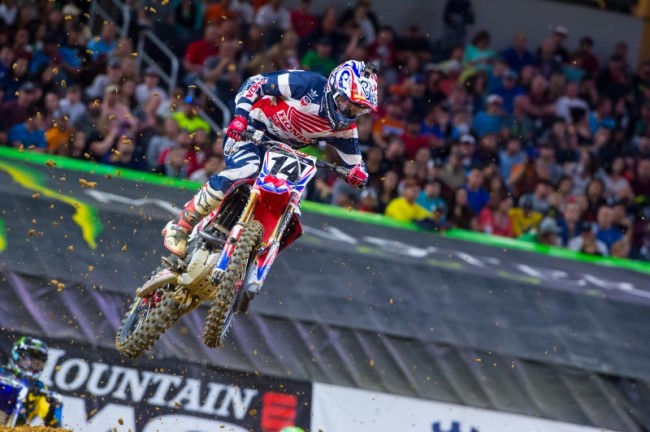 The AMA Supercross series headed to AT&T Stadium in Arlington, Texas, for round seven, and it was a night of mixed emotions for Team Honda HRC. Cole Seely finished just shy of the podium and teammate Trey Canard was ninth.

After the main-event gate-drop, Seely rounded the first turn in fourth aboard his CRF450R and made quick work of the rider in front of him. He maintained third position for the majority of the race, but with track conditions getting increasingly difficult with each passing lap, the Californian began to fall off the pace, allowing Jason Anderson to close in. On lap 14, Seely relinquished one position, ultimately taking the checkered flag in fourth. Canard had a challenging night, completing lap one in 15th place and working his way up to 10th before going down in a turn. He put together another impressive charge, advancing from 17th to ninth by the end of the 20-lap race.

It was another short week for Team Honda HRC, as the squad participated in its second press day of the season. On Thursday, Cole Seely interviewed with local CBS channel 11 News before joining Trey Canard and GEICO Honda’s Justin Bogle to teach Dallas Cowboys Senior Sales Consultant Dana Jones how to ride a CRF150F.
On race day, Team Honda HRC was honored to have retired Navy SEAL Morgan Luttrell—twin brother to Marcus Luttrell, coauthor of New York Times bestseller Lone Survivor—stop by for a special visit. Morgan Luttrell is a big supercross fan and was happy to get a behind-the-scenes look at the team’s activities before meeting Canard and receiving an autographed jersey.
The team also hosted a special family whose son Liam has participated in Ride for Kids events in the Dallas area during his fight with brain cancer. The family received tickets and a rig tour and got to meet Canard and Seely before joining the team for dinner.
During the daytime qualifying practice, Canard turned the fourth-quickest lap with a 50.618-second time, while teammate Seely was seventh at 51.181.
Slotted in 450SX heat 1, Canard got a top-10 start and quickly began working his way toward the front. While the Oklahoman was running fifth on the final lap, a rider in front of him went down, allowing Canard to take over the final transfer spot. Seely and Bogle weren’t as lucky in heat 2 as bad starts forced them into the semis, where they ultimately secured transfer positions.
This weekend, the Honda Red Riders head to Atlanta for round 8. On Friday, the riders will make an appearance at Douglasville’s Freewheeling Honda from 6 to 7:30 p.m.

For the second time this season, the Red Riders were given a special opportunity to visit pediatric brain tumor patients thanks to the Pediatric Brain Tumor Foundation and Ride for Kids, for which Honda is the presenting sponsor. The visit took place on Friday at the Dallas Children’s Medical Center, where Trey Canard, Cole Seely and GEICO Honda’s Justin Bogle spent time in several playrooms, hanging out with young patients before making bedside visits to children who weren’t well enough to join earlier. The riders autographed posters for each of the children and handed out Honda gift bags, each of which included a T-shirt, beanie and stickers. Fox Sports 1 footage from the visit was used in a small feature that aired during the broadcast and will be included in an episode of “Chasing the Dream” to air later this season.

“I’m really happy we get the chance to come do these visits when we’re in town,” Canard said. “It’s so often that we take advantage of the small things in life and don’t realize how blessed we are, so to be able to come and put a smile on children’s faces when they’re going through so much, really puts everything back into perspective. They don’t know who we are or what we do, but they love having visitors, which is what matters.”

“Today was a lot of fun,” Seely added. “We played games with some kids, colored and crafted with others and even played air hockey and video games. It’s really cool to be able to make an impact on someone’s day, even if it’s just for a moment.”

Cole Seely 14
“I’m not bummed but I’m also not stoked. It’s still fourth, which really isn’t bad, and for how the day went I’m glad I was able to turn it around for the main and come away with a decent finish. In both the heat and semi races, I didn’t get the greatest starts, so I kind of got to practice passing. It was okay but it’s never fun having to go through the semi because then you get a worse gate pick for the main. I was third or fourth outside the box, which made me a little nervous, but I just really dug deep for that start. I came out fourth, passed for third and ran there for a good chunk of the race before my shoulder that I had surgery on last year got tight and Anderson closed in on me and make the pass.”

Cole Seely
Trey Canard 41
“There were some good steps in the right direction, but obviously I’m disappointed. I just have to get better on the starts and I won’t be in trouble like I have been. We’ll keep working and come back next week.”

Dan Betley
Team Manager
“I’m a bit frustrated with tonight but it could’ve been worse. Cole struggled with the start in his heat race and had to go to the semi, which I think is the first time he’s had to do that this season. He came back and got a good start in the main and was running a solid race until about lap 13 when his shoulder tightened up and he fell off the pace and finished fourth. It was a tough night for Trey. We struggled with the start in the main. He was fairly far outside but still managed to get a good jump out of the gate, but unfortunately he lost it after that, which put him in a bad position for the race. He was about 14th at the start and was trying to make his way forward when he went down and fell back again. We’ve made some positive changes with the bikes the past two weeks and the riders are happy so we just need to keep building.”

Rich Simmons
Mechanic (Cole Seely)
“I’m not quite sure why, but it was a rough day in general. Cole didn’t ride well all day in practice and just was kind of off. He did get another good start in the main event, which was positive, and he rode well for the first three-quarters of the race. We have to work on something for those last five laps or so. We need to find that missing piece.”

Brent Presnell
Mechanic (Trey Canard)
“Despite the main-event result, I think today went pretty well. Trey’s qualifying times were back up there with him only being three-tenths off of Ryan Dungey, which is an improvement. His starts didn’t show the progress, but he actually was coming off the line better than normal and being competitive, which is something that he hasn’t been able to do lately. I think he was just too far outside in his gate in the main event, but he was riding really well. When you start in the back, it’s normally hard to find the pace of the frontrunners, so when you’re able to do that it’s pretty good. If he hadn’t gone down I think he probably would’ve made it up to sixth or seventh.”