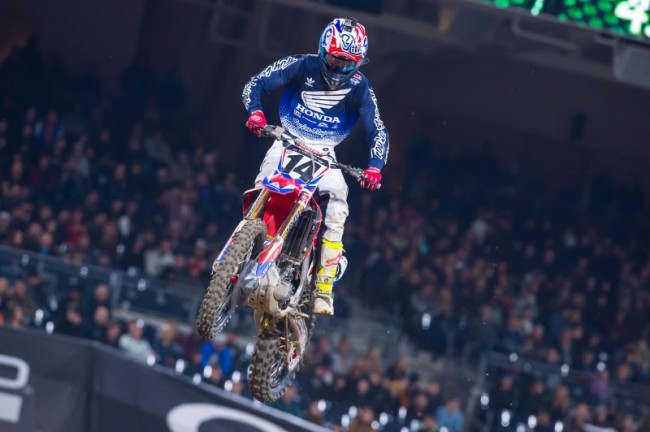 Although Team Honda HRC had hoped for more at the first of two 2016 stops at San Diego’s Petco Park, the squad was pleased with Cole Seely bringing home another third-place finish and is optimistic moving forward. The Californian completed lap one in seventh place and quickly began navigating his CRF450R toward the front of the pack, moving into third on lap six. Near the end of the 20-lap main event, a heated battle ensued with Jason Anderson, and Seely relinquished one position, taking the checkered flag in fourth. However, after further review by the AMA, it was determined that Anderson had jumped during a red-cross flag; he was subsequently docked two positions, officially moving Seely back into third.

Following a less-than-desirable start that left Trey Canard 15th on the opening lap, he was able to put together a solid come-from-behind performance to salvage a seventh-place finish.

Prior to Saturday’s action, Team Honda HRC’s Trey Canard and Cole Seely joined GEICO Honda’s Justin Bogle, Christian Craig, Jimmy Decotis and Jordan Smith for an appearance at Motoworld of El Cajon to hang out with fans and sign autographs.
Honda has a successful history in San Diego, with a total of 14 victories—more than any other manufacturer. Honda also has the most San Diego podium sweeps in both classes, at six: 1987, 1990, 1991, 1993, 1996 and 2011.
During the day’s timed qualifying practice sessions, Seely was eighth with a 49.190 lap, while Canard was tenth at 49.634.
Seely and Canard were slotted in 450SX heat one along with fellow Red Rider Bogle, and the two Team Honda HRC racers were sitting 5-6 after the completion of the first lap. Seely began charging forward, ultimately landing in third and transferring directly into the main event. Although Canard was forced to qualify through the semi, he laid down the second-fastest lap time during the heat race.
With 40 points, Seely now sits third in the championship, just one point from second. Canard is seventh with 28.
This weekend, the Honda Red Riders head back to Anaheim for Angel Stadium’s last stop of the year. On Friday, the riders will take part in a dealer appearance at Huntington Beach Honda from 6-7:30 p.m.

So pressure-filled and scrutinized is the season opener—for both riders and team staff—that last week’s race can almost be considered a separate entity from the rest of the AMA Supercross series. That being the case, the second round can be viewed as the first of the “normal” races. Granted, it’s still too early to say that Team HRC is completely settled into a groove, but compared to Anaheim 1, nerves were calmer in San Diego, and the routine a bit more familiar.

“Of course the first race is exciting, but it’s always a relief to get it behind us and head to the second race,” said Team Manager Dan Betley. “The bulk of the staff is unchanged from last year, so it hasn’t taken long for everyone to get back into a flow. Even though we had a busy and productive off-season with testing, there’s something about being in a race situation that highlights areas where small improvements can be made, with both the bikes and the riders.”

“It’s really only my seventh week back on a Supercross track, so I feel like in a sense that’s affecting me a little bit,” Cole Seely said. “I’m confident though, and I think I’ll continue to progress each week. I haven’t peaked and I’m going to continue to gain momentum.”

Cole Seely 14
“I got off the gate to an okay start but was shuffled around and came around in seventh. The first two laps were so hectic with everyone jumping different lines, it was hard to make anything happen, so after things settled a few laps in, I knew I could put my head down and make some passes. I moved into third and was feeling really good, then I got into another heated battle with [Jason] Anderson. I knew he was back there but then all of a sudden he was right on me because he jumped on a red cross. He hit me pretty good in the corner, a little harder than I was expecting, but that’s racing and what happens when you’re lining up against such a stacked and talented field. I hate to be handed a position, but it is what it is.”

Cole Seely
Trey Canard 41
“I’m really frustrated with how things went today. Definitely not what I wanted, but I’m happy with the bike and think the team is in a great place. I’m glad to be leaving healthy and to have salvaged another seventh since I got such a bad start. I just need to continue to work on things heading into next weekend.”

Trey Canard
Dan Betley
Team Manager
“I’m happy we were able to come away with another podium finish, regardless of how it happened. It’s definitely not ideal, but the AMA reviewed the video and there was clearly a red-cross flag out that wasn’t abided by. Cole rode well; I’m pleased with his performance and look forward to seeing what he continues to bring to the table throughout the season. Trey struggled today, but I’m confident we’ll work it out and he’ll be on the podium and winning races before we know it. He shows the speed, has the talent, and is a great rider, so we all feel he deserves to be better than his seventh-place finish.”

Dan Betley
Rich Simmons
Mechanic (Cole Seely)
“Tonight was interesting—not necessarily the way you want to get third, but we’ll take the points and keep working. I think overall there was big improvement compared to last weekend. Cole didn’t get as good a start, but his lap times were more consistent throughout the 20 laps and he was closing up on [Chad] Reed a little before he and [Jason] Anderson started battling.”

Rich Simmons
Brent Presnell
Mechanic (Trey Canard)
“It was a rough day all in all, but honestly I was happier with Trey’s ride for this seventh-place finish than last week’s seventh-place finish. He wasn’t 100% today, so I think if you can still finish in the top 10 with this depth of field, that’s pretty good. He rode well but got a horrible start, so that just put him in the wrong position right from the beginning. It’s still early in the season though, so we just need to keep making progress each week.”