Seely and Canard talk about A2 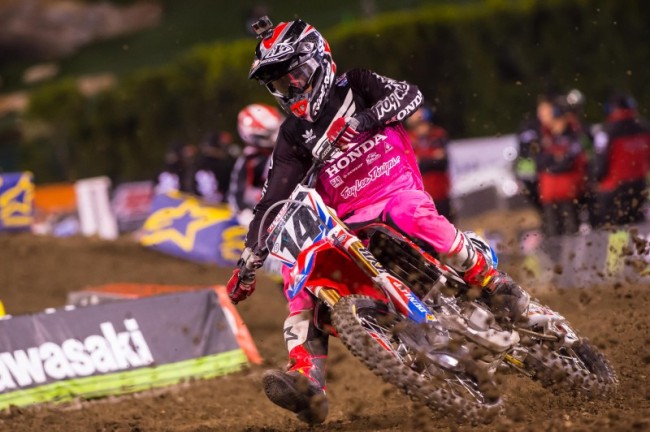 Round three of the AMA Supercross series, which marked the second and final stop at Anaheim’s Angel Stadium, proved to be a challenge for Team Honda HRC. After two consecutive podium appearances, 450SX Class sophomore Cole Seely had hoped to continue his streak, but a less-than-desirable start in the main event left him fighting through the pack. Sitting 11th after the completion of the first lap, Seely put his head down and began maneuvering through the field, eventually taking the checkers in sixth. Teammate Trey Canard showed notable speed during the day’s timed qualifying sessions, but hard crashes in the heat race and main event left him sidelined for the remainder of the night. Luckily, his injuries only required stitches, and he is expected to return to action at the Oakland round in one week.

NOTES
•On Friday evening, Team Honda HRC’s Trey Canard and Cole Seely joined GEICO Honda’s Christian Craig, Jimmy Decotis and Jordan Smith to spend time hanging out with fans and signing autographs at powerhouse dealer Huntington Beach Honda.
•During timed qualifying practice, Canard led the charge for Team Honda HRC by logging a 56.845, the fourth-fastest time, while Seely was sixth-quickest at 57.172.
•Both riders were slotted into 450SX heat 1, and although Canard enjoyed a decent start, he went down hard in the first rhythm section and was brought back to the pits by the Asterisk medical staff. Seely charged to a third-place finish, transferring him directly to the main event.
•In his heat-race crash, Canard had suffered cuts to his right hand, but after the Asterisk medical team bandaged him up and mechanic Brent Presnell repaired the damage to the bike and also installed a pair of hand guards on his CRF450R race machine for extra protection, the rider was able to return to the gate for the second semi-qualifying race of the night. Although he got off to a cautious start, he was able to find his groove and transfer to the main event with a second-place finish.
•While working through traffic in the main event, Canard and another rider made contact a few laps in, sending the Oklahoman off the track on the face of the finish-line jump. After extricating himself from the trackside Tuff Blocks, Canard elected to call it a night.
•It was an exciting night for GEICO Honda’s Christian Craig, as he made his first 250SX podium appearance of the season with a hard-fought third place. Craig led nearly half the main event before getting involved in a heated battle with current points leader Cooper Webb, and he eventually relinquished two positions. Teammate Jimmy Decotis also had a solid performance, scoring the holeshot and finishing just shy of the podium, in fourth.
•On January 30, Team Honda HRC will campaign the fourth round of the AMA Supercross championship, which takes place at O.co Coliseum in Oakland, California.

As had been the case at Anaheim 1, the typical Team Honda HRC technical truck and hospitality truck only represented a portion of a huge Honda area fielding a number of activations and activities for the fans. In front of a third truck was a display with a number of models from the CRF family for fans to check out and sit on, as well as a Trey Canard replica CRF450R on which people could have their photos taken by a brand ambassador for sharing on social media. Out of a fourth truck, staff from the Colton, California, Rider Education Center operated a learn-to-ride program through which kids age 6-12 had the opportunity to try out a CRF50F or CRF110F on a small dirt track. Topping it all off was a display of vintage CR500 race bikes once campaigned by Marty Smith, Danny “Magoo” Chandler and David Bailey, along with two phone-charging stations powered by Honda generators. For the entire time that the pits were open, the area was busy with fans enjoying the opportunity to engage with Honda product.

“In addition to the two Anaheim rounds, we had this same setup for last week’s Monster Jam,” explained Suzan Fairchild, American Honda Motorcycle Interactive and Experiential Marketing Manager. “It was a big hit there as well. The kids love the opportunity to try out the bikes, and then they get to have their picture taken in front of a big trophy and a Cole Seely mini-replica CRF. These are our people, so we just figured, ‘Let’s give them some love’ so they can connect with us.

“After tonight’s main-event result, I’m not too stoked. I had to do some major damage control after a bad start, a hectic first three or four laps and a little mishap, but I was able to come from outside the top 10 to sixth. I guess I can’t complain about that too much, but I really wanted to get more points for the championship. Other than the result, I feel like I was riding really well. Once I got through some guys and started clicking off laps, I felt good and had a good pace going. After I got into sixth, it was just too late and there was too much of a gap to catch up.”
Cole Seely

“I’m extremely mad and disappointed in how tonight went, but it could’ve been much worse. Other than some stiches in my hand, I’m leaving healthy for the most part, which is a blessing considering the two crashes.”
Trey Canard

“Everything that could’ve gone wrong tonight went wrong, so I’m just ready to get out of here and head to Oakland. Despite Cole getting a bad start, I think he rode really well and was able to come back to salvage valuable points. The team is really bummed for Trey, but luckily his injury isn’t long-term and he’ll be back next week. He had multiple spots on his hand stitched up at the end of the night, and the stiches will stay in for five days. He’s able to ride this week if he can stand the pain, so we’re going to take it day by day.”
Dan Bentley

“We got sixth—not what we wanted at all, but for a bad night it’s actually pretty good. I thought Cole had a pretty good start but he must have gotten shuffled around during the first few turns because he was pretty far back. He was riding well though and his lap times were good. He was matching the leaders’ pace about halfway through, when he started to pick it up and find his rhythm. It’s a long season and we just need to keep moving forward.”
Rich Simmons

“Man, tonight was brutal. If we can take anything positive away from this, it’s that there are no serious injuries that will keep Trey off the bike for an extended period of time. After the heat-race crash, he was really gutting it out during the semi and main because his hand was hurting. When he went down in the main, I think he was just in pain and frustrated, and it wasn’t worth risking further damage. He continues to show his speed in practice, so we need to make that translate into the night.”
Brent Presnell