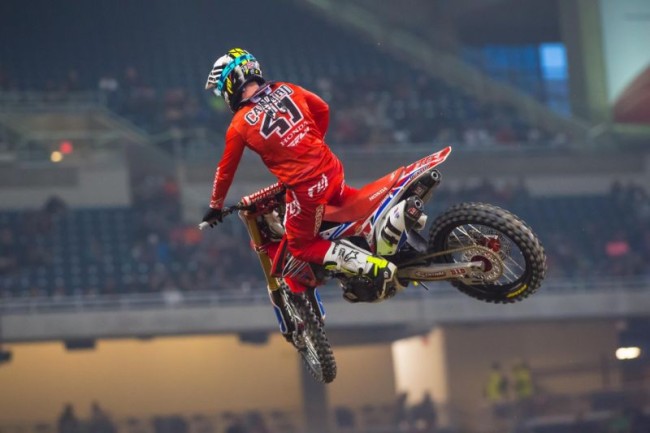 Round 11 of the AMA Supercross series in Detroit is a race that Team Honda HRC would like to put behind them, as multiple misfortunes left riders Trey Canard and Cole Seely fighting for position. After posting solid times in qualifying and scoring his third heat-race win of the season, Canard was dogged with another poor start in the main, leaving him 14th at the end of the opening lap. The Oklahoman was putting together a solid ride, as he advanced through the pack to a fight for seventh, when another rider pushed him wide on lap 12. Canard ran into a Tuff Block and off the track, then rejoined the race in 12th and spent the final laps recovering as many positions as possible, ultimately taking the checkered flag in eighth.

Teammate Seely had propelled his CRF450R off the line to a good start and quickly moved into fourth, but disaster quickly struck when Seely missed his rear brake with his right foot while exiting the whoop section, and he was launched over a berm and off the track. He remounted in last place, but an impressive come-from-behind performance saw him cross the line in 11th.

NOTES
•Prior to Saturday’s action, Team Honda HRC’s Trey Canard and Cole Seely joined GEICO Honda’s Justin Bogle, RJ Hampshire and Malcolm Stewart for an appearance at Genthe Honda Powersports in Southgate, Michigan, to hang out with fans and sign autographs.
•For the fourth time this season, Team Honda HRC was pleased to host Honda Racing Corporation Representative Director Keisuke Inomoto.
•During the daytime qualifying sessions, Canard notched the fourth-quickest lap time at 46.786 seconds, followed by Bogle in seventh with a 46.989-second lap. Seely was ninth at 47.409.
•The evening started out on a positive note, with all three Honda riders transferring directly to the main event through their heat races. Canard was slotted in heat 1, and when the gate dropped he was able to sneak inside to a second-place start. He made quick work of the rider in front of him, taking the lead and riding to the win. In heat 2, Bogle and Seely took advantage of decent starts and other riders’ mistakes to take the checkers in third and fourth, respectively.
•On race day, Team Honda HRC hosted a special family whose son Andrew—a young brain-tumor survivor—has participated in multiple Ride for Kids events in the Detroit area. The family received tickets to the Detroit Supercross, a tour of the team’s technical and hospitality semis and a unique opportunity to walk the racetrack, and they got to meet Canard. “Andrew had a rare form of cancer where most children don’t survive the first year and even fewer the second year,” said Michelle, his mother. “He’s 10 now. He survived because research is constantly evolving and organizations like Ride for Kids and the Pediatric Brain Tumor Foundation are dedicated to making sure that happens. It’s wonderful that someone like Trey and a company like Honda are helping raise awareness. We’re so grateful we got the opportunity to experience supercross and appreciate everything Honda has done.”
•It was an impressive night for the GEICO Honda 250 effort, as Malcolm Stewart rode flawlessly despite feeling under the weather, scoring his first victory of the season and taking over the points lead in the 250SX East championship. He will don the red number plate when the class returns to action in Indianapolis on April 9.
•Through Detroit, the AMA Supercross series has raced 11 consecutive weekends, but now the racers and teams will get Easter weekend off. The pause is welcome for many, including Canard’s mechanic Brent Presnell. “I’m really looking forward to spending time with my family on the off weekend,” he said. “We have an Easter egg hunt on Saturday, as well as a T-ball game. Since I’m technically a coach, it’s going to be nice to actually get to go to a game—for the first time, other than just practice. We’re probably going to head to Disneyland too. I’ve got to make up for the fact that I’m gone 29 weekends out of the year.”
•The Honda Red Riders will return to action on April 2 for round 12 at Levi’s Stadium in Santa Clara, California.

THE FOCUS: Preparing for the Outdoors

Before taking a well-deserved weekend off, Team Honda HRC has some work to attend to. Following this event, Trey Canard, Cole Seely and Justin Bogle were scheduled to spend Monday and Tuesday at Canard’s private track in Edmond, Oklahoma, to begin preparing for the AMA Pro Motocross series.

“This will be our first outdoor test of the season, which is typical for this time of year,” explained team manager Dan Betley. “Trey has a couple different tracks that we’re going to do some testing on. Our focus for the week is chassis and suspension. We want to get a good base for the riders and get them comfortable. We’ll be starting with what we raced on last year and then building off of that. After this week, we’ll get back to supercross, but from here on out we’ll start to have some regular outdoor tests to get ready for the season.”

Plagued with injury during his rookie 450 outdoor season last year, Seely is looking forward to putting in the work for the 2016 series. “I only raced a handful of motocross races last year, so I’m excited to get out there and test with the KYB guys especially,” he explained. “I didn’t get much time with them last year because I was transitioning over to their equipment when I got hurt, so I didn’t get much testing in. I’m excited to get out there and put some days in to figure out some outdoor settings. I feel like I’ve never really had a great outdoor setup that I feel confident in because I don’t think I’ve ever focused enough on the testing, so I’m excited to get back to it.”

I’m extremely frustrated and mad with how tonight ended. I felt good all day long and was really happy with my bike. We made some adjustments to help keep the feeling consistent throughout the whole 20 laps, and I was really able to feel the traction where I was looking for it. I got a good start in the heat race, but couldn’t translate that over to the main, again. I had worked my way forward and was trying to pass [Blake] Baggett for seventh when he pushed me right into the Tuff Blocks and off the track. I feel like I was clearly going faster, but I let him have the inside line and instead of just taking it, he carried over right into me. I’m really looking forward to this weekend off to regroup before Santa Clara.

I got off to a good start in the main event and was running fourth when I just made a small error going through the whoops, making me miss my rear brake going into the turn after. I ended up going through the Tuff Blocks and over the berm so I had to pick it up from there. I was too far back to really do too much with it, but I was able to get up to 11th. Obviously, I’m pretty bummed on that but I felt really good on the bike and we made some positive changes throughout the day. We have a good platform to start with at Santa Clara.

Tonight was tough. All three riders were riding well in the heat races and even in the main, but the results did not follow. We will use this weekend off to further improve the areas where we are lacking to have better results for the rest of the series. I would like to congratulate Malcolm Stewart on his first win of the season.
Keisuke Inomoto

You know, the day was going pretty well. Our qualifying times were good, Trey won his heat race and everyone transferred to the main from the heats, which was awesome, but during the main event it all fell apart. Cole was about fourth, but ended up going down in the corner after the whoops. Trey had his own problems, getting another bad start and having some run-ins with another rider. We need to figure this out and become more consistent with our starts because this can’t keep happening.

Today went about the same as how the last few weeks have gone. The day was good, Trey qualified well, won his heat and then just another bad start in the main. He was at least riding awesome, had the leaders’ pace and was running a good lap time the entire 20 laps, so he was actually moving through the pack with some authority. Unfortunately, he got run off the track by Baggett later in the race and had to pick it up and re-pass some guys that he had already passed.

The day and night were pretty bad. I had to replace a lot of parts after Cole’s crash in practice, but luckily he was okay and we were able to get back out there. He had a good heat race and was happy with the suspension-setting changes we made, so that was positive, but then he went down in the main and was dead-last. I think he rode really well once he got up, which is a bummer because he had a good start. It’s definitely a would-have, could-have, should-have moment.