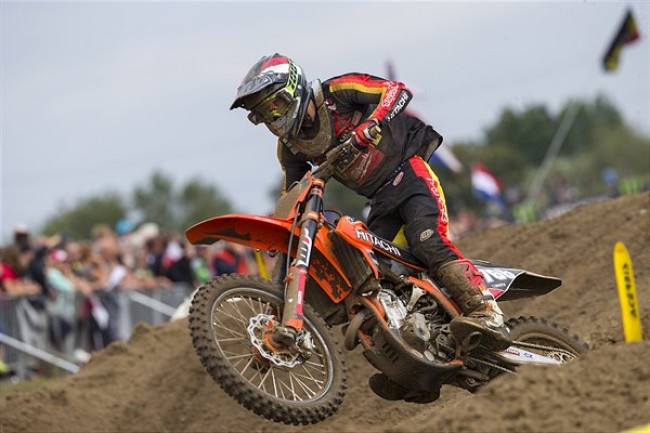 The Hitachi KTM Fuelled By Milwaukee team headed to Lommel in Belgium for Round 14 of the 2019 FIM Motocross World Championship.

The home track for many of the MXGP and MX2 riders and welcoming thousands of motocross fans to the famous sand circuit. With Conrad Mewse, Alexander Brown and Bas Vaessen suffering from injury, Austrian Michael Sandner kicked off his MX2 campaign on the Hitachi KTM 250 SX-F. Saturday’s qualifying set the scene for Sandner placing him 15th around the 1,880 metre track. Heading out of the gate for Race One, Sandner dropped to seventeenth before pushing back at picking his pace up to cross the line where he started in the points. Race Two, Sandner dropped positions in the opening lap falling to 23rd but fought hard and battled back up the grid to regain 16th overall. The team now head into the penultimate round of the British Maxxis Motocross Championship at Foxhill Motocross Track, Swindon before venturing to Italy for the 15th round of the MXGP Championship taking place in Imola, Italy on 18 August.

Michael Sandner:“I got off to a good start and had a good flow in my first race and managed to finish in the points in 15th. Between race one and race two the team did a great job with set up in such a short time space.The second moto I found a good rhythm but unfortunately a mistake lost me a few places and it wasn’t easy to fight my way back up. However, I gave it my best and managed to get back into the top 20 and finished the hardest race of my life in 16th. I’m very happy to be a part of this amazing and professional team that push me at the highest level.”

Team Manager, Roger Magee:
“Due to the injuries that we have suffered in recent weeks to Conrad Mewse, Alexander Brown and Bas Vaessen, we welcomed Michael Sandner into the Team. We only managed a couple of days intense testing for bike setup last week in preparation for the arduous GP in Lommel. Michael has already integrated himself in with all Team members and his results in the qualifying race and the two motos on Sunday were very gratifying and somewhat unexpected given the lack of time he’s had on the bike. We will continue this week with WP technicians to make our race bike more suitable to Michael’s riding style as wee look forward to next weekend’s penultimate round of the British Maxxis Motocross Championship at Foxhill where Michael will show his true potential.”