Sanayei on leading the Russian GP – it was a really great feeling! 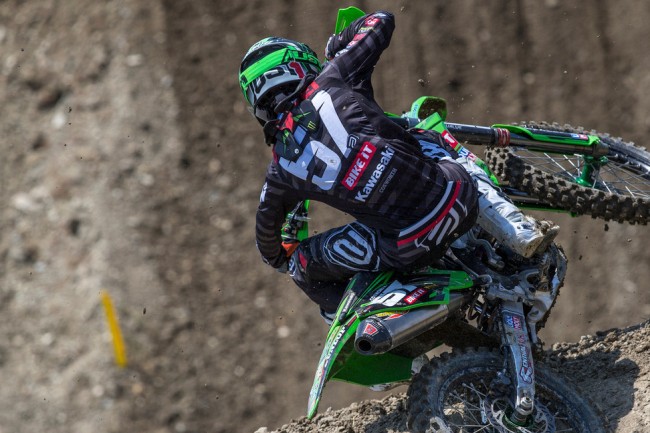 Bike It DRT Kawasaki made it all the way to the MXGP of Orlyonok in Russia for round 8 of the MXGP season. Still battling the Eppstein Barr virus, Sanayei managed to put in a spectacular performance in Russia that has shown a glimmer of hope for the potential taste of success. A superb start and 15 minutes of leading the MX2 Race 1 saw the Cosworth powered KX250 where it belongs, at the front of the pack. Although unable to continue this pace in the 30-degree heat for any longer, “57” was able to bring home a season-best 6th position. Although Darian used nearly all of his energy in the warm conditions of race one, he was able to get another good jump and hold onto 3rd for 15 minutes. Unfortunately, the lack of endurance came through as he dropped back to 18th.

Meanwhile, Gustavo showed improvement fighting in the top 15 in qualifying, but a stone damaged his goggle laminates which hampered a score better than 20th. Some mistakes on race day cost Pessoa a chance of bringing home some points, but the Team will now regroup and head onto Latvia for the MXGP of Kegums this weekend.

Darian Sanayei –“It was a really great feeling to get the holeshot in Russia, and then lead the first race this weekend in Russia. The conditions were hot too. I managed to lead for about 15 minutes and eventually finished in 6th. I had used pretty much all my energy in that race so it was difficult to know if I could even do race 2… But we decided to go out and at least try. I got a good start and held onto 3rd for around 15 minutes. Eventually I finished in 18th, but considering my circumstances of not training or riding during the week and feeling dizzy before getting on the bike.. we have to look at the positives. This weekend was definitely a step in the right direction and it was nice for the team to get a taste of what’s possible. Upwards from here!”

Gustavo Pessoa – ” I felt really good with myself and the motorbike this weekend in Russia. Saturday, I was among the top 15 in qualifying but I had problems when a stone hit my goggles and ended up finishing 20th. On Sunday I just made lots of mistakes that meant I didn’t get good results. We will continue fighting to improve!”

Steve Dixon, Team Manager- “All season Darian has been getting good starts, except a few races with gate issues – It was good to finally see him lead a race. A hard winter of work and testing with our partners was vital for allowing something like this to happen. It’s no fluke that Darian was at the front leading the pack. It’s just a shame we haven’t been able to be fighting at the front week in week out. We need to thank Kawasaki and all our partners for sticking with us even though the World Championship title isn’t within reach. The sand this weekend in Latvia will be tough, so we’ll have to see how they both get on.”