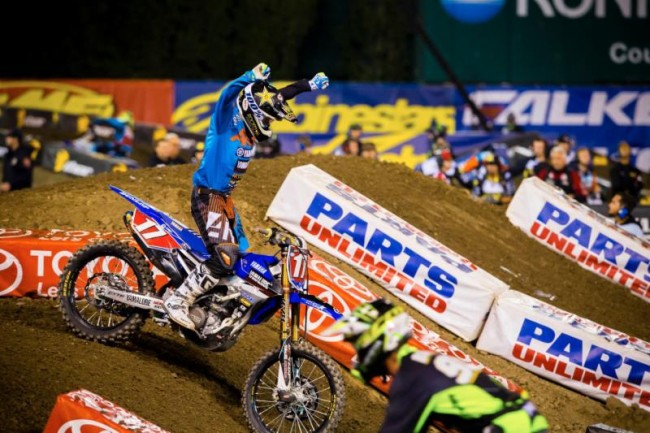 “It feels so great to get this win,” stated Dungey. “The whole team and myself have been working really hard to get everything dialed in and I think our progress shows based on my results over the past few weeks. I am very thankful to them for their hard work to help get me up here each weekend.”

Roczen bounced back after his big crash in Oakland to finish fourth in Anaheim.

“I started-out in practice not feeling the greatest, for some reason,” said Roczen. “I just felt a little bit off. In the Heat Race I didn’t grab that good-of-a start but I could kind of snuck around and then I rode a good race. Same thing happened in the ‘Main’; I had a horrible start. I don’t know what I was doing. Then (Blake) Baggett held me off for three-or-four laps and that’s when the guys in front gapped us. We caught them at one point but then I got passed by (Eli) Tomac on the last lap, which I’m not happy about. Basically, the starts are what really hurt me. It is what it is. We’re looking forward to this weekend. We finished fourth, which isn’t awesome but it’s ok.”

Tomac finished third in Anaheim, marking his third podium of the season.

“The difference between trying to win the championship with the 450s compared to the 250s is that we have a longer season with the bigger bikes,” said Tomac, a two-time champion when he competed on his Honda CRF250. “The 250 season in Supercross is only eight races long, so if you have a bad race, it’s super hard to make up for it. In 450, you still don’t want to have a bad race if you can avoid it, but with 17 races you do have time to overcome it. And almost everyone is going to have an off weekend at some point. It’s racing.”

Canard finished fifth after scoring his first win since 2011 at the Oakland stop.

“Fifth place isn’t bad, but it’s always disappointing when you’re in a good position and don’t capitalize on it. I was good in qualifying and was pumped to finally get a good start; hopefully we can continue doing that and put ourselves in a better position for the rest of the series. I got into a rhythm around halfway and felt a little bit of urgency to pass Cole. Maybe I rode a little too aggressively and went a bit too wide in the sand and washed the front. I buried the clutch lever and had to dig that out, and I never really got going after that. My riding is good, so there’s no big drama; I just need to keep doing work and make progress..”

“The past three weekends, I feel like I’ve gotten my aggression back and worked out the bugs from those first rounds, but I needed the start. I got a horrible start in my heat race, but the main was better. The elevated start made things interesting, and I got off the line good and really charged down that thing. I came out of the first turn third and then passed [Blake] Baggett for second. I tried to look forward the whole time, which was really hard because these guys were putting the pressure on most of the race. I managed to hold them off though, and I’m pumped with second and am looking forward to San Diego.”

Anderson has been inside the top 10 at every race, including an eighth in Anaheim

“My weekend went alright. I got a decent start in the main and I felt like I kind of just rode around and ended up 8th. Not my best day but I’m going to go back to the drawing board this week, work on some things and just focus on moving forward to San Diego and a better result.”

“We are continuing to work on starts,” said Barcia. “The Top 10 riders are all fast, and it’s hard to make up time if you don’t start up front. The team and I are going to keep working and getting better. I’m looking forward to good starts and running up front in San Diego.”

Reed finished sixth, just one week after his first podium of the year in Oakland.

“Tonight was the toughest Anaheim of the three,” said Reed. “The track was super technical all day and by the time the night show started the track became pretty one-lined. If you’re not up-front from the start it’s hard to come through the pack on a track like this.”

Millsaps won his Semi Final race but a crash in the Main Event set him back.

“The Main Event was a bummer,” said Millsaps. “I felt really good today and had solid, competitive times. In the main, I got hung up with another rider and was way behind. This was not a good track to have to move through the pack because it was very one-lined by the main event. We salvaged what we could and will look onward to San Diego.”

Baggett turned in a career-best seventh place in Anaheim.

“The start was definitely tricky tonight,” Baggett admitted. “The gate dropped down right away, so I had to hit my first shift really quick and drive through the bottom at the start and then go late on the brakes into the first turn.”

Can Webb back up his Anaheim win and start a two-race streak?

“Getting my third win this season at Anaheim 3 was unbelievable,” said Webb. ” I was able to get a nice solid start behind Jessy and just kind of waited behind him for a few laps, made my move and just put my head down and just try to do my own thing. It was an awesome night for the whole Star Racing Yamaha team. I was able to get my third win of the season and my good buddy, teammate, Aaron Plessinger was able to get his first ever podium, and it was just a great night overall. I am really looking forward to San Diego it will be the last race before the big break. I still have the red plate so we are just looking to hold on to that thing, and kind of go into the break with a bang, try to get another win at San Diego and just keep it going.”

“Anaheim was awesome for me,” said Plessinger. “I went out in practice and qualified sixth and then I got fourth in the second heat, and then I went into the Main Event and did what I needed to do. I got by Osborne really quick and I ended up finishing third, getting my first podium, so I am really stoked on that I couldn’t be happier with that. I am heading into San Diego with high hopes and high confidence. I am hoping to put it back on the box, so I guess we will see this weekend.”

Nelson has a win and two additional podium finishes but a 10th place in Oakland set him back.

“I had a great heat race,” said Nelson. “The restart helped me since my start wasn’t as good in the first gate drop. Once I was in the lead, it was good, but I made some mistakes and Cooper got around me. Overall I still felt good about my ride. We’ll see what we can do next week in San Diego.”

“I was definitely thankful that we got to have a full restart,” said McElrath. “I should be getting better starts, and thankfully I was able to put a decent one together on the restart. I felt good and I know I’ll just keep working at getting on that podium before the season is over.”

“Today was ok. I struggled a bit in the first two sessions and then found some flow in the last one,” said Osborne. “In the heat race I had a little tip over after a really good start. In the main, my gate didn’t fall at all, it didn’t even move. When I was riding around for f laps seeing no red flag I was frustrated. I felt like it was blatantly obvious that it didn’t fall and I was riding around in 18th place. I thought how did these guys not see this? After a few laps I gave up hope on a restart and started to try and regroup, then finally the red flag came out. In the second start I had a good jump and I felt it was a second chance to do well. I rode around in third for a while and ended up fourth. I just lacked a little bit there at the end as far as the race pace goes because I haven’t been riding during the week.”

“This has been a tough week,” said Bowers. “I’ve been sick all week and today was no better. I had a podium finish lined up in the first start and was working my way there in the second, but threw it away. It’s unfortunate, but just as it happened to me this week, the same can happen to anyone else next week. We’re still in this.”

“I’m bummed about the restart because I had a decent start in the first gate drop,” stated Hill. “But it is just part of racing, and unfortunately, I suffered that crash in the beginning. I’m glad I was able to salvage the positions I did and get into the top 10.”

Stewart picked up the first win of his career in Oakland

“This race is really wide open for all of us; kind of a big unknown because no one has ever raced Petco Park before,” Stewart said on heading to Petco Park. “I think that makes it really exciting, not just for the riders but the fans as well. We could have a bunch of crazy things happening this weekend. Obviously, we’re going from a wide-open football stadium to a tighter ballpark layout, so it could be more technical rather than high-speed. No matter what, I’ll be ready. The Dirt Wurx guys always build great tracks for us and I expect nothing less this weekend.”

On the heels of the birth of his baby daughter this week, Hansen turned in a seventh place finish.

“It’s been a great week,” said Hansen. “My baby girl was born this week which took priority. Today went pretty well and I know with a start I can be on the podium. I’m having fun every weekend and feel like I’m building momentum each week.”