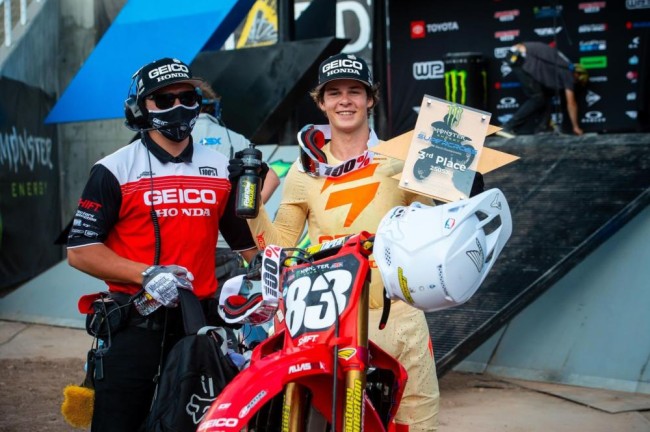 It was only Jett Lawrence’s fifth AMA Supercross race at the weekend but he managed to secure his first podium in the 250SX class. It wasn’t really a surprise because if anything the podium should have come sooner but it was nice for the Aussie to make it happen.

The Aussie has bags of talent and has been tipped for a number of years to have a big future in the sport and at the age of 16 he’s already got a Supercross podium to his name, he’ll be looking to stand on the top step soon.

Ryan Hughes has very high praise for Lawrence and believes he can win the title next year.

“I have watched many kids come up and some have something a little more special than the rest – Ryno Power athlete, Jett Lawrence is that kid! His technique – his youth – his big balls to pin it and his obsession for the sport will see him a champion next year! Mark my words”, Hughes stated.

Anyone that watched Jett racing the EMX250 class won’t be too surprised to see him succeed in America, at 14 he was winning EMX250 championship races. Heading into 2021, Lawrence might have more pressure to deal with that ever so it’ll be interesting how he handles it.