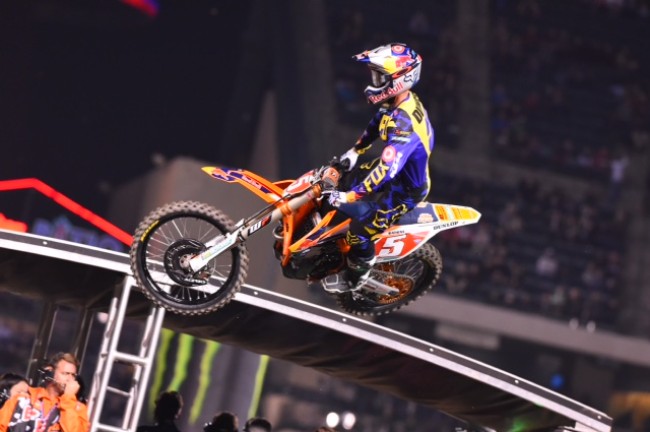 For the first time in his 450SX Class career, Team Yoshimura Suzuki rookie Blake Baggett earned the SupercrossLive.com Holeshot Award with Dungey in second place. Dungey used a pass on the opening lap to get around Baggett and take over the lead, and on the same lap, Team Honda’s Cole Seely passed Baggett to take over the number-two position.

Dungey led 19 of the 20 laps in the Main Event to earn his 15th career victory and his first since Indianapolis last March, 12 races ago.

“The whole day was great,” said Dungey. “We went out there and got a good start, got into the lead and led all of the laps. That is all we can do. We’ve finished fourth, third, second, second and now first [this season], and that is a step forward. We will continue to take it race by race and give it everything we have.”

On the last lap, Tomac made a pass on Roczen to secure the third and final spot on the podium. Seely held on for a career-best second place finish.

“Those guys were pressuring me toward the end of the race, but I was able to put my head down and hold them off,” said Seely.

Dungey extended his lead over Roczen in the championship to 11 points, while Tomac moved into a tie with Canard for third.

Monster Energy/Pro Circuit/Kawasaki’s Tyler Bowers, the four-time AMSOIL Arenacross Champion, moved into fifth place by the end of Lap 1, but on the following lap he crashed, reentering in last place after stopping for adjustments in the mechanics area.

Webb passed Nelson for the lead on Lap 7 and rode to his third win of the season. Webb’s teammate and 250SX Class rookie Aaron Plessinger, who completed AMSOIL Arenacross’ Ricky Carmichael Road to Supercross last year, earned the first podium of his career with a third place effort.

“I couldn’t have asked for a better race,” said Webb. “I look forward to keeping the momentum up next weekend in San Diego.”

“I can’t believe I am up here [on the podium] tonight,” said Plessinger. “I am speechless. This is an accomplishment that I didn’t expect in my rookie season.”

Nelson moved into second place in season standings, up one position from last week, and sits 18 points behind Webb. Osborne, who finished fourth, moved into third, while Bowers dropped to fourth following his 15th-place finish. Bowers entered the night in second.