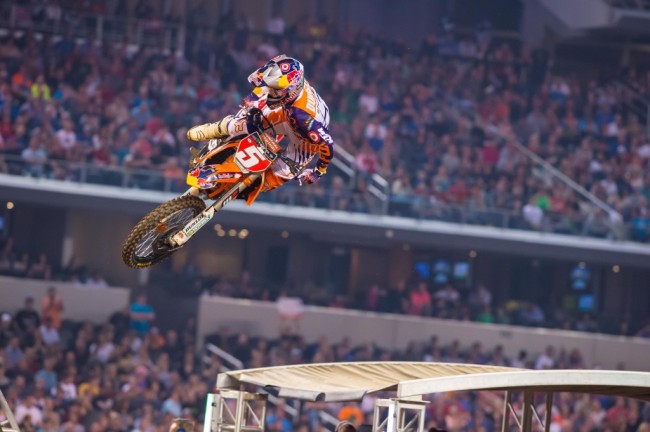 Ryan Dungey might just be the most underestimated multi-time American champion ever.

Ryan has won two 450 supercross titles and created history both times. He was the only rider other than Jeremy McGrath to win the title in his debut season and then this year he gave KTM their first ever big bike supercross title! It was also the longest anyone had went between supercross titles.

He has forty outdoor wins and is third on the all-time win list and has won three US national outdoor championships, with possibly a fourth coming up this year. He has also won the Des Nations three times as well.

But despite all this brilliant success, Dungey just doesn’t have the same aura in US racing as Johnson, Bradshaw, McGrath, Emig, Stewart, Carmichael, Villopoto or even an Eli Tomac.

Dungey is a quiet champion, he doesn’t seek the limelight, he isn’t there to be famous. He’s a nice guy who works as hard as anyone and who has relentless motivation. In many ways Dungey is the perfect role model for a kid looking to be a champion.

But he seems to get overlooked time after time.  Why? Because being smart isn’t as glamorous as being the fastest man on the track and crashing out in style. People want the ‘wow ‘ factor, especially in America where the win at all costs mentality doesn’t quite fit with Dungey’s smart calculated riding style.

A quote from Isle of Man TT legend Mike Hailwood is relevent here: “You should always win the race at the slowest possible speed.”

Now don’t get me wrong, Ryan Dungey isn’t slow but that is kind how Dungey does it, he takes the least risks he can to get the job done. It’s the smartest and the best way to do it.  More kids watching the pros should want to be like Dungey, but unfortunately the Stewart, RV and Tomac style of riding with blistering speed and aggression but high risk is what US riders are growing up wanting to be.

But Dungey is doing it the right way. He has hardly ever been injured, which makes him excellent value for a team and means he won’t hurt as much when he is older! Dungey doesn’t ride with the stereotypical US riding style he almost has a GP riding style of being smooth and taking the wins when they come but never ride over the limit.

And while everyone is crashing around him Dungey just goes at the pace he knows he can do. He will try and push harder if he can, but if the risk is greater than the reward (a championship) Dungey will accept a second or third.

Unfortunately that doesn’t have the same appeal to the fans when they are used to a balls-out Ryan Villopoto charging flat out down the track, or Eli Tomac blitzing everyone on his “on” days. Even Justin Barcia seem to get more buzz than Dungey for his aggressive, spectactular wild style.

The only problem that Dungey has is also his strength. He lack of aggression and smart riding are what have won him those titles. But if, like Ryan Villopoto was able to do, you can ride the edge and get away with it then that is how you beat Dungey.

However Dungey is forcing his competitors to take that chance and many times it also works out in his favour. Let’s not forget Dungey is very fast in his own right. It is only a supremely talented Roczen or arguably the second greatest rider of all time in the USA, Ryan Villopoto, that have beaten Dungey to a title in recent seasons.

To beat Dungey you have to do something special and even then there is no guarantee you will still win as Eli Tomac found out this season, indoors and out, and Ken Roczen found out in supercross. Even if you are faster than Dungey, you can’t make a mistake or you will let him back in the game.

When all is said and done Ryan Dungey will go down as one of the best riders in US history, and even though he doesn’t get the acclaim he should probably get right now, Dungey will be able to hold his head up high with his name in the record books and know he did everything right and he did it his way,