Rubini and Sanayei shine in France! 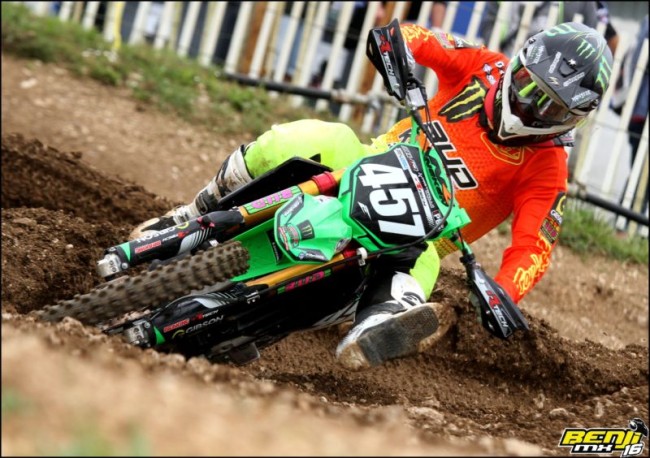 Saint Jean d’Angely is a world-class, yet typically French style motocross track, which is clay-based and stony with loads of spectacular downhill ski jumps, and a lot of elevation.

Today the fourth round of the European Championship EMX125 presented by FMF Racing and the sixth round of the European Championship EMX250 joined the paddock of the FIM Motocross World Championship for the MXGP of France where in the premier amateur class, EMX250, Bud Racing Monster Energy Kawasaki’s Darian Sanayei won both races for his first EMX overall victory, while KTM Silver Action’s Stephen Rubini did the same, and had the home fans fired up as he topped the box for the second time this year.

As the last race of the day yesterday, the EMX250 had to deal with a brutal and edgy hard pack circuit, which suited Bud Racing Monster Energy Kawasaki’s Darian Sanayei down to the ground. The American found a way around the rookie, KTM Factory Junior’s Jorge Prado, and pulled away for his first win of the season. Prado then came under attack from the championship leader, Bodo Schmidt Motorsports’ Thomas Kjer Olsen, who passed him relatively easily. Olsen didn’t have anything for Sanayei in that particular race though, just as Prado didn’t have anything for Tip Top MP32 Racing’s Mathys Boisrame, who moved into third but ended up being forced out with a mechanical problem. Prado then was gifted third behind Sanayei and Kjer Olsen at the checkers.

Move over Josè Butron, there’s a new Spanish holeshot king in town and it’s the young KTM Factory Juniors sensation Jorge Prado. Prado took his second holeshot of the weekend narrowly over the race one winner Bud Racing Monster Energy Kawasaki’s Darian Sanayei, Karlis Sabulis and Team Suzuki World MX2’s Bas Vaessen. Sanayei wasn’t taking any nonsense from the small framed rookie and leant on him heading into the next turn, and all the way down the hill to force the pass for the lead before turn three.

At the end of the first lap the championship leader, Bodo Schmidt Motorsport’s Thomas Kjer Olsen, was already inside the top five with Tip Top MP32’s Mathys Boisrame in tow. Meanwhile the Latvian, Sabulis had dropped back to sixth.

After passing Prado in the first few turns, Sanayei looked like he wanted to put in an early sprint except Prado wouldn’t let him go and stayed on him for the first ten minutes before the losing the front end on a slick patch. With the rookie down, Kjer Olsen capitalized and set the fastest lap of the race on the following lap, while Vaessen, Boisrame and the defending champion J-Tech Honda’s Nick Kouwenberg among others all inherited a spot.

Kjer Olsen pushed hard for a few laps but couldn’t match the pace of the American talent, Sanayei, who had the race in the palm of his hands. Vaessen and Boisrame battled hard for third which eventually went to Vaessen while KTM’s Kevin Wouts came from miles back to round out the top five.

At the end of a solid weekend, Bud Racing Monster Energy Kawasaki’s Darian Sanayei was in a league of his own and managed to take his first race win of the season yesterday, and paired it with another today for his first double moto victory and first ever EMX250 overall victory. Bodo Schmidt Motorsport’s Thomas Kjer Olsen was also a cool, calm and collective picture of consistency with his 2 – 2 performance for second overall while Team Suzuki World MX2’s Bas Vaessen did enough to land on the third step of the podium.

Much to the delight of the French fans, KTM Silver Action’s Frenchman Stephen Rubini ran away for an easy win in the opening race of the weekend yesterday. The red plate holder Sahkar KTM’s Jago Geertskept the Frenchman honest for most of the race before making a slight mistake with three laps to go. DP19 Yamaha’s Roan van de Moosdijk almost took advantage of the Belgian’s mistake but made a mistake himself with a few turns to go and had to settle for third.

In race one today, Italian Andrea Zanotti got the break he’s been looking for when he pulled a super sweet holeshot ahead of yesterday’s race one winner KTM Silver Action’s Stephen Rubini and Rubini’s fellow French countryman Pierre Goupillon, who had his good start undone when he crashed on lap one.

Team MJC Yamaha’s Zachary Pichon was the first to inherit a spot off of Goupillon and set the fastest lap time on lap three. While Pichon was looking good as the initial pace setter, he bobbled massively on lap four and allowed IceOne Racing Husqvarna’s Mikkel Haarup to close in. Another slip up a few turns later and Haarup capitalized to take second place.

The Fin riding for IceOne Husqvarna Racing, started closing up on Rubini who was in the middle of challenging Zanotti for the lead. As an instant response to the challenge from Haarup, Rubini dropped the hammer and nailed a berm to whip right around the outside of Zanotti for first. Haarup was also in a hurry to do the same but was a little to hasty and made a mistake which saw him almost go over the ‘bars and only loose one spot.

At the halfway mark, Goupillon was back on form and passed Haarup, Van de Moosdijk and Zanotti like they were standing still, to take third. Meanwhile, DP19 Yamaha Racing’s Roan Van de Moosdijk found some good lines and managed to make a move on Haarup before going after Zanotti. In a moment of impulse, Van de Moosdijk hit a roller tapped and launched past Zanotti but landed in some ruts and crashed.

Rubini had the crowd fevered with his second win of the weekend, which landed him on the top step of the podium for the second time this season. Meanwhile fellow Frenchmen, Pichon and Goupillon, made it a French whitewash in race two as Zanotti put in his best race finish with fourth ahead of Haarup.

The red plate holder, Sahkar KTM’s Jago Geerts, who was second in race one yesterday got off to a shocking start, well outside of the top 20, and only managed to get back to seventh. It was still enough for him to land on the podium behind the winner, KTM Silver Action’s Stephen Rubini and Frenchman Pierre Goupillon.