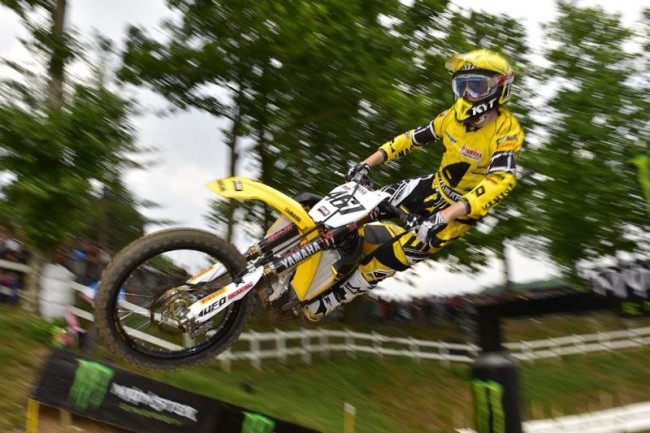 MXGP star and winner of the last two rounds of the FIM Motocross World Championship, Romain Febvre, has signed to stay with the Yamaha Factory Racing Yamalube team for the 2016 and 2017 campaigns.

The 23 year old has been in outstanding form in his rookie term in the premier class and in his first season with the YZ450FM. The Frenchman gained his maiden podium finish in Spain for the sixth round of the nine held so far and then claimed victory in France and last weekend’s rain-hit Italian fixture. His explosive and impressive speed has pulled ‘461’ up to third place in the MXGP standings.

Febvre graduated from the MX2 class in 2014 having taken third position in the championship and celebrating his first Grand Prix victory at Trindade in Brazil. The previous season he walked a Grand Prix podium for the first time and only three years before that was European Champion. His rise has been quick and emphatic and Romain has been a fine ambassador for the Italian works crew and the Yamaha brand since coming into the set-up during the winter.

“I liked how everybody was very close and got on well; it was like I was coming into a family,” Romain said. “The team cannot do enough for the riders and they always want to improve. Even when I came off the track and did the TV interview last weekend we were already talking about parts where we can get better again. Of course I’m happy to stay with Yamaha. They believed in me last year to sign a young rider from MX2 and for sure we have to be pleased with how everything has gone so far. I learn quickly and I can adapt well and I think this has helped.”

“Romain came into our factory team very easily and effectively and his ability and work has really been showing in the last Grands Prix,” commented Yamaha Motor Europe MX Manager Erik Eggens. “He has been an excellent addition to the Yamaha structure and our racing family and it is fantastic that we will be together for more time.”