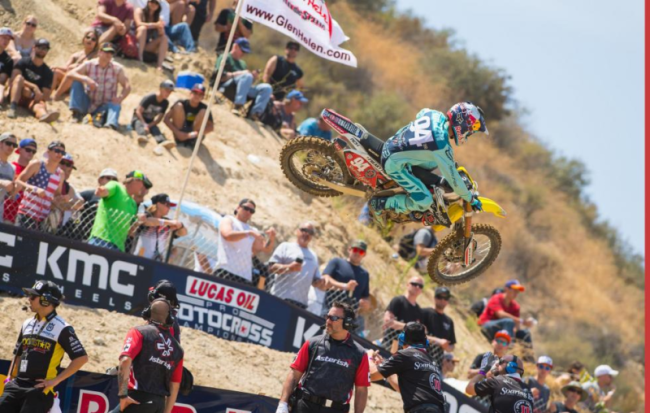 For the second week in a row and the fourth time in five races, RCH Suzuki Factory Racing’s Ken Roczen turned in a perfect 1-1 performance to win both motos aboard his Suzuki RM-Z450 at the ultra-fast Muddy Creek Raceway course in Tennessee at the weekend.

At the same time, the 22-year-old German rider notched his fourth overall win of the 2016 Lucas Oil Pro Motocross Championship and 11th of his career. Roczen continues to lead the field in the title chase where he holds a commanding 47-point advantage over his next closest competitor, Eli Tomac.

“I feel like I rode good and obviously Eli (Tomac) crushed it today,” explained Roczen, who was able to outlast his closest rival by just under two seconds in the day’s second moto. “For me it doesn’t matter if I win by 20 seconds or a half-second. A win is a win for me. Even though he’s been fighting hard, I was able to keep him behind me. That’s really all I care about and all that matters. We’re safe so I would say it was another awesome weekend for me, obviously going 1-1. I’m just as happy as I was at previous races where I had a bigger gap (of victory). It doesn’t really matter to me.”

While Roczen won by nearly six seconds over Tomac in the first moto, the Kawasaki rider was determined not to let the 2014 series’ champion score an easy win in the second.

“With him (Tomac) being behind me, obviously I knew he was going to be strong,” Roczen continued. “He was pushing really hard and I was pushing really hard and we were going for it pretty much the whole moto. The track layout wasn’t really my thing and I feel like I should have ridden better. I think I could have found better lines that would have made it easier on me but being the leader, it’s kind of tough. You take one wrong line and the guy behind you is catching right up, but it’s all good.”

Roczen’s RCH team-mate Broc Tickle turned in his best performance of the year and most formidable overall showing dating back to 2012. He finished sixth in the day’s first moto, won the holeshot in the second and went on the finish third to secure his place on the podium at day’s end. The third-place overall effort powered Tickle from 12th all the way to seventh in points where he’s now just four points out of sixth place.

“Obviously, I’ve been working hard and I haven’t had an overall podium since 2012 so it’s been a long time coming,” offered Tickle following the event. “The class is stacked right now so I can’t take anything away from anyone else. I felt awesome. I feel like I’ve been gaining momentum since I came back from being hurt during Supercross. It seems like when I get hurt, I get more motivated to come back and be better. Obviously, it’s not good to get hurt but I feel like I’ve finally gained that momentum I need. We need to finish the season strong and see what we can do. I just want to keep gaining momentum and see what I can do.

“It was awesome. I haven’t ripped a holeshot and led a lap since Supercross 2011 so it felt awesome. It gave me a lot of confidence and made me feel like I can do this every weekend. I feel like I just have to keep doing what I’m doing to make that happen.”

RCH team manager Kyle Bentley was quick to credit his riders following the team’s best collective overall finish to date but also offered high praise to the unsung individuals who work behind the scenes.

“It was a great day for RCH and the boys,” said Bentley. “It’s always gratifying to get a win but to have (Broc) Tickle get a third overall … it’s one of those things that the people who put in countless hours and endless days, weeks, months, even years, to have a day like this is something special. We’re going to take some time and enjoy this one.”