Roczen: The gate just dropped and I was on! 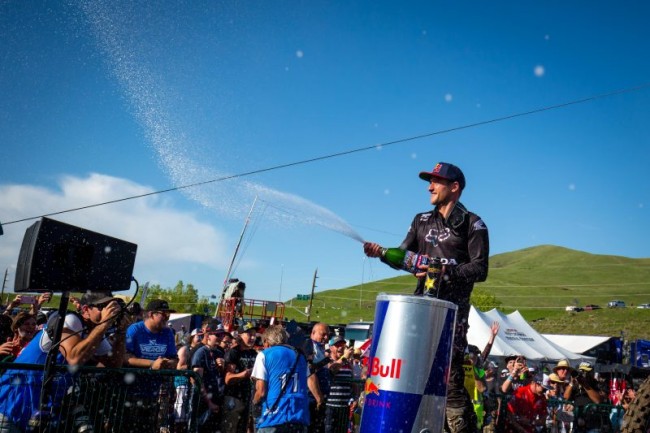 Ken Roczen 94
“I’m stoked to come away with another overall win and to get the red plate back. The first moto was awesome. I’m honestly not sure what happened; the gate just dropped and I was on. I like this track and the ruts, so something just clicked. I could really just make something happen quickly in the first few laps and get away from the pack. It was a good feeling to have a gap and finish the moto not having to worry about everything. The track was a lot gnarlier in the second moto. I led about half the race but then Eli [Tomac] and I had a good battle, then even when he went by I tried to stick right behind him. He obviously gapped me a bit, especially when we started to get into some lappers; there were a few sketchy moments with some of them. I tried my best to stay with him but also didn’t want to risk making too big of a mistake, so I just rode solid to the finish.”

Cole Seely 14
“This weekend definitely went better than the past weekends, but unfortunately it doesn’t really show that in the results. The first moto I felt like I had a really good flow and got into the zone. I started setting good lap times and picking my way through the pack. I went from 10th and almost passed into fourth before I fell over. I kind of knocked the wind out of myself because the bike just stopped in the rut and I went forward into the bars. I managed to get up and finish ninth. In the second moto I definitely didn’t have the same flow. I was just a little off and I think it was a combination of the altitude and being a bit tired from the first race. I just tried to push through it and tried to manage my energy and fight my way through, but I wasn’t able to put together the results I needed. I’m looking forward to continuing to build and get stronger.”

Erik Kehoe
Team Manager
“Today definitely feels great. Ken is riding really well and showing a lot of strength early in this championship hunt. He was so impressive in the first moto, making a quick pass for the lead, laying down some strong lap times and taking it to the checkers with a 35-second lead. The second moto was great too. Ken got another solid start and again put himself in front early. He and Eli ended up battling for the lead with Ken winding up second, but those two had gapped third by quite a bit. There is still a lot of racing to do, so we’re going to celebrate this victory and get back to work. Cole rode much better than his results show, especially in the first moto. He made some great passes and was really pushing forward throughout almost the entire race. He battled hard for fourth but went down and I think lost a lot of his momentum. We still need to improve his starts though because he struggled again in the second moto.”

Oscar Wirdeman
Mechanic (Ken Roczen)
“I think today was awesome. The first moto was like watching the old Ken from 2016. He got a good start and made quick passes for the lead then just checked out. Bike-wise, we didn’t have to make a lot of setup changes. Ken was pretty happy all day, so that was nice. We did have to swap a motor between races because Ken got a big hole in the ignition cover when he came together with a lapper. It was good that we had some extra time between motos, but it was all hands on deck and we busted it out pretty fast.”

Jordan Troxell
Mechanic (Cole Seely)
“Cole showed a lot of fight today in the first moto, which we haven’t really seen so far. He was not giving up and continued to make passes and was doing everything he could to get into fourth. Unfortunately, that rut caught him and was so deep. He got going again but seemed pretty deflated after that. He got a bad start in the se