Roczen talks about winning at Phoenix 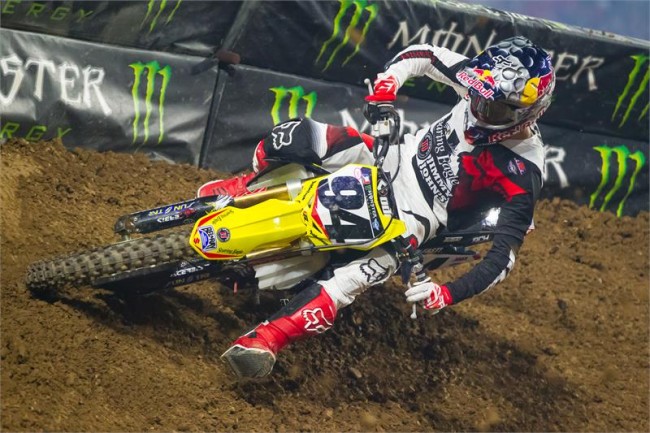 After an 18-race drought that spanned more than a year, RCH Suzuki Factory Racing’s Ken Roczen finally broke through and scored the win in Saturday night’s Monster Energy AMA/ FIM World Supercross fifth round at University of Phoenix Stadium in Arizona.

The RCH Soaring Eagle/ Jimmy John’s/ Suzuki Factory rider led the Main Event from wire-to-wire aboard his Suzuki RM-Z450 and took the chequered flag by just over four-and-a-half seconds ahead of Ryan Dungey. At the same time, Roczen took over sole possession of second in points where he now trails Dungey by 21 with 12 races left in the season.

Jake Weimer struggled on his No #12 machine for much of the evening and was ultimately credited with a 14th-place finish.

The win was Roczen’s third consecutive podium finish and marked his first trip to the top-step since the third race of 2015.

Said Roczen: “It’s amazing. For once, I only got peppered in the heat race (laughs). I felt great just to have a clear track and ride my own race. The track was something else. The track was much higher speed than it usually is and a lot harder than the previous races. It was definitely something different. That was the longest starting straight that I’ve ever done in a supercross race, which is pretty cool. I think it’s definitely more of a safer way and helps the field spread out a little bit so I really liked it.

“It was tough out there. I was a little too cautious in the whoops and that’s where I lost the most, but nothing to complain about. We got it done. The biggest thing is that it feels super awesome to finally be at the very top, finally, but we’re not done. We’re going to keep clicking them off and keep putting in work. We’re going to enjoy this and get back to work on Monday. The most important thing is to keep a steady program and not quit.”

While Roczen and company were able to let out a collective sigh of relief following the win, the 21-year-old German rider has no intention of taking the win for granted and knows where he needs to focus during the week.

“Finally the starts are getting better,” added Roczen. “We’re going to keep practicing so we can keep getting good starts and make life a lot easier. Everyone was in the house so it was great to win, especially in the new stadium. The new stadium is rad. It’s super big and the location is awesome.”

RCH co-owner Carey Hart was on hand in Phoenix Saturday night and hopes the win translates into momentum as the series rolls through the heart of the season.

“It was a great night,” stated Hart. “I was hoping to get a win and hopefully this means that Ken will be on a heater and he’ll win a lot of races. He was solid all night and his starts were great. His start in the Main Event was pretty much flawless. The track got really loose and he adapted well. Hopefully, this will translate into some momentum as we go back to San Diego and start to head east.”

Weimer’s night wasn’t quite as fortuitous as his team-mate’s but the Rupert, Idaho rider maintained a positive attitude and was ready to look ahead.

“It was a tough night,” Weimer explained. “All day was just a little bit of a struggle. I really struggled in the whoops and trying to get some confidence on that part of the track, in particular. We had some big whoops at an earlier round and I kind of struggled there. I need to improve on that. I crashed in practice so I was sore and had to deal with that. I think the bike is good. It was just me. I like the bike but I still need to work on a couple things. I was just a bit off but I know what I need to work on and we’ll be ready for San Diego.”

Monster Energy AMA Supercross returns to Petco Park this weekend when the series visits San Diego for the second and final time of the year.