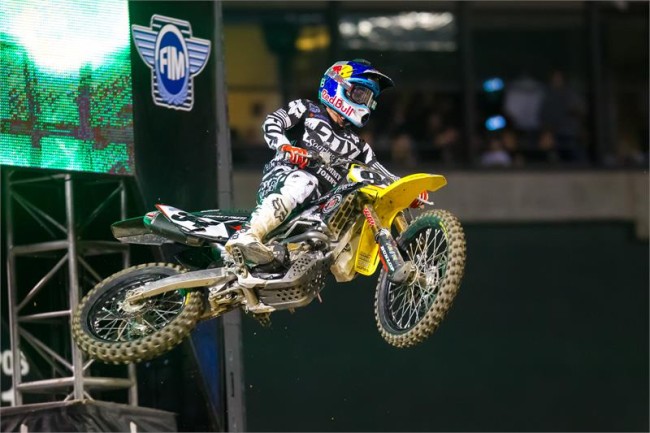 Soaring Eagle/ Jimmy John’s/ Suzuki Factory Racing’s Roczen earned a season-best second-place effort and jumped from sixth to fourth in the points-standings. It was Roczen’s second consecutive podium finish in the season’s first four races and the Suzuki RM-Z450 rider is now just two points out of second, trailing championship-leader and race-winner Ryan Dungey by 24.

In his first race competing under the RCH banner, Weimer matched his best result of the year and came home eighth. He maintained his stronghold on ninth in the series points and is only five from seventh in the standings.

Roczen was strong throughout the weekend, leaving no doubt the 21-year-old German rider would play a prominent role in the night’s action. He was the fastest rider in the day’s first practice, second-quickest in the second and transferred directly into the Main Event after finishing third in the first 450SX Class heat race of the night.

After struggling with his starts in the Main Event at the first three races, Roczen got a great jump when the gate dropped and worked his way-up to third before the halfway point of the first lap. By lap five, he was up to second – where he focused his efforts on Dungey for the rest of the night – and while he would ultimately go on to finish second to the defending Supercross Champion by just over three seconds, Roczen was the only rider who was able to keep Dungey in sight.

Said Roczen: “We’re making steps in the right direction. I’ve been working really hard on my starts. We made an adjustment to the clutch, which seemed to work a lot better for me on the starts. I didn’t get the holeshot but I was still somewhere up-front and it felt really good not to get blasted (by dirt) the whole time.

“I have to give it up to Ryan (Dungey). Three-in-a row is hard to do, especially with how deep the field is. He’s been on point with his starts and doesn’t make any mistakes. Bottom line is that he’s doing really good at the moment. Last weekend we were third, now we’re second. We’re moving in the right direction.”

Last week, Weimer was tabbed to fill-in for Broc Tickle after the rider of RCH’s No. #20 RM-Z450 was injured in a practice crash the week prior, forcing him to watch from the sidelines for the next four-to-six weeks.

In his first race aboard RCH’s No. #12 Soaring Eagle/ Jimmy John’s RM-Z450 – and first competitive ride on a Suzuki – Weimer turned-in a quiet-but-important eighth-place finish. While he had to race his way into the Main Event through the second 450SX Class semi of the night – where he won the holeshot and finished third – Weimer turned in his second eighth-place finish of the season and third straight top 10.

“It was a good night,” explained Weimer. “A lot changed last week. In the heat race, I missed-out from transferring straight into the Main by one spot so I had to come through the semi. I got the holeshot in the semi, which was cool, had just a few mistakes but got into the Main.”

Weimer rode a smart race and was a fixture in-or-near the top-10 throughout the 20-lap Main Event. As the night wore on and attrition became a factor, the 28-year-old showed his veteran savvy, capitalising as other riders began to fade, picking-up a couple of extra spots in the closing laps.

Following the event, Weimer said: “I was a little further to the outside on the gate (in the Main Event) than I wanted to be but still came-out with a decent start and then just had to fight for 20 laps. I never had a break the whole time. I felt like I rode a little tight in race conditions. That was the first time out for me on the new bike but I thought, overall, that it was awesome. The bike felt really good. The team was awesome and I thought we worked well together. I’m stoked on the bike. We had good starts and I matched my best finish of the year so I’m looking forward to getting some more time on the bike, working with the team; and seeing where we can go with this.”

Monster Energy AMA Supercross makes its debut at University of Phoenix Stadium this weekend when the series visits Glendale, Arizona and the home the NFL’s Arizona Cardinals for round five.