Roczen talks about his win in Toronto 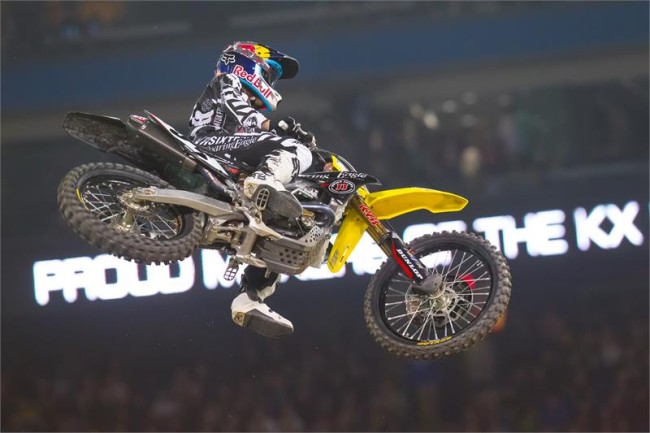 Ken Roczen carried the banner for RCH Suzuki Factory Racing on Saturday night as he piloted his Suzuki RM-Z450 to a dominating victory in the Monster Energy Supercross AMA/ FIM World Championship 10th round at the Rogers Centre in Toronto, Canada.

In 40 career 450SX class starts, Roczen has amassed eight wins, including a victory last October at the Monster Energy Cup. With his most recent win, the 21-year-old German rider was able to narrow the gap between himself and current series leader Ryan Dungey to 34 points with seven races remaining.

The 2014 Lucas Oil Pro Motocross Champion narrowly avoided disaster in the opening moments of the Main Event when a host of riders went down in the first rhythm section. Fortunately, Roczen came away from the multi-bike melee unscathed and quickly mounted his charge towards the front of the 22-rider field.

While Dungey may have grabbed the holeshot, it took less than three-quarters of a lap for Roczen to track down the defending series champion and just over a lap to reel in Eli Tomac and take over the top spot for good.

Roczen paced the field for 19 of the event’s 20 laps and would eventually build his lead to just over three-and-a-half seconds.

“I just stayed out of trouble and rode my race,” commented Roczen. “It was an amazing feeling being up front. It was a tough track out there. Even the start was tricky. The track was really slippery. I got a decent start and went around the first turn pretty good and I think someone went down in the second turn so I got really lucky right there. I made some good passes happen in the beginning and that helped me get a clear track so I could ride some good, fast laps. The track got really cupped-out so it was all about staying focused. Towards the end I had a good lead and just kept it safe and steady and took home the win. It’s awesome.”

Roczen’s RCH stablemate Jake Weimer raced his way into the Main event via a third-place finish in his Semi and ultimately went on to secure a solid 10th-place finish, his fifth top-10 of the season.

While the Rupert, Idaho native typically sets the bar higher than a top-10, the 2010 Western Regional 250SX Class Champion breathed a sigh of relief following the race after recording back-to-back 17th-place finishes in Atlanta and Daytona.

RCH Team Manager Kyle Bentley was pleased with the entire organisation’s efforts and was also quick to point out the challenges the Toronto racecourse presented.

“It was a good weekend,” added Bentley. “Anytime we go into a race, with the field stacked as it is, and (we) come away with the win is good for the team and RCH Racing as a whole. It’s good for Ken Roczen. We’re really happy. The track was difficult and had a hard-packed base. It had a little bit of loose soil on top of the surface and the whoops were the biggest ones we’ve seen this year. That’s a real separator of the field when you get whoops that size. That really separates the guys from one another. It was a good night for Ken and a good night for RCH.”

Monster Energy Supercross returns stateside this weekend when the series visits Ford Field and the home of the NFL’s Detroit Lions.