Roczen talks about his win at Millville 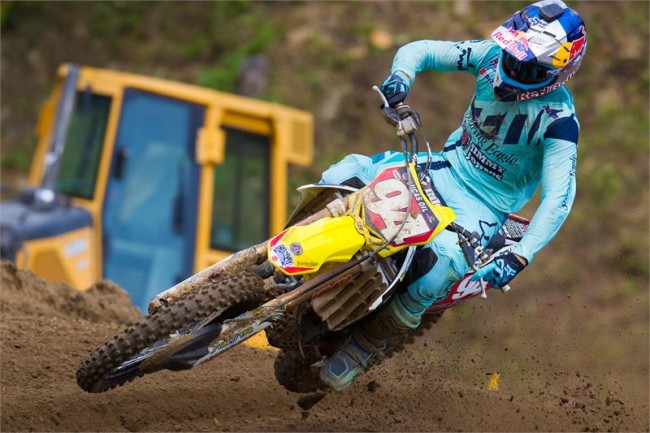 The 22-year-old German raced his # 94 RCH Soaring Eagle/ Jimmy John’s/ Suzuki Factory RM-Z450 to another double race win and increased his lead in the series to 55 points with four rounds remaining.

When the starting gate dropped on the first 450 Class moto of the day, Roczen secured his footing near the front of the field and spent much of the opening lap stalking Justin Barcia for second. After making the pass on Barcia, just before completing the first lap, he set his sights on Southwick winner Eli Tomac for the top spot.

The 2014 Pro Motocross Champion reeled-in Tomac near the one-third mark and never looked back. By the time the chequered flag waved on the first premier class moto of the day, Roczen had stretched his lead to nearly eight seconds before collecting his 12th moto win of the season.

While he was able to go two-for-two and win the second moto of the day and his13th of the season by almost 30 seconds, the victory came with a bit of a twist:

Said Roczen: “Took the first moto after some battling with Eli (Tomac). Second moto, we got off to a rough start. I almost went down and then in the second turn, I bent my shifter really bad and I missed shifting a bunch of times. It was pretty sketchy so I tried not to shift too much and ride a safe race. I fought my way to the front again and we came away with another win. That’s what we’re shooting for every single weekend no matter how big the gap is and we pulled it off.

“I’m a racer so my mind is just getting to the front. At first, I didn’t know what was going on. I mis-shifted and almost went over the bars twice. I was like ‘what the heck?’ And then I looked down and the thing (shifter) didn’t look right. So, from then on, I just kind of put my rear-end back and kept it in third and went wherever the other guys didn’t go to try and make passes.”

Unfortunately, Roczen’s brilliance was clouded when his RCH team-mate Broc Tickle was collected in a scary mid-race incident in the first moto. As Tickle and Weston Peick were racing for position, Peick cross-rutted as he approached the face of a tabletop causing his machine to veer to the opposite side of the landing area where Tickle was already committed. As a result, Tickle landed on top of Peick and neither rider was able to finish the race or return for the second moto. Tickle is expected to be on the starting gate for Round 8 at Washougal this weekend but will continue to be evaluated on a daily basis leading up to the event.

“I really like Millville and I was bummed with how the day ended-up turning-out but it could have been a lot worse,” Tickle said. “Practice went pretty well. I was really looking forward to the motos. I started the first moto in about 14th, made some passes and got up to about seventh. I was close to (Weston) Peick and he cross-rutted on this little tabletop. I went to the outside and he came across the track. I ended up landing on his head and both of us crashed and didn’t race in the second moto.

“It was a tough weekend for me. I didn’t want to accept not racing in the second moto but I felt like it was the best choice to make at the time. I’m going to get looked at this week and make sure there’s nothing too serious and hopefully head to Washougal, into the break, and hit the last three. I feel like I have some more podiums to get and that I’m capable of doing it. The focus for me right now is see what’s going on with my body, make sure there’s nothing too serious and go from there.”