Roczen talks about his podium at San Diego 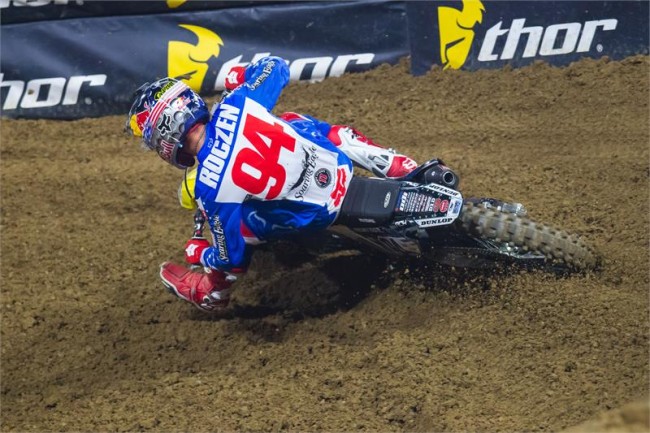 The top-three effort was Soaring Eagle/ Jimmy John’s/ Suzuki Factory Racing Roczen’s fourth consecutive podium finish: Over the last four races, the 20-year-old German rider has jumped from sixth to second in the standings, where he trails event winner and defending series champion, Ryan Dungey, by 26 points with 11 events remaining on the 2016 schedule.

Weimer maintained his grip on 10th in points following a 12th-place finish Saturday night and now sits 10 points behind eighth-place Justin Brayton and 15 back from Marvin Musquin in seventh.

Broc Tickle, rider of RCH’s No. #20 Suzuki RM-Z450, was sidelined for the third race in a row while he recovers from the wrist injury sustained in a practice crash last month.

While Roczen was pleased with his overall result, he noted the track presented its share of challenges and is hoping to smooth-out some of the rough-edges and mount a charge at the title during the heart of the season.

Said Roczen: “My weekend was actually a little rough. We struggled all day with the bike settings. I didn’t feel too comfortable. We were going back-and-forth with a bunch of settings so we had to work hard for it. We went into the Main Event with another little change and salvaged a third. Obviously we want to win but we’re on the podium and we’re healthy so that means a lot. We’re still in the championship hunt. I wish I would have ‘gotten Cole (Seely) for second, but the track was really tight in some spots so it was hard to pass. The dirt had a really hard base, so it was slippery. The whoops were tough again but we salvaged a third, which is alright.”

Weimer finished sixth in his heat and eighth in the Semi and had to race his way into the ‘Main’ via the Last Chance Qualifier (LCQ). After securing a starting spot in the Main Event by finishing second, Weimer turned in a workman’s performance in the feature but came-up a couple spots short of earning his fourth top-10 of the year.

“I had to race my way through the LCQ and finally got to the Main,” Weimer explained. “I was just trying to ride. I made a few passes and with like five laps to go, I was making another push to try and get inside the top-10 and just a mistake on my part and went down. I got back up and didn’t lose any spots but later that lap, a ‘lapper did something I wasn’t expecting, so I ran into him and went down again. It was a little bit of a tough night, results-wise, but I feel like this was an improvement from last weekend. We’re figuring some stuff out, so I’m feeling good about it. I would have liked better results but we’ll keep plugging away.”

RCH co-owner Carey Hart was in the paddock in San Diego and, for the most part, was pleased with his team’s effort.

“Overall, it was a good night,” said Hart. “I think everyone was uncomfortable to a certain degree. The track was very challenging. Ken did a good job of adapting. He had a decent start, but he just got locked-up with (Trey) Canard for a little while and that’s the difference. When (Ryan) Dungey starts up-front, you have to be able to come through. Ken did a great job. He didn’t feel great and we still got a third. We’ll keep plugging away. All in all, it was a great night. It was a rough night for Weimer but he fought through it. Both guys are top-10 in the points. We’re looking forward to getting-off the West Coast and heading east.”

Roczen, Weimer and the rest of the Monster Energy Supercross contingent dial-up a trip to AT&T Stadium this weekend when the series visits Arlington, Texas and the home of the Dallas Cowboys for the seventh of 17 rounds of the 2016 AMA/ FIM World Supercross Championship.