Roczen talks about getting second at Washougal 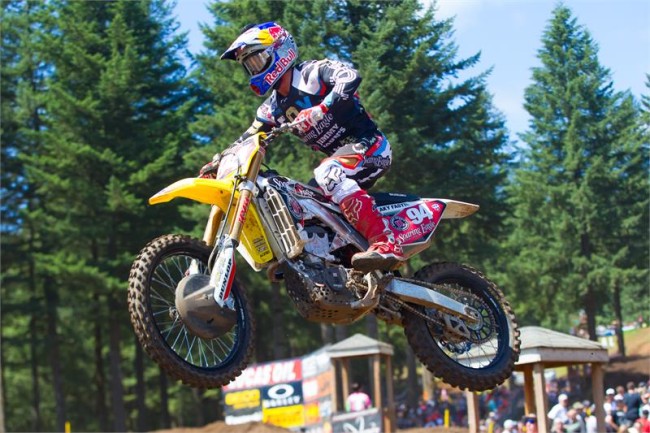 RCH Suzuki Factory Racing’s Ken Roczen turned in a 1-2 performance on Saturday afternoon and came away from the ninth round of the Lucas Oil Pro Motocross Championship with a solid second-place overall finish.

Said Roczen: “I’m pretty happy. Washougal hasn’t been one of my favourite tracks. I had a great first moto but that was the driest I’ve ever seen the track. Obviously, the sun and the shadows played a role later in the day so that was a little sketchy, too. Eli was just riding a great pace in the second moto so I was just kind of stuck riding in second. I didn’t lose any points to him so I’m glad to have another race done. I grabbed two good starts so overall I’m happy with the day. We’re going into a two-week break so I think that will be handy for everyone. It’s all good.”

Roczen’s RCH team-mate Broc Tickle didn’t compete in Round 9 after fracturing his pelvis last weekend at Spring Creek. As a result, Tickle will be on crutches for the coming weeks and will miss the remainder of the outdoor season.

Roczen and Tomac chased each other throughout the day and much like it has been during recent weeks, the duo were the class of the field. The 22-year-old German was second to Tomac in both qualifying sessions, but when the gate dropped on the first moto of the day, it was Roczen’s turn to show the way. After stretching his lead to over 10 seconds, the championship leader rode at a smart pace to capture his 14th moto win of the season.

While he would yield the victory in the second moto to Tomac, Roczen came away from Washougal content and ready for some downtime.

“My mom and my sister and little niece, they’re coming in,” Roczen said. “We’re going to hang out a little bit and do some hiking and mountain biking. All that kind of fun stuff. We’ll do that, go back to Florida and get to work. It’ll be good to take a little bit of a breather and be home on the weekend. If you count Supercross, we’ve raced 26 times in 29 weeks so we’re all ready for a little break. The biggest thing is not having to travel.”

RCH team manager Kyle Bentley was pleased with his team’s overall effort and approaches the final quarter of the 2016 season with a cautious but confident optimism.

“It was an awesome day,” commented Bentley. “It’s a bummer we didn’t have Tickle with us. We wish him the best and a speedy recovery. Kenny rode a solid day. A smart day. First in the first moto, second in the second one, so we push and don’t gain or lose any points. There’s six more motos to finish off the season and we’re looking to close it out strong. The only thing we need to change is if we’re going to swap like this, we need to win the second moto so we can take the overall for the day. We’re looking forward to the break and coming back at Unadilla on August 13th and finishing the year strong.”