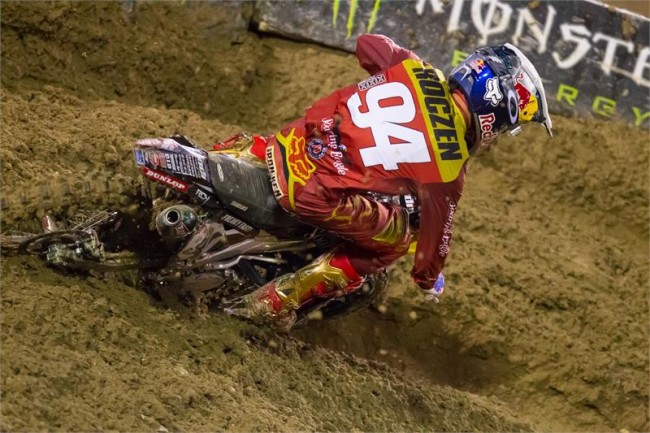 Ken Roczen made a key pass on Ryan Dungey early in the race and positioned himself to win his third straight and sixth Main Event of the year. Unfortunately, Roczen’s lead was short-lived after the 22-year-old rider tucked the front end of his RM-Z450 three corners later and was ultimately forced to park his bike after completing just six laps.

Still, it was a career best season for Roczen with the German-born rider not finishing outside the top six until the final round. Over that same stretch, he earned five wins, 11 podiums and 13 top fives, closing-out the 2016 indoor campaign second in points – another career best.

“It turned out to be a pretty big crap shoot with how much it rained but we made the best out of it,” explained Roczen following the event. “I had a good heat race and was feeling strong. I had a good start in the Main Event and was able to make a pass happen for the lead. Unfortunately, I hit the wrong rut and went down. After that, my bike was really bent up and we couldn’t get it straightened out so we had to call it a day.

“I’m healthy and ready for the outdoor season. I’m super-happy with the 2016 Supercross season, especially with how consistent we were over the last third of the schedule. Me and the team are really looking forward to the 2016 Lucas Oil Pro Motocross season.”

Roczen’s RCH stablemate Broc Tickle made the best out of the soupy track conditions and steered his RM-Z450 to a season-best sixth-place finish. Tickle was injured in a practice crash early in the year and only able to race in seven rounds.

“It went pretty well for me,” explained Tickle. “We had a big storm come in right as practice was ending so I knew it was going to be important to run the Main Event without crashing and to be as smooth as possible and minimize the mistakes. I’m normally pretty good in those situations. I qualified out of the semi and made some passes early in the Main Event so I was happy about that. I had some guys go down in front of me and ended up sixth. With the conditions as bad as they were, it seemed like the track was a lot like a motocross track so, for me, it was good.”

Jake Weimer jockeyed his Suzuki to a solid 12th-place finish to earn his 11th top 15 of the year but, more importantly, the Rupert, Idaho native was able to close out his 2016 Supercross effort with a hard-earned top-10 points finish.

“It wasn’t a bad day for me,” Weimer said. “I practiced and qualified decent. Obviously, all the rain kind of throws a wrench in everything and you don’t know what to expect. I had a good start in my heat race and as bad as the track was, I just kept telling myself ‘you have to qualify out of this’ because you don’t want to have to ride in those conditions any more than necessary. So, I made it out of my heat race and I was happy with that. I had a decent start in the Main but I fell on the first lap and fell again on the second lap. It was a little tough for me to get going because I was back in the pack but at the end of the race, I felt pretty good. I ended up 12th and ended the season 10th in points so, all things considered, I’ll take it. There are a couple of rounds I’d like to do again but all in all, I’m happy.”

Despite coming up short on the team’s eighth overall Supercross win, RCH co-owner Carey Hart was still pleased with the team’s performance.

“It was unfortunate,” offered Hart. “Ken was obviously quite a bit faster than Ryan (Dungey). It was a battlefield out there with the weather and how the track shaped up. He was riding good but all it took was one bite to put him down and that’s all she wrote. All in all, it was still a good night. Broc had a solid ride and Jake was able to finish out the season in the top 10.”

Fellow RCH co-owner Ricky Carmichael spent much of his evening as part of the live FS1 and FS2 broadcast team and, as a five-time Monster Energy Supercross Champion, knows that harsh environments are predictably unpredictable.

“It was exciting,” commented Carmichael. “A muddy Las Vegas track definitely adds a twist. In the 20-plus years that I’ve been coming to Las Vegas, I’ve never seen it like that. I was looking forward to a win with Ken and going out of the Supercross season with a bang but it’s still the best year RCH has ever had in Supercross so I’m proud of the team and everyone behind the scenes. That whole group deserves a lot of credit. I’m disappointed with how the night turned out but I’m really happy with the big picture.”

With only two weeks separating the end of the Monster Energy Supercross season from the beginning of the Lucas Oil Pro Motocross Championship, there won’t be much downtime for RCH. The team will campaign two Suzuki RM-Z450s outdoors with Roczen and Tickle at the controls.