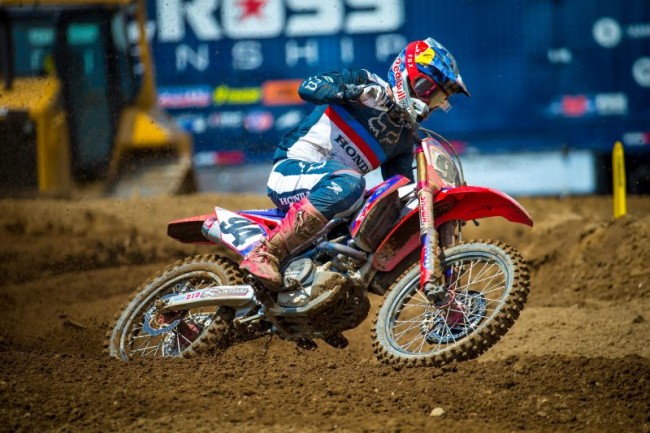 An always frank Ken Roczen admitted, ‘something isn’t right,’ after throwing up during moto one and suffering a lack of energy again at Red Bud.

Roczen, who feels the humid weather and brought the issue up again, wrote on social media: “it’s, the same thing I struggled with earlier in the year. I have to manage the week on a very low level so I can at least come to the weekend and give everything I have.”

Red Bud was a better weekend than the last couple. 6th & 3rd in the motos. I threw up in the first one with about 5 min to go so i had to slow down and let it all out and then finish it. I obviously haven’t been 100% . It is the same thing that i struggled with earlier in the year. I have to manage the week on a very low load so i can at least come to the weekend and give everything i have. My plan is to never leave anything on the table. That is what is important to me. I am waiting for further test results that will give us a clear answer. It is VERY frustrating. I am mentally ready to do what ever it takes to win. My body is not allowing me to do so though. Something isn’t right. Anyway, the crowd this weekend was epic as always. The support is very appreciated . Thank You 🙏🏼 @honda_powersports_us @redbull @foxracing @canyon @stancesocks @breitling @goartofsport @thefamilie.v2

Roczen then offered more observations on his issue in the Honda press release along with his team manager Eric Keble.

Ken Roczen 94
“It’s hard to be completely satisfied with the way that I’m feeling and how today went overall, but I’m happy with the second moto. Obviously, I haven’t been myself; it’s been a tough few weeks and we’re trying to figure it out. The first few races when it was cool out, it wasn’t as much of an issue, but with the heat and humidity, it’s been tough. I’m just going out there and doing my best. The first moto would’ve been okay too because I had worked my way into fifth but then I actually threw up with like five minutes to go. I let it all out and just finished the race but did lose time. The second moto, I got a much better start and just tried to do the best that I could for as long as I could. I’m happy with how I was riding and finishing third.”

Erik Kehoe
Team Manager
“I think today was definitely an improvement from last week. Ken showed a lot of speed, which he’s continued to do each week, but I think he managed his pace better throughout the motos. It’s still not what Kenny wants overall, but he had a good second moto and it was nice to see him end on a high note heading into the break. He would’ve had a solid first moto too, but he had some issues in the final laps that caused him to fall back a bit. He’ll take this weekend off and come back fighting at Millville.”