Roczen, Sexton and the Lawrence brothers on Millville 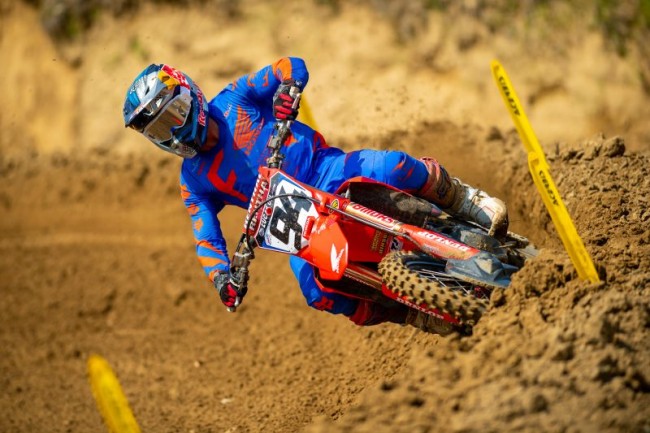 The AMA Pro Motocross series reached the halfway point of the season this weekend, with round 6 taking part at Millville, Minnesota’s Spring Creek MX Park, where Ken Roczen rode his CRF450R to the victory in 450MX moto 2, after overcoming a frightening moto 1 crash. The German tallied eighth overall on the day, with teammate Chase Sexton earning fourth overall in the same class. Meanwhile, their CRF250R-mounted colleagues, Jett and Hunter Lawrence, were fourth and fifth overall, respectively, in the 250MX class.

After the gate dropped in the first 450MX moto, Roczen was caught up in a first-turn crash that left him in need of medical assistance and forced him to withdraw from the moto. Sexton was also caught up in the incident but quickly remounted and made his way from the back of the pack to seventh. Luckily, Roczen was able to take part in moto 2, and he made some quick passes to move out front on the first lap. Sexton was sixth after one lap, but he advanced to third by lap 5 of 16. Roczen was unstoppable and secured his fourth moto win of the season, this time 5.3 seconds in front of overall-winner Justin Barcia, who was followed by Sexton.

The Lawrence brothers suffered poor starts in the first 250MX moto, but they advanced to the top five by the finish. Jett was involved in a moto 2 crash that included multiple riders and left him with a damaged motorcycle, but he still salvaged sixth, one behind Hunter. That put Jett just off the overall podium in fourth, with Hunter fifth.

Ken Roczen: “Millville was looking to be our weekend. We had the fastest qualifier in the second one, so pole position going into the start, and I was able to pick my gate. I had a pretty good jump right out of the gate, but we just got clobbered in the first turn. I had somebody ride straight into the side of me and really had to catch my breath and make sure that my ribs were okay. My bike was actually pretty destroyed too, so we couldn’t finish the first moto. It was a tough one and I’m really banged up and bruised up, but we were going back out for the second moto. With the 40th gate pick, I actually got a halfway decent gate on the inside; it wasn’t ideal, but I was making it work. I got off to a pretty decent start, snuck around the inside a couple of times and was in third, then second, and made quick work of [Justin] Barcia on the first lap and pretty much led the whole way through. I was pumped after a really hard get-off and being super sore. To come back and take that second moto was the one thing that we could do after a big crash, so I’m really pumped on how we at least ended it. It definitely hurt the championship, but at the same time we have to be glad that we’re healthy and ready to go again in Washougal.”

Chase Sexton: “Round 6 at Millville was a step in the right direction, for sure. I qualified well and felt a lot better on the bike this weekend–more comfortable. In the first moto, I went down with Kenny in the first corner, which was unfortunate after we qualified first and third. After that, I put my head down and made it back to seventh. I wasted a lot of energy coming from the back of the pack. In the second moto, I was able to find a good flow with the track and made my way back up to third and stayed there for fourth overall. Hopefully we’re trending in the right direction now and can keep this going into Washougal.”

Jett Lawrence: “Millville was not the best round. I came in feeling really, really good–really excited for this round. First qualifying went well; I was second and battling for first. Going into the first moto, I felt confident but messed up my start really bad; I was focused on really wanting to get a good start and just focused too much on that one thing and then ended up messing it up, so I screwed myself there. I came all the way back to fourth and was really hoping I’d get a better start in the second one, and I did. I felt like I got everything good on my behalf, but not the greatest gate pick, but it is what it is. I was making my way through and then got into some carnage, and I ended up running into [Pierce] Brown. I didn’t see him until the last minute and was like ‘Oh gosh,’ so I hit him. I feel bad for full-on hitting him, so hopefully he’s not too hurt or can at least race next weekend. That set me back to 12th, but I made my way through. I kept on charging and made my way through to sixth. It wasn’t the best weekend, but we’re going to go into Washougal with an open mind. We’re going to go back to some other settings that were better and really come out swinging and hopefully start getting on top of the box again to make sure the points leader doesn’t get too comfortable with the red plate.”

Hunter Lawrence: “Not an ideal weekend in Millville. I struggled personally and with the bike all day. Trying to get to the front was tough. I didn’t get the best starts and my gate picks could have been better for sure. We’re definitely back to the drawing board. We’ll just reevaluate, cross our t’s and dot our i’s and check everything over to make sure that we’re going to be ready to rock and roll and put ourselves in the best position for each moto at Washougal.”

Erik Kehoe: “Spring Creek was a tough race for the team. Our guys struggled to be consistent with starts this weekend, which cost us valuable points. Ken and Chase both crashed in the first turn of moto 1, but fortunately they were not injured. Sadly, Ken was hit so hard in the ribs that he couldn’t remount to finish the race. Chase rode hard and raced all the way back to seventh. Ken was able to rest between motos and get prepared for the second moto. Moto 2 starts were much better, as Ken was in the lead by the end of lap one and took the win. Chase pushed hard to finish moto 2 in third for a respectable fourth overall. Hunter and Jett both started midpack, and Jett was involved with a multi-rider crash in moto 2. His bike was damaged, but luckily he was able to continue and move up to sixth place by the end of the race. Unfortunately, when you start midpack that’s where a lot of trouble can happen, and Jett experienced that today. Jett and Hunter were able to finish fourth and fifth overall, respectively, for valuable championship points.”