Roczen, Sexton and the Lawrence brothers on High Point 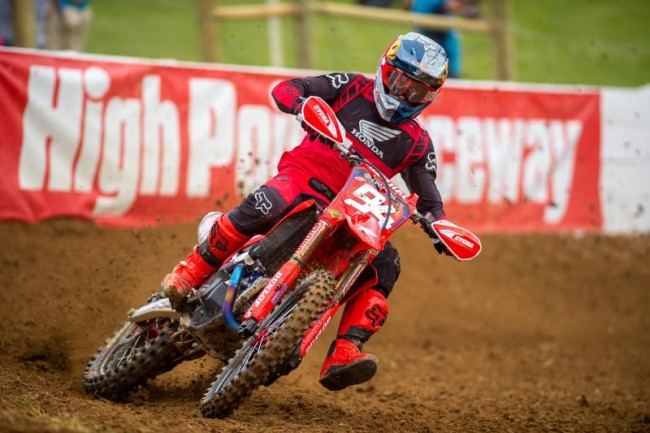 Following the first break in the 2021 AMA Pro Motocross series, round 3 took place this weekend at High Point Raceway in Mount Morris, Pennsylvania, where Team Honda HRC’s Jett Lawrence scored his third straight top-two overall finish in the 250MX class, with a 3-2 moto tally giving him second overall and extending his lead in the title chase. Meanwhile, 8-11 finishes put his teammate and older brother, Hunter Lawrence, eighth overall in the same class. The fierce competition in the 450MX division saw a tiebreaker place Ken Roczen fourth overall with 3-3 finishes, and Chase Sexton was fifth overall via a 4-5 moto tally.

After showing good speed in qualifying first and third, Roczen and Sexton carried that momentum into the first 450MX moto, with great starts putting Sexton in second, with Roczen close behind. The top three initially built a considerable gap on the rest of the pack, only for falls to cost both Honda riders positions. In the end, Roczen finished third, with Sexton just a second back in fourth. Moto 2 saw Roczen quickly make aggressive moves after a poor start, climbing to fourth by lap 4. By the 20-minute mark, the German was third, where he remained at the finish for fourth overall. Sexton ran in the top five for the majority of the race and finished fifth for fifth overall.

Hunter grabbed the first 250MX moto 1 holeshot but went off-track while negotiating a tricky downhill section, dropping him back to 28th. He forced his way through the pack to eventually finish with eighth. Meanwhile, Jett completed lap 1 in sixth place and steadily advanced to finish third. Jett got a much better start in the second moto and advanced to third by lap 2, then took over second two laps later, whee he stayed to the end and earned second overall. Hunter suffered an early crash and finished 11th .

Ken Roczen: “Today started off really good. I felt comfortable on the track, but we had a slightly different bike setup so in the first moto it really beat me up. I wasn’t that comfortable out there so I really couldn’t do that much. I still rode okay, but it wasn’t the best and I ended up third. In the second moto I was pinched off and had a really bad start. We did some adjustments to the bike that helped me out and I charged forward hard in the first half of the race and ended up having a good battle with Dylan [Ferrandis]. I ended up with another third place for fourth overall, which is kind of weird, but in the end, I’m okay with it because we rode really well and charged hard. That’s all we can do.”

Chase Sexton: “Overall, today was a little bit better of a day, qualifying third. I was running second behind Adam [Cianciarulo] for most of the first moto and then I hit a rock and fell over, so that was a bummer and I ended up fourth. In the second moto I just didn’t have much in the tank; I was pretty fatigued after the first one. I struggled a little bit during the week, but we have some time to rest now and get back to work.”

Jett Lawrence: “Today’s first moto wasn’t too bad. I was a little disappointed in myself because I made a little ‘boo-boo’ with my goggles. I thought I only had about two or three tear-offs over my roll-offs, but I ended up having seven. My vision was blurry until I figured it out and pulled some more of them off. I was able to make my way through and got pretty lucky with a few guys crashing out and ended up getting third, which is really good for one of my bad races. In the second moto I got a better start and made my way to second. I had a few goes at the leader, but was kind of in no-man’s land. It was too much to try and put an attack on, but I had heaps of room behind me, so I ended up playing it safe and gained one point this weekend, which is always good. I’m trying to make gains, so overall it was a good weekend for me in my eyes, for not having such a great day of riding. Hopefully we can just carry this onto RedBud, get a few wins and keep this train going.”

Hunter Lawrence: “Today was one of those days. Everything started off really good, except for the first-lap crashes in both motos! Starts were great, I was riding well and qualified second. I was up front in the first moto after getting the holeshot. I battled with Jalek [Swoll] in the first lap, but unfortunately, I gained a little too much speed downhill and crashed, putting me way back. My crashes ruined my overall results for the day, ending up eighth, but we’ll regroup and get ready for RedBud.”

Erik Kehoe: “The track conditions at High Point were fast and surprisingly dry considering the forecast of rain all weekend. Jett had a consistent day while finishing a solid second overall and gaining valuable points. After showing good speed and qualifying second, Hunter made some mistakes that caused him to battle through the pack to earn eighth overall. Ken and Chase both had great speed in qualifying first and third, respectively. Chase wasn’t feeling 100% from being sick last week, but still put in a solid effort for fifth overall. Ken’s starts off the gate weren’t great, but he made some aggressive moves in the first few laps to catch the pack of leaders. His consistent 3-3 moto scores earned him fourth overall, which shows how tough the competition is right now!”