Roczen, Sexton and the Lawrence brothers on Budds Creek 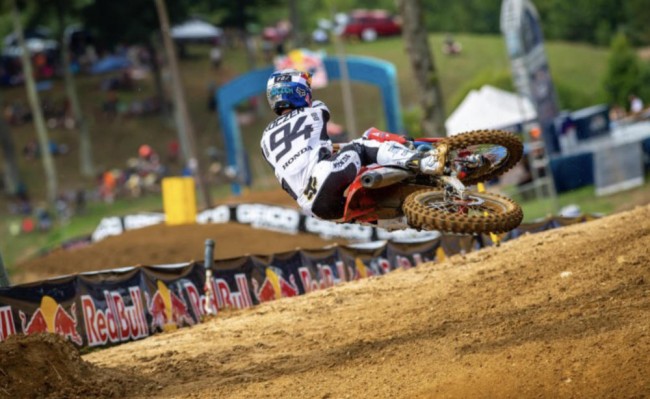 The AMA Pro Motocross Championship returned to Budds Creek Motocross Park this weekend, where rain threatened but gave way to warmer conditions and great on-track action. On a hot streak of his own, Team Honda HRC’s Ken Roczen qualified fastest and went on to take his CRF450R to victory in 450MX moto 1. Roczen followed his morning results up with a strong second-place finish in moto 2, earning the German a second-place overall result.

Following an equally strong ride in morning qualifying, Chase Sexton found himself right behind his teammate in both motos and fighting for the lead. The Illinois native powered to the podium in 450MX moto 1 and ended the day with a solid fourth overall via 3-4 moto results. Meanwhile, Jett and Hunter Lawrence finished second and fourth overall in the 250MX class, respectively. Jett’s second-place finish was the result of a strong qualifying performance and double podiums (2-2), while Hunter’s fourth marked the end to a more challenging day, the Australian rebounding from a tough first moto to finish third in 250MX moto two for 6-3 results.

After the gate dropped in the first 450MX moto, Roczen made a string of well-executed passes to charge from third into the lead. Teammate Sexton joined the group by way of hard passes that enabled him to jump from fourth to second behind teammate Roczen. Both riders showed great speed throughout the moto, with Sexton inching closer to the front until ultimately being passed by Dylan Ferrandis. Roczen went on to take the first 450MX win of the day, with Sexton finishing in third. The German rider carried his speed into the second moto, racing to the holeshot with Sexton close by in fourth. Sexton once again made a pair of strong passes in an effort to work his way to the front, though unfortunate mishaps relegated him to fourth, where he remained until the finish for fourth overall (3-4 moto tallies). Following an exciting battle between himself, Eli Tomac and Dylan Ferrandis, Roczen was passed by Ferrandis with less than seven minutes to go, the Team Honda HRC rider finishing a close second.

In the 250MX class, Jett Lawrence patiently made his way to third place before getting into a heated battle with Austin Forkner for second. Lawrence took the position, leaving him and Justin Cooper out front. Though having made a charge for the lead, Lawrence would ultimately have to settle for second, a result he would repeat in moto 2. Hunter Lawrence suffered a poor start and a series of other challenges in moto 1, which forced him to settle for sixth. Hunter bounced back in the second moto and rode to a solid third place finish for fourth overall.

Ken Roczen: Budds Creek was another really good weekend for us. It wasn’t quite the overall win, but we won qualifying again, and while you obviously don’t get points for that, it’s still nice. We had a really good first moto and got the win. We had a really fun second moto, where we battled with Eli Tomac and Dylan Ferrandis. I got second in that moto, so me and Dylan were split for the day and I got second overall. I didn’t really make up any points, but I feel like we put in a really good effort and like I rode well. It wasn’t enough to close in on the lead, but we still have three rounds to go and I’m looking forward to this coming weekend.

Chase Sexton: “Budds Creek came through with a fourth overall for me. It wasn’t the best day as I had really good speed but couldn’t put it together at the end of the motos, which is frustrating. I’m working really hard and trying to continue getting stronger. I’m looking forward to next weekend; Indiana is home soil for me and I’ve always enjoyed that track, so hopefully we can go out there and put on a show for the hometown crowd. I’m trying to improve this week and see if we can get stronger towards the end of the motos.”

Jett Lawrence: “Budds Creek wasn’t too bad for us; it was an up and down race day, really. We ended with a good finish and we gained a point, but I’m a little bummed about the second moto. I got a really good start and was second, but I just had nothing to give after that. Basically, I went to go play poker and I had no money to put down [laughs]. That’s tough, but again, we gained a point. We’re still in this championship and just have to keep fighting to get some good motos in over these next three rounds. We’ll keep on pushing and hopefully we can wrap this up. We’ll keep on fighting and give it all we got.”

Hunter Lawrence: “The weekend was okay, even if I’m not stoked with how the first moto went. We had a small issue with the clutch adjustment knob and one of the fork protectors, which managed to come loose. Finally, I ran out of tear-offs, so it was a bit chaotic. I was glad to bounce back in the second moto with a solid, clean race. I had a better start, put myself in a better position and brought it home for third. I’m happy with that and look forward to Ironman. I have a couple more chances to get an overall and will work hard to make that happen.”

Erik Kehoe: “The track conditions at Budds Creek were really good, considering the amount of rain that fell prior to the weekend. Jett’s consistent efforts paid off with a pair of seconds and second-overall finish on the day, which puts him another point closer in the championship race! Hunter’s start didn’t go well in moto 1 but he came back in moto 2 and rode hard for a third-place podium finish and 4th overall for the day! Meanwhile, Ken and Chase both showed great speed and their consistent starts put them in a good position to challenge up front in both motos. It was really cool to see both guys running 1-2 for almost half of the laps today and I know the team will continue to work hard to reach that goal of finishing 1-2 on the podium.”