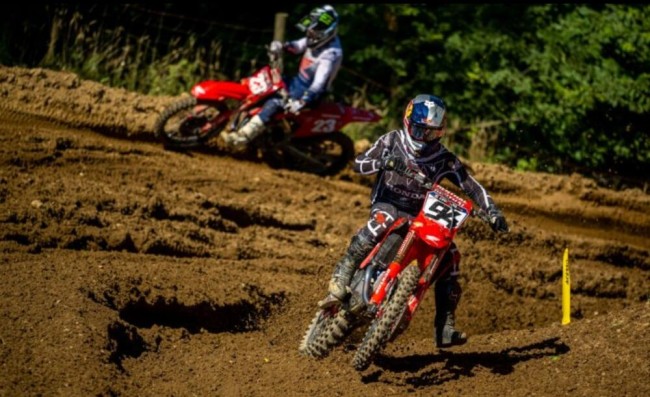 Ken Roczen said he really enjoyed racing his former teammate and good pal Ryan Dungey at High Point – even if he felt he was on a struggle bus with the German going 7-3 and losing some ground in the championship chase:

Roczen said: “It was a little bit of a struggle bus today. I didn’t really gel with the track really well, with how choppy it was. We’ve got to do better as a team; we’re going to go back and do some work. It was so awesome racing with Dunge; we found each other on the track in both motos. After he passed me, I stalled it at the top of track, and that gave us a big gap. The moto kind of went by pretty quick, and I saw the two-lap board and just wanted to fight for it again. That’s what I did, and with a couple of turns left, I was able to make a pass happen. Every point counts, so it was damage control this weekend, but we’ll go back and enjoy the off weekend but keep working.”

Meanwhile second overall (1-2) and championship leader, Chase Sexton commented: ““In the first moto I had the luxury of being able to ride my own lines; it felt like a practice moto for me, so that was obviously really good. When you’re out front on a track like this, you’re able to be more creative and take your time in places that are rough but charge in spots that are not. The second moto, I didn’t really feel like I rode that great, especially in the beginning; I was just kind of bulldogging and not riding super smooth. That was a little bit difficult, and then I made a mistake; I got by Kenny, he got me back and then Eli got me. I think ‘Dunge’ [Ryan Dungey] almost got me too, so I had to kind of kick it in gear there. I got Kenny and then Eli [Tomac] was pretty far ahead at that point. I just tried to ride as hard as I could, but it obviously wasn’t enough to win. It was a good day for me—the first moto was a dream moto and the second moto was a good fight. I’m looking forward to going into my week off and then going into my home race at RedBud.”