Roczen on a difficult Southwick 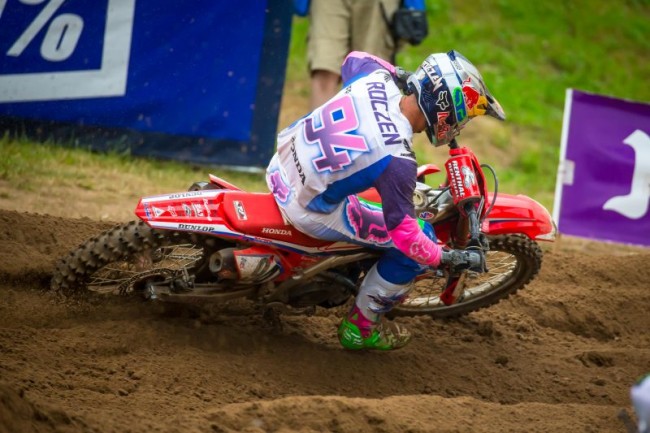 Although the warm, humid weather and rough, sandy track meant that Southwick, Massachusetts’ The Wick 338 National was anything but easy, what likely made things even more difficult for Team Honda HRC’s Ken Roczen were the absolutely brutal conditions of the previous week’s Florida National in Jacksonville.

So challenging was that event that it apparently reignited the endurance issues that had plagued the German for much of the AMA Supercross series, but that he had largely put behind him for AMA Pro Motocross, in which he had posted a pair of overall victories prior to this, the sixth round. Roczen once again showed impressive speed in the early going of both motos at Southwick, setting quick lap times and making strong passes, only for his physical limitations to then thwart his progress and see him overtaken by several competitors.

In the end, Roczen’s 12-10 scores held him to just ninth overall, but he and his team are determined to continue working for solutions in an effort to secure a strong second half of the outdoors season.

In the combined times from the two morning practice sessions, Team Honda HRC’s Ken Roczen ended up third-quickest, with a 2’08.332” lap in the second session.

Coming on the heels of the Florida National, Southwick was the second sand race in a row, and Team Honda HRC ran a similar setup on Roczen’s CRF450R. “This track has been becoming less sandy over the years, but we still put on sand tires and made minor suspension adjustments, just to make the bike a little more stable,” explained Roczen’s mechanic Oscar

Although he was disappointed with his results, Roczen posted the fastest time of any rider in the second moto, his 2’18.465” coming on lap three. He had the third-best lap time of moto one.
Even with Team Honda HRC’s Cole Seely on the sidelines recovering from his June 18 shoulder surgery, his mechanic Jordan Troxell made the trip to New England, where he lent a hand to Roczen’s mechanic Oscar

Seely’s first couple of days after surgery were difficult, as the operation was a little more extensive than predicted, but Troxell reported that his rider is up and around now. “He actually went up to the Mammoth Motocross,” Troxell added. “He had a couple of friends who were racing, so he decided to go up and check it out.”
GEICO Honda was hurt by mediocre starts at Southwick, but RJ Hampshire did a good job of recovering on the challenging circuit, notching 4-4 moto finishes for fourth overall in the 250 class. Hunter Lawrence had to settle for 11thoverall, whereas Chase Sexton had to sit out the second moto after finishing 13thin moto one, evidently still suffering the heat-related effects of the Florida National, where he also missed moto two after winning the first race.

Roczen slipped a spot to third in the points standings, two behind second place.

Up next for Team Honda HRC is next week’s RedBud National in Buchannan, Michigan, which traditionally hosts its AMA Professional Motocross event on Independence Day Weekend.

Ken Roczen 94
“I was coming into Southwick fairly excited, though struggling a little bit recovering from last weekend’s race. Still, I came in with full motivation and a new fork setting that unfortunately didn’t work out very well for me in the first moto. On top of that, I could’ve recovered a little better from the weekend before, but I knew that I went out there and gave my best. For sure it wasn’t what we were looking for, but we’re going to continue working hard on the bike and I’m going to continue working on myself to get back in top shape and get back to winning races. For now I have to take it as it is, but I’m going to keep my head up and hope for a much, much better result from RedBud. I’m going to do everything I can throughout the week to prepare myself and get back to the very top. Other than that, there’s not much to say about my result besides we’re not very happy with it and are looking to turn it around next weekend.”

Erik Kehoe
Team Manager
“It was a tough day, even if Kenny showed speed early on in both motos and his arms didn’t get tight in the second moto. Still, he was frustrated to not have the stamina to keep that pace up. For us, we’ve got to learn something from this weekend so that we’re prepared for next week; he looks to be having similar problems to what he struggled with in supercross, so we’ll get with his training team and figure out the next steps. The good thing is that the bike felt good to him this weekend, so Oscar and the guys did a good job with that.”

Oscar Wirdeman
Mechanic (Ken Roczen)
“The day started off good with Ken qualifying third-fastest. Unfortunately, I think he’s still feeling the effects of last week’s hot race in Jacksonville. He took it very easy this whole week, but coming here he was still tired. In the first moto he was up there going fast. Then, 10-15 minutes in he ran out of steam and basically just made sure he didn’t throw himself on the ground. He ran great in the beginning of the second moto because even though he got a mediocre start, he was closing in on the leaders. After that, it was the same as in the first race. Physically, he’s been struggling this whole year. The heat last weekend made it flare up again, so we’ll just try to get him some good rest and come back better for the next one.”