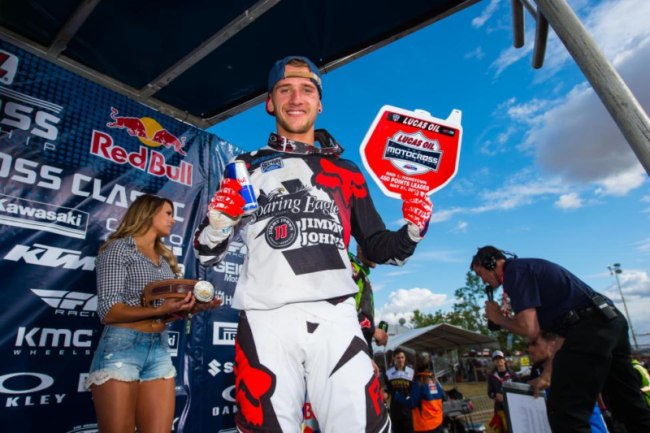 MORGANTOWN, W. Va. (May 24, 2016) – The anticipation of the opening round of the 2016 Lucas Oil Pro Motocross Championship, sanctioned by AMA Pro Racing, resulted in an action-packed afternoon of racing this past weekend to kick off the 12-round season. While RCH Soaring Eagle/Jimmy John’s/Suzuki Factory Racing’s Ken Roczen and Monster Energy/Pro Circuit/Kawasaki’s Joey Savatgy ultimately made the biggest statements at Hangtown by taking the overall win in the 450 Class and 250 Class, respectively, many riders thrust themselves into the battle at the front of the field, setting the stage for what is sure to be an even more thrilling second round this Saturday, May 28, at the FMF Glen Helen National from Southern California’s Glen Helen Raceway in San Bernardino.

The championship’s annual trek to the heart of the motocross industry of Southern California also presents one of its toughest challenges. Glen Helen Raceway is notorious for its dramatic elevation changes, high speeds, and tough terrain, which allows it stand alone as arguably the world’s toughest track. The riders will surely be pushed to their limits, but their familiarity with the facility, which serves as a popular destination for team testing, makes for a wide-open battle in which anyone can emerge victorious.

This past Saturday at the season-opening GoPro Hangtown Motocross Classic in Sacramento, California, Roczen, the 2014 series champion, put forth a dominant ride that sent an message to the entire 450 Class field. Just one year prior at the legendary facility Roczen began his title defense battling a back injury that would ultimately force him to come from behind throughout the remainder of the season. This year Roczen rebounded with a 1-1 moto sweep that gives him the best start of his career. It was the German rider’s seventh career win and his second Hangtown victory in three starts. As a result, Roczen sits atop the championship standings and will carry the red number plate as the points leader on Saturday afternoon.

Reigning 450 Class Champion Ryan Dungey was able to keep pace with Roczen’s hot start, posting a pair of runner-up moto finishes aboard his Red Bull KTM en route to his sixth straight second-place finish at Hangtown. Dungey put himself up front to start both motos and was able to keep pace with Roczen’s lap times throughout the afternoon, but Roczen’s ability to open a gap in the opening laps proved to be enough to keep Dungey at bay. It was a solid start to Dungey’s title defense and leaves him just six points behind in the 450 Class standings heading to a Glen Helen track he last won at in 2014.

Rounding out the overall 450 Class podium at Hangtown was Monster Energy Kawasaki’s Eli Tomac. Despite missing out on the podium in each moto, Tomac’s 4-4 results were enough to put him on the box once the overall results were tallied. Tomac’s speed was apparent all afternoon, but a pair of starts outside the top 10 prevented him from going head-to-head against his primary rivals and a ended any hopes of a repeat victory at Hangtown. Tomac faces a double-digit deficit to Roczen in the championship standings, but is the defending winner at Glen Helen. He’ll be dead set on putting the Kawasaki up front on Saturday afternoon.

Both Team Yoshimura Suzuki’s Blake Baggett and Rockstar Energy Husqvarna Factory Racing’s Jason Anderson earned moto podiums at Hangtown, but missed out on a spot in the top three at the end of the day. Baggett’s impressive come-from-behind run to third in the opening moto was subsequently marred by a crash in the second moto, which resulted in a broken collarbone. While Baggett’s status is uncertain, he’ll do everything he can to have a shot at lining up on the gate at his hometown race at Glen Helen. For Anderson, his day at Hangtown started with a solid sixth-place finish in the first moto, from which he was able to improve and finish third in Moto 2. He ended the day just one point short of a podium result but sits fourth in points heading into Glen Helen. Team Honda HRC’s Trey Canard finished fifth overall at Hangtown and rounds out the top five riders heading into this weekend’s second round.

Much like his 450 Class counterpart Roczen, Savatgy was undoubtedly the rider to beat in the 250 Class at Hangtown. The Georgia native broke through for his first career overall win last season at Unadilla, but prevailed without winning a moto. At Hangtown he enjoyed the best outing of his career and swept both motos to establish a sizeable advantage in the championship after just one round. Savatgy’s success at the season opener came largely as a result of stellar starts. He grabbed the holeshot in Moto 1 and went on to lead the entire 30-minute-plus-two-lap distance and slotted into second behind Troy Lee Designs/Red Bull/KTM’s Jessy Nelson in Moto 2 before making the winning pass late in the race. It was a breakout ride for a rider that is enjoying a breakthrough season and now brings an incredible 15-point lead into Glen Helen on Saturday. It’s the largest advantage a 250 Class rider has had after one round since Mike Alessi held a 12-point lead to start the 2006 season.

The battle for the remaining spots on the 250 Class podium unfolded between six riders who each had a chance to put themselves inside the top three in the overall classification. GEICO Honda’s Jordon Smith posted a career-best runner-up finish to start the day in Moto 1 and looked poised to finish up front again in Moto 2 until a crash early in the moto took him out of contention. Reigning back-to-back champion Jeremy Martin was in a similar position after he finished third aboard his Yamalube/Star Racing Yamaha in Moto 1, but a crash while battling with rookie Monster Energy/Pro Circuit/Kawasaki rider Austin Forkner ended his hopes. The misfortune for Smith and Martin left the battle for second and third between the Yamalube/Star Racing Yamaha trio of Alex Martin, Cooper Webb and Aaron Plessinger.

Webb’s fourth-place finish in the first moto gave him the upper hand heading into Moto 2, but a 14th-place start provided the opening his teammates needed. Martin bounced back from his eighth-place finish in the first moto with an impressive march to second in Moto 2, giving him the edge over Webb in the overall classification by just one point, which equaled his career-best second place result. Webb settled for third while Plessinger’s third-place finish in the second moto left him just two points off the podium in fourth. Jeremy Martin started his chase for a third straight title in fifth.

Savatgy will carry the red number plate for the first time in his career at Glen Helen, while the four Star Racing Yamaha riders look to track him down. Jeremy Martin enters Saturday as the only past winner at Glen Helen, which he hopes will work in his favor.