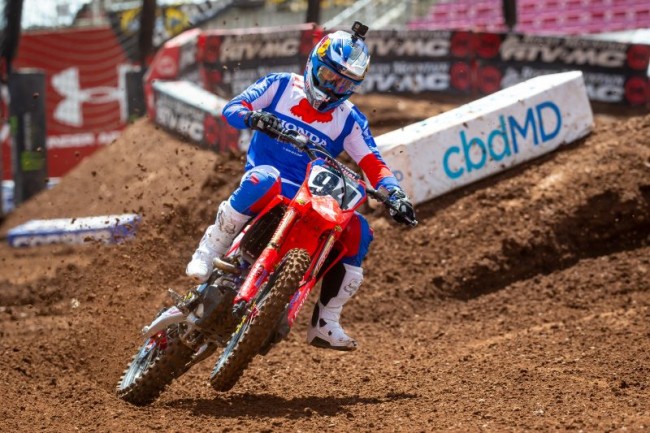 Ken Roczen 94
“The second-to-last race in Salt Lake City was a good one. I’d rather have it this way and put in a hard effort and not be good enough and get beat than have too many issues and drop off completely. I just wasn’t fast enough tonight. I tried really hard to at least get on the podium, and we were close, but just not enough, unfortunately. We put in a good charge. We’re going to come back in the last race and try to get to the very top step one last time for 2020. Overall, it was a very good effort from the team and on my side, especially after a heat race where I got parked because I had a big rut in my line and didn’t have the greatest gate pick. We put in a good fight and ended up fourth for the night. It’s not exactly the result we wanted in the end, but it was a great fight and that’s all we can ask for.”

Justin Brayton 10
“This was the best one yet for me. I had a great start in the main and ran second for a while. I was running up front and doing the laps that I wanted to do, running good lap times, racing with the guys I feel like I should be racing with. I’m pretty proud of this one. Sixth isn’t amazing, but overall from what I’ve been doing—starting 13th or 14th and coming to eighth, it’s much better to start second and run there for a while and get used to that pace again, then get passed by a few of the best guys in the world and end up sixth. Overall it was a good night for me. One to go—let’s do it!”

Erik Kehoe
Team Manager
“JB had a much better day all day, building some confidence, getting better starts, running up front where he knows he’s got the speed to run. He finally got a good start in the main event and put a good race together. Ken rode really well too. His start wasn’t quite as good, but he rode hard the whole time. I know he’s putting out a lot of effort right now, with everything that’s been going on. I think he had a really solid ride the whole main event, and now we’re taking it to the last race”