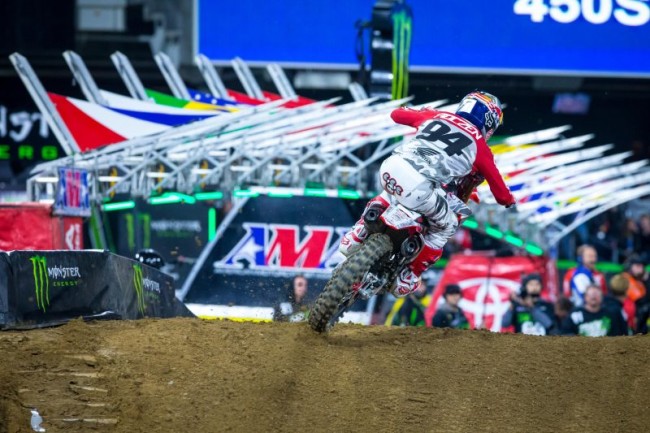 Ken Roczen’s motivation for racing the MXDN was revealed in more detail on Saturday but it might just be his real motivation is to beat his long-time rival, Jeffrey Herlings!

“It’s pretty simple, I am in a good position, there are no team switches or anything like that.” explained Roczen at Saturday night’s press conference in San Diego. “Every year I want to race it but the last couple of years it didn’t play out to where I was ready to go, because I want everything on point and 100% perfect to go there and race and win and not just go there just to go. So right away when I rode the bike and everything was going in a good direction, I decided I was going to commit.”

It seems Roczen wasn’t sure he could go and win the years previous against the MXGP regulars, but now he feels, with factory Honda behind him and a bike he loves, that he can get the job done.

But there are two other reasons to factor in.

Of course Roczen also knows Matterley Basin isn’t Herlings’ favourite track, so it all seems to line-up with Ken feeling he will have the advantage on Herlings and be perfectly placed to beat his long-time rival.

Herlings it appears has usually had too much respect for Roczen and, despite having the same speed or sometimes faster, it seemed back in 2011 Herlings would never fully believe he could beat the German outside the sand races. Six years on it will be interesting to see if Herlings now believes he can beat Roczen anywhere, and with his talent he should, because Roczen clearly doesn’t have quite the same level of respect for his long-term rival!

Yes, one weekend at the MXON on Roczen’s favourite track against Herlings (and Gajser, Cairoli, Febvre and co.) will be awesome, but how cool would it be to have Roczen come back and really test himself against Herlings and the rest of the best for a full MXGP season?

Does he want to kick Herlings’ ass that badly that he will eventually come back and take him on in MXGP once he wins a supercross title? Let’s hope so, because the racing between those two over a GP season plus a motivated Gajser might just take things to a level never seen before in motocross!