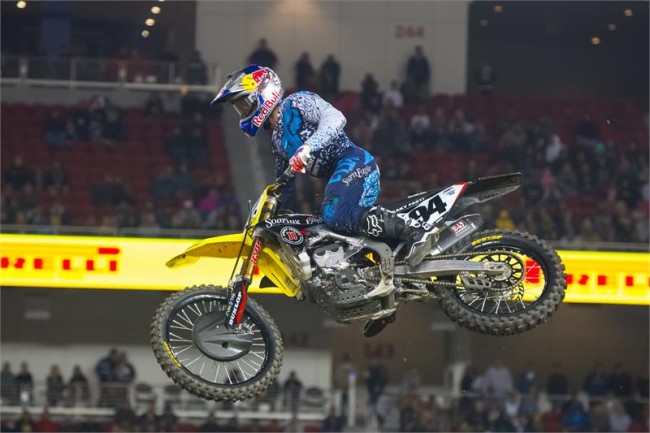 RCH Soaring Eagle/ Jimmy John’s RM-Z450-mounted Roczen, a seven-time Monster Energy Supercross winner, finished second and posted his seventh podium finish in 12 races. The impressive effort was also his 12th straight top-six in as many races. Weimer bounced back from a trying night in Detroit two weekends ago and despite having to push through nagging shoulder pain throughout the day, notched his sixth top-10 of the season. The solid outing also marked the sixth time this season that both RCH entries earned top-10s.

Roczen transferred directly into the Main Event after being credited with his third heat win of the season.

The 2014 Lucas Oil Pro Motocross Champion waged a spirited battle throughout the Main Event with eventual race winner and points-leader Ryan Dungey but difficulty negotiating lapped traffic ultimately hindered Roczen’s quest for his fourth win of the year. Roczen is second in the championship and trails Dungey by 42 points with five races remaining.

“It was a really good night for me and the team,” commented the rider of the No. #94 Suzuki RM-Z450 following his second runner-up finish of the year. “We made a bunch of changes during practice and that paid off. Had a great heat race and was able to win so I went into the Main Event pretty confident. I grabbed a decent start and made a couple of passes in the first lap. I caught up to (Ryan) Dungey and we battled pretty hard for a while. I was faster in some spots on the track until we got to the lappers and they ended up separating us a little bit. I tried towards the end to make another charge but it wasn’t enough.

“We ended finishing in second place, which is ok because we were really good all night. That’s ultimately what it’s all about. We had a great battle for the lead and I ended up second this time. Overall, it was a good night. We’re going back to Florida to put in a good week of work so we can come back strong next week in Indy.”

Weimer qualified for the Main Event via a fifth-place finish in his 450SX semi-final. He rode a smart, consistent 20 laps in the Main Event to bounce back from his struggles two weeks ago and post an important top-10 finish. With five races left, Weimer is tied with Davi Millsaps for 10th in the series points.

“Overall, to end the night with a top-10 is a positive, especially with the last couple of weeks that I’ve had,” explained Weimer. “I’ve been dealing with my shoulder and there was the question if I’d be able to show-up in Santa Clara and race. It was good to have the break when we did, but it was hectic with everything that was going on. I didn’t have the best day in practice but I’m happy to be able to come out of here with a top 10. I’m just going to keep working.”

RCH team co-owner Carey Hart was trackside in Santa Clara and was pleased with his team’s showing at Round 12.

“It was a great day all the way through,” said Hart. “Ken rode really strong. The Main Event was amazing. Ken and Dungey were flawless. Dungey got a great start and got out in front of Ken; and then Ken did everything he could to chase him down. We had to settle for second but I’m really proud of how Ken and Jake both rode. Jake had a bad get-off in Detroit and there were some questions about his shoulder, so it was great to see him power through the aches and pains. We’ll come out swinging again next weekend in Indy.”

Monster Energy AMA Supercross rolls on this weekend when the series visits the “Racing Capital of the World” for its annual tilt at Lucas Oil Stadium in Indianapolis for the 13th of 17 races on the 2016 Supercross schedule.