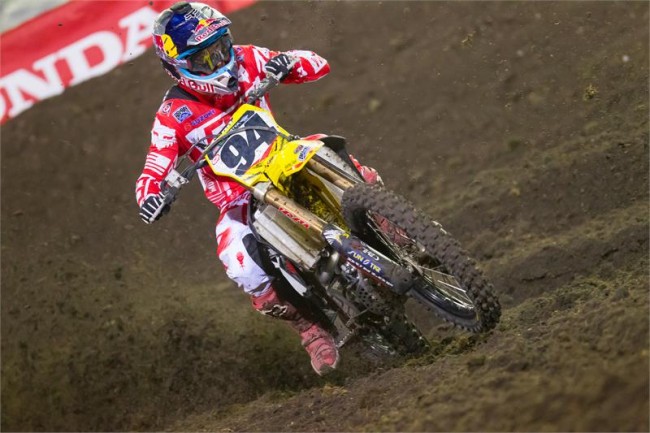 While a top-five finish would be a welcome showing for most teams in the paddock, the ultra-competitive nature of the entire RCH organisation left the team co-owned by Carey Hart and five-time Monster Energy Supercross Champion Ricky Carmichael wanting much more.

“It wasn’t the weekend we wanted,” said RCH Soaring Eagle/ Jimmy John’s/ Suzuki Factory Racing’s Carmichael following the event. “It’s definitely frustrating but that’s life and you go on. It’s certainly not from a lack of hard work or people not trying. Everyone is working hard. I have 100 percent confidence in our riders and our crew. We just have to keep plugging away. I know everyone is committed and giving it 100 percent. From a team owner’s standpoint, that’s all we can do. We’re going to keep on doing the best we can and providing our riders with the best equipment we have. We’ll keep giving Ken and Jake the tools we think they need to give them the best opportunity to win.”

Roczen was the fastest rider in the day’s opening practice and transferred directly into the Main Event following a fourth-place finish in the first 450SX heat race of the night. Unfortunately, a bad jump out of the starting gate in the Main event left the 21-year-old German rider deep in the field after the gate drop but a spirited ride afforded him his seventh top five of the season.

“Definitely not what we were expecting,” offered Roczen. “I didn’t get the best jump. I actually got pretty lucky in the first turn but I couldn’t do the triple because I didn’t think the person in front of me was going to do the jump, so I ended up not jumping. The track was tough so it was hard to pass. By the time I had a clear track, there was a big gap to the front that I tried to close but I just ran out of time. We’re going to work on the bike a little bit this week to try and get it better. Other than that, I’m going to keep doing what I’ve been doing. I felt really good fitness-wise. I’m not too satisfied with a fifth-place finish so I’m hoping for better results next week in Toronto.”

Weimer finished 11th in his heat but transferred into the ninth Main Event of the season via a fourth-place finish in the second 450SX semi-final of the program. Much to his chagrin, the Rupert, Idaho native had a rough time of it in the Main and would ultimately soldier home to finish 17th.

“Just a tough day,” explained the rider of the No #12 Suzuki RM-Z450. “I had to fight my way through the semi to get in the Main. I didn’t get the best gate pick but I was in pretty good shape until I ended up going down. The track was really tough so the start was important and I didn’t really execute or put myself in a good position. It ended up being a tough night. I feel like I’m riding well during the week and I feel good on the bike. I’m just not executing very well on Saturday so I need to do a better job of that.”

Monster Energy Supercross travels north of the American border this weekend when the series returns to the Rogers Centre in Toronto, Canada.