Roczen back on top! 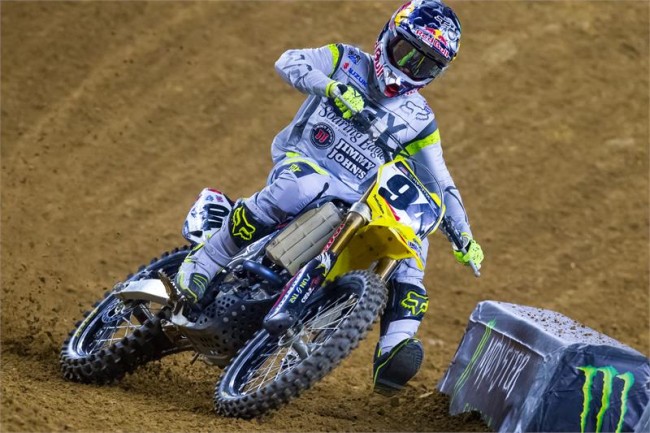 Roczen and defending series champion Ryan Dungey waged a spirited duel throughout the 20-lap Main Event and when the chequered flag waved on the seventh race of 2016, the 21-year-old German came out on top, winning by the narrowest margin of victory this season.

Roczen picked-up his first Holeshot Award of the year and only yielded the point to Dungey once before snatching the lead back on lap two where he held down the top spot for the rest of the night.

Said Roczen: “I think I have more wins than Holeshot Awards. It was great to get that one. Me and Ryan (Dungey), we battled the entire time. He passed me. I passed him back. It was tough out there. We had some good traction and in some parts we had some slick spots. They had the triple. They had a little double on the inside that was really hard to make. You had to get a good lift and just land in that pocket and make it. It was tough. It was a good race. He was pushing hard. I was pushing hard and we won it. It (the track) was tight in certain spots. It made for some good racing. I hope the fans enjoyed it.”

With the win, Roczen picked-up three points on Dungey and now trails the current points leader and defending series champion by 23 heading into next weekend. The win was especially satisfying for the six-time Supercross winner after having struggled with the mechanics of his race starts for much of the first seven races.

“We won it,” added Roczen following his fifth straight podium and second win in three races. “We got the start. I think he (Dungey) was right behind me and we battled the whole way. My Soaring Eagle Jimmy John’s Suzuki got me off to a great start and that’s what we wanted and needed and we got it. The championship is still good. We only made-up three points but we’re going to keep fighting until Vegas, that’s for sure.”

Despite a 10th-place finish and his fourth top-10 of the season, Roczen’s RCH team-mate Jake Weimer was critical of himself following round seven. The Rupert, Idaho native struggled during practice and had to race his way in to the Main Event via the first of two 450SX semi-final races.

“I’m not happy but I’ll take it,” explained Weimer who held down his 10th-place position in the championship. “I’m getting to the point now where we’re testing some stuff and we’re figuring some things out and I show up expecting more out of myself. It has nothing to do with the team, it’s just me wanting to be better. I end up trying too hard and I end up stressed-out. It was kind of a weird day, and rough. I’m just trying to sort through it and build.

“I’ll take it, for sure. I’d just like to have a good day, the whole thing, which I haven’t yet. I would like to have a good day where I have three good practices before I get to the Main. If I can do that, I think it’ll help me by the time the night show comes around. So, I have some things to work on. We’ll try some different things during the week and work on getting better for Atlanta.”

Roczen, Weimer and the rest of the Monster Energy Supercross crew continue east this weekend when the series visits downtown Atlanta for its annual visit to the Georgia Dome for round eight of the 2016 Supercross Championship.