Roczen and Savatgy unbeatable at Hangtown! 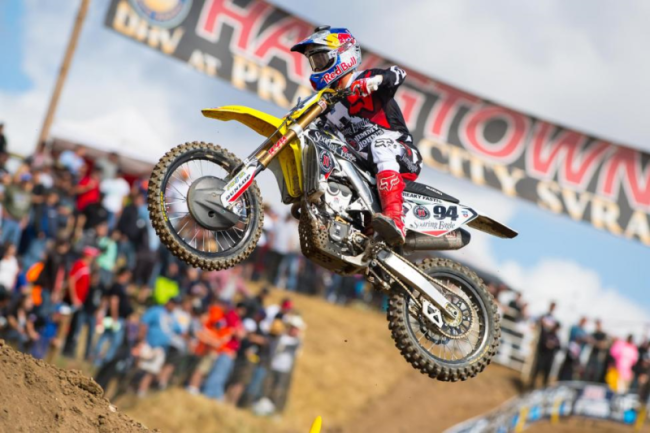 SACRAMENTO, Calif. (May 21, 2016) – The Lucas Oil Pro Motocross Championship, presented by AMA Pro Racing, kicked off its 2016 season on Saturday afternoon with the 48th Annual GoPro Hangtown Motocross Classic at Prairie City SVRA. In the premier 450 Class, RCH Soaring Eagle/Jimmy John’s/Suzuki Factory Racing’s Ken Roczen made a strong opening statement in his quest for a second title, dominating both motos en route to his seventh-career win. In the 250 Class, Monster Energy/Pro Circuit/Kawasaki’s Joey Savatgy swept the days motos to secure his second career victory and seize control of the early points lead.

The first 450 Class moto of the season saw Team Honda HRC’s Cole Seely edge out his teammate Trey Canard for the holeshot, with defending champion and Red Bull KTM rider Ryan Dungey in third and Roczen fourth. The four riders jockeyed for position, with Roczen ultimately making several impressive passes to move into the lead on the opening lap, with Canard second, Seely third and Dungey fourth. The clear track allowed Roczen to set a torrid pace early, opening a multi-second lead over the field. Dungey battled his way into second by Lap 2 and was able to erase some of his deficit to Roczen, but was ultimately unable to get close enough to mount a challenge.

Early misfortune for Canard allowed Seely to settle comfortably in third, which he held on to for the majority of the moto, but in the late stages Monster Energy Kawasaki’s Eli Tomac had fought his way from a 12th-place start to challenge Seely for third, making the pass on Lap 13. One lap later Team Yoshimura Suzuki’s Blake Baggett, who followed Tomac past Seely into fourth, got around Tomac for third and carried it through to the finish. Roczen took the win just over six seconds ahead of Dungey.

Dungey surged to the front to start Moto 2, securing the holeshot over Roczen, but was unable to keep his Suzuki-mounted rival behind him as Roczen made the pass for the lead on the opening lap. Once out front Roczen was able to duplicate his efforts from the opening moto and built a comfortable lead. Autotrader/Monster Energy/Yamaha’s Justin Barcia started the moto in third but soon engaged in a battle with Rockstar Energy Husqvarna Factory Racing’s Jason Anderson for the position, with Anderson getting the upper hand on Lap 5. The top three went unchanged from that point on. Roczen took the win just under 15 seconds ahead of Dungey, with Anderson nearly 30 seconds back third.

Roczen’s 1-1 effort gave him his second win at Hangtown.

“We’re in a way better position than we were last year [when I came in hurt]. That’s all behind us and now I can go out and can focus on my riding. I’m really happy with the bike,” said Roczen. “I’ve always done well at Hangtown, but today [the track] was really different. It [had notches] and was hard in certain spots. It’s nice to get the first [race] out of the way. I want to bring [my best effort] every single weekend. I played catch up last year [with the injury], so this season I have a chance to start fresh and build momentum. I’m glad I put myself in a good position, but it’s still a long year.”

Dungey finished in the runner-up spot (2-2) for the sixth straight season. Despite a pair of fourth-place finishes, Tomac rounded out the overall podium in third.

“Overall today was really good. Two seconds is good, but when you look at both races individually we were able to close down on [Roczen’s] lead in the first moto. In the second moto he was able to get ahead of me and really [open a] gap. I started to figure out some new lines and closed in again, which is encouraging. I really was trying to adapt to the bike and find that comfort today. I don’t typically do that, but I trust everyone at KTM and know we’re where we want to be. Round 1 was good and we’re going to get better week by week.”

After posting the fastest lap in 250 Class practice, Savatgy kicked off his winning afternoon by racing to the holeshot in the opening moto, with GEICO Honda’s Jordon Smith in tow. Behind them, the Yamalube/Star Racing Yamaha tandem of Cooper Webb and defending champion Jeremy Martin slotted into third and fourth. With an open track ahead of him Savatgy was able to establish a gap over Smith, who asserted himself in second over Webb, while Martin stayed close to the rear fender of his teammate.

While Smith kept him in sight for the duration of the moto, Savatgy never received a serious challenge for the top spot and went on to lead all 17 laps of the 30-minute-plus-two-lap moto for his first career moto win. Smith rode solidly in second the entire moto for his best career effort. Webb and Martin engaged and a close battle for third with Martin, winner of the past two Hangtown races, making the pass late in the moto on Lap 11 to steal the final spot on the podium from his teammate.

Moto 2 initially began with Troy Lee Designs/Red Bull/KTM’s Jessy Nelson taking the holeshot, with Savatgy mired deep inside the top 10. However, a crash on the opening lap brought out a red flag, halting the moto and resulting in a restart. When the field roared out of the gate for the restart Nelson put his KTM out front again, but this time Savatgy was able to slot into second with Smith in third. Nelson and Savatgy established themselves as the lead duo but Smith started to come under fire from Monster Energy/Pro Circuit/Kawasaki’s Austin Forkner, who was making his Lucas Oil Pro Motocross debut. Forkner pressured Smith for several laps and moved into podium position on Lap 5. Two laps later Smith went down while running fourth and dropped to 10th. As the top three continued their run to the finish, Yamalube/Star Racing Yamaha’s Alex Martin was on a march to the front. After starting sixth, Martin was able to pass his younger brother Jeremy for fifth early in the moto and proceeded to take over fourth with Smith’s misfortune. He closed in on Forker for third and moved into podium position on Lap 8. That placed Forker into the clutches of Jeremy Martin, who made contact with the rookie on Lap 9 as they battled for fourth, dropping Martin to ninth.

Two laps later on Lap 11 the battle for the lead intensified between Nelson and Savatgy, with the Moto 1 winner getting the upper hand to put himself in position for the 1-1 moto sweep. Shortly thereafter Nelson was forced to battle Alex Martin, who moved into second on the following lap. Nelson would continue to lose positions in the closing laps, with Yamalube/Star Racing Yamaha’s Aaron Plessinger taking over third on Lap 13. Martin had Savatgy in his sights over the final two laps but couldn’t mount a challenge for the lead. Savatgy went on to take the checkered flag and cement his overall win by just over a second. Plessinger followed closely in third.

When the overall results were tallied Savatgy easily claimed his first win at Hangtown.

“I hate the first round so much because there’s so many unknowns. You feel good, but you don’t know where you’re going to be until the gate drops,” said Savatgy. “We started good in practice and then got the holeshot and led every lap of the first moto. We got another good start in the second moto and waited until the right opportunity to get by Jessy [Nelson]. My goal this year is to be on the podium [each week] and not throw it away [with a bad race]. There are a lot of good dudes in this class and you don’t want to be behind the eight ball. There’s not really anything to complain about. It was a perfect day.”

Alex Martin’s strong performance in the second moto vaulted him into the runner-up spot overall (8-2), while Webb emerged with third overall (4-5) in a hotly contested battle for the final spot on the podium.

“We started with a smooth, fast track in practice, so it wasn’t a good indication of the day. I finished about eighth in the first moto, but that wasn’t what I was expecting,” said Martin, who tied his career-best effort. “I got a great start in the second moto, but then they red flagged it. I still got a decent start the second time around about sixth or so and just kept charging. I eventually got up to the lead group of guys and battled with them. I’m really happy with how everything went.”

Savatgy’s dominance helped him open a healthy lead in the initial 250 Class point standings, which sits at 15 points over Martin and 16 points over Webb.