Roczen a subdued sixth in Altanta 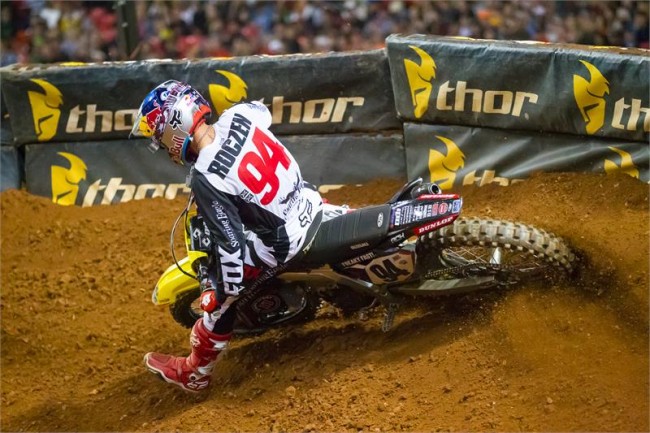 Roczen won his heat race and rallied to ride a smart 20-lap Main Event, bringing home his ninth consecutive top-six finish of the season aboard his Suzuki RM-Z450. While he was ultimately a victim of the opening scrum to get the first corner in the feature and had to come from deep in the field, the solid effort kept the six-time Monster Energy Supercross winner firmly entrenched in second in points where he trails championship leader and race winner Ryan Dungey by 33 points.

Following the event, Roczen talked about his night and looked ahead to the coming weekend.

“Going back to Florida and we’ll work on getting ready for Daytona,” said Roczen. “We’re going to have a Daytona section which will help us get used to the track a little bit more. We’re going to keep on working on the same things. I’ve been feeling really good. I’m going to put in good laps this week, eat clean and get a bunch of rest to be ready for Daytona. Obviously, we didn’t have the night we wanted in Atlanta but we’re going to bounce back. We’ll come to Daytona, try and be aggressive and hopefully leave there with the win so we can make up some points.”

Roczen’s RCH team-mate Jake Weimer struggled with the handle on his machine for much of the night but still locked in his place on the starting gate for the Main Event after winning the 450SX Last Chance Qualifier (LCQ). Still, Weimer couldn’t find a comfort level with his machine and ended up 17th when the chequered flag flew on the eighth race of the season.

“It was a struggle,” explained Weimer. “I don’t know why but I’ve been showing up on the weekends and just not riding that well. I’m going to have to think about coming into the weekend with a different approach and try to figure something out. In the heat races and the semi – the short races – even the beginning of the Main, I’m just riding so tight that it’s a struggle. I think it was lap 15 in the Main before I actually loosened up and was able to ride decent. I can’t be doing that. I need to come into Daytona next week and try something different.”

As a former rider in the Supercross premiere division, RCH co-owner Carey Hart knows all too well that sometimes you have to take the good with the bad but not let the bad become the definition.

”Ken rode strong all night and had a solid heat. We were hoping to keep that rolling in the Main (event) but it came down to the start and that’s what cost us. Jake had a tough night but he’ll bounce back. This is obviously a very competitive business so you have to be able to take the good with the bad and come out swinging next week.”

Monster Energy Supercross travels to the World Center of Racing this weekend for the Daytona Supercross.