Roczen 2 from 2 at Anaheim 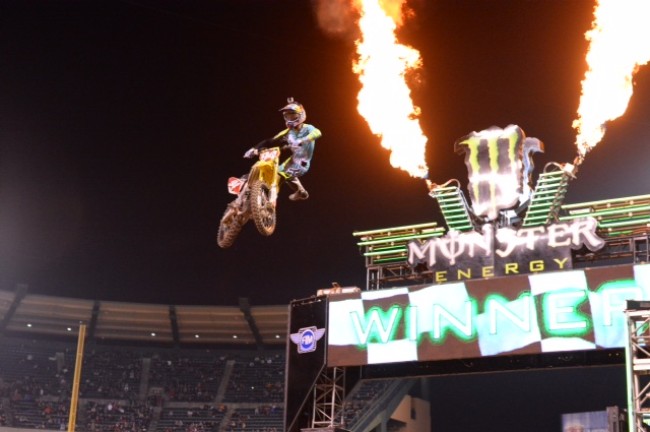 ANAHEIM, Calif. (January 17, 2015) -In front of 40,718 Southern California fans, Monster Energy AMA Supercross, an FIM World Championship, made its second of three visits to Angel Stadium on Saturday night on its path to determine #WhosNext. Following a strong start in the 450SX Class Main Event, RCH Soaring Eagle/Jimmy John’s Factory Suzuki’s Ken Roczen added to his points lead by racing to his second win of the season. In the Western Regional 250SX Class, Yamalube/Star Racing Yamaha’s Cooper Webb used a last-lap pass to make it back-to-back wins, taking control of the points lead by doing so.

Motosport.com/Arma Energy Yamaha’s Jimmy Alberston grabbed the SupercrossLive.com Holeshot Award, but was quickly overtaken by BTO Sports KTM’s Andrew Short, Monster Energy Kawasaki’s Davi Millsaps and Roczen. On a hectic opening lap where the entire field jockeyed for position, Roczen seized the opportunity to take the early lead and sprint away. Roczen first worked his way by Millsaps and then made the pass on Short on Lap 1. From there he opened a multiple-second advantage that would last the entirety of the 20-lap Main Event.

With Roczen out front, several riders put themselves in contention for a podium result. Short crashed out of second, which in turn collected Rockstar Energy Husqvarna Factory Racing’s Jason Anderson, which allowed Millsaps to assume second and Discount Tire Racing/TwoTwo Motorsports’ Chad Reed to take over third. Red Bull KTM’s Ryan Dungey, who was running fourth, then passed Reed for third on Lap 3 and proceeded to surpass Millsaps for second one lap later. That same lap Millsaps fell into the clutches of Reed, who then passed him for third. As these battles took place, GEICO Honda’s Eli Tomac, last week’s winner, was fighting his way forward from an eighth-place start. Tomac made quick work climbing his way into the top five and then made a pass on Reed for third on Lap 4.

Shortly thereafter, Team Honda’s Trey Canard and Reed came together while battling for fourth on Lap 7, when Canard misjudged Reed’s line and ran into the back of him. Both riders remounted quickly and Reed retaliated by pushing Canard off the track and forcing him to the ground. Reed was subsequently black flagged and disqualified from competition.

Once the field settled in, Roczen, Dungey and Tomac asserted themselves in top three and pulled away. Dungey slowly gained ground on Roczen and was consistently posting faster lap times, but once the leaders encountered lappers, it slowed Dungey’s progress and allowed Roczen to easily take the win and stay undefeated inside Angel Stadium this season.

“That was an awesome race. I fought hard the whole way,” said Roczen, who earned his fourth career victory. “It was a tricky tack but I was able to get a good start, get into the lead early and ride my own race. I’m so happy.”

“It was a good night and we gave a hard push,” said Dungey. “The first lap was chaos with everyone fighting for position, so Kenny [Roczen] got away a bit. I tried to close down the best I could, but lappers got in the way. The track was really difficult and you could only do so much. I’m excited and we’ll build from this.”

Roczen extended his advantage in the 450SX Class championship standings, and now sits 12 points ahead of Dungey in second. Anderson retained control of third, 21 points behind, with Tomac and Canard rounding out the top five.

While Nelson led comfortably, Red Bull KTM’s Justin Hill put himself into podium contention, followed by Monster Energy/Pro Circuit/Kawasaki’s Tyler Bowers, who started in fifth. As things took shape out front, Webb was on a charge through the field after starting 12th.

Nelson appeared to have control of the 15-lap Main Event, but he crashed out of the lead on Lap 6 and dropped to sixth. That allowed Bowers to assume the lead, just a short time after passing Hill for second. By this time Webb had fought his way into the top four and took over third on Lap 7. While Bowers pulled away, Hill and Webb engaged in an exciting battle for second, with Webb ultimately prevailing. Once in second Webb consistently chipped away at a four-plus second deficit to Bowers and put himself within striking distance on the final lap. As the two riders went to turn down the stadium’s first base line one final time and hit the home stretch, Webb cut inside Bowers, forcing contact that pushed Bowers off the track. Webb slipped by and took the win while Bowers recovered to finish second, his best finish of the season so far. Hill finished third.

“That was crazy. I got a bad start and had to come through the pack, so I was just trying to get into the top five,” said Webb, who raced to his first career win a week ago. “Then I got into second and realized I had a shot at the win. On the last lap I had to just put it in there, so I did and I was able to get by.”

“I got a decent start, but I rode better with people in front of me than out front by myself,” said Bowers, the reigning four-time AMSOIL Arenacross Champion. “I didn’t get tight or anything, I just made a lot of small mistakes. We’re looking good in the championship with a third, a fourth and now a second, so it’s hard to be angry with that. If we can get a couple wins we’ll really be in this [championship at the end].”

Webb passed Nelson for control of the Eastern Regional 250SX Class championship standings and now sits four points ahead. Bowers moved into a tie with Nelson for second.

Monster Energy Supercross continues next weekend with its fourth stop of the 17-race season from Oakland, California, signifying the first of two visits to the Bay Area in 2015. Live broadcast coverage on FOX Sports 1 begins at 7 p.m. PT/10 p.m. ET on Saturday, January 24.

Headlining the 2015 Monster Energy Supercross television package will be the first-ever live FOX network broadcast from MetLife Stadium in East Rutherford, N.J., on Saturday, April 25 at 3 p.m. EST. FOX Sports 1 will broadcast 12 races live and FOX Sports 2 will broadcast 3 races live. Each race will include a next-day re-air on FOX Sports 1. In addition, the authenticated FOX Sports Go app will live stream each race.

As a precursor to the live television, don’t forget to catch all of the pre-race coverage with Supercross Race Day Live, which will stream on SupercrossLive.com from 12:50 p.m.- 4:30 p.m. local race time each Saturday during the season. Practice, qualifying, behind the scenes features, and key rider interviews will all be highlighted on the Supercross Race Day Live webcast.