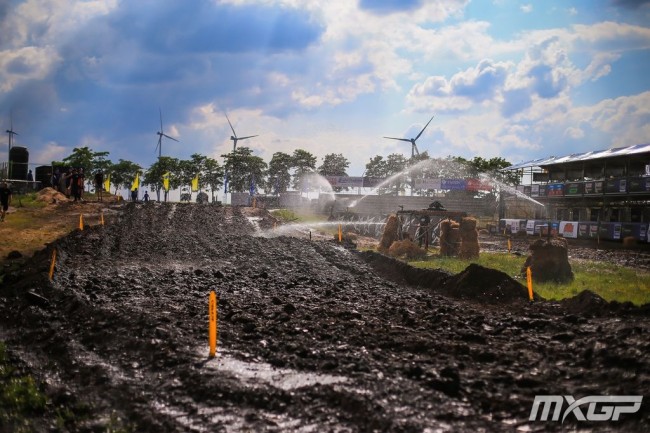 Highly respected journalist from On Track Off Road, Adam Wheeler had an interesting question for the riders at the press conference after qualifying in Teutschenthal.

There’s been a number of injuries in MXGP at the moment and Wheeler asked if the heavily watering to the tracks could be one of the reasons there’s been so many injuries lately.

Most of the riders agreed that they’d prefer water on the track than dust but Max Nagl interestingly think’s the 450cc four strokes are just too fast and that’s one of the reasons for the injuries.

Tim Gajser: I mean, now we are in the summer and the weather is really hot. It’s getting hotter and hotter every day. They need to water it, I think it’s better if there’s water on the track than it being dusty. The last couple of weeks the tracks have been sketchy but that’s just how it is.

Jorge Prado: It’s quite bad luck that at the last few GP’s there’s been quite a lot of injuries. Most of them are in the 450 class, probably because the speed is so high at the moment. For me, last weekend (In Latvia), the track was quite flat so I would say it was safe because it was flat. Like Tim said, we’re in the summer and it’s getting hot. The tracks are getting very hard so they need to water but maybe they should do it more during the day and not so much for us the MX2 guys.

Henry Jacobi: I would also say that water is better than dust. I think we can’t always find the perfect mix to find the best grip like at Matterley Basin or something. Water is needed and especially during the breaks but the sad thing is that MX2 is always after the breaks, especially the mid day break we have there’s a lot of water doing down.  I would say the worst they done was in Russia as they watered the take offs. Rui Goncalves, it’s his job and he should know that you don’t need to water the take off’s. Anything else, I can’t say so much because I prefer water than dust.

Max Nagl: I think, if you look there’s not so many injuries in MX2 happening. The most injuries are in the 450cc class, I think the tracks haven’t been changed that much the last few years but the bike development is unbelievable.  If you see the 450cc’s how fast they go, with the suspension you can go so fast through the bumps, the power is quite massive. I think somewhere there’s a limit on the body, everyone trains on a 100% level, there’s a limit there but not on the material side. The manufactures cannot change the bikes and make them slower but in my opinion that’s the problem. 450’s are just too fast these days to handle the speed on the rough tracks.