Richard Bird interview – back at the front! 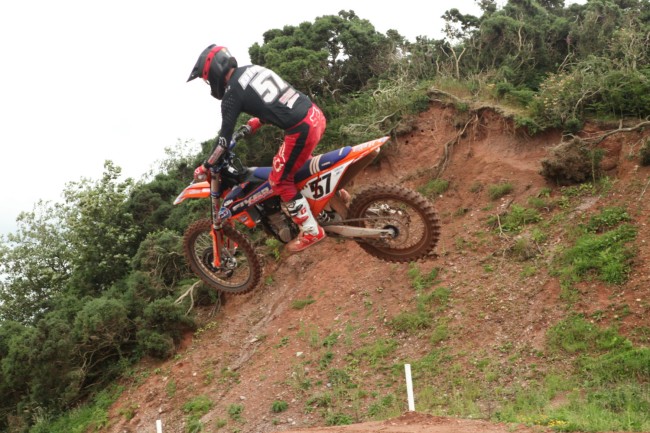 Defending Irish champion Richard Bird had been looking for a win all year and, just like buses, three came at once in a terrific display at Desertmartin for the penultimate round of the Irish championship.

It was perfect timing too, as Bird now has a six point lead over championship rival John Meara going into the final round of the championship.

We caught up with Bird to see what made the difference at Desertmartin.

You were on fire today, you caught John and put the pressure on, he made a couple of mistakes and you made it all look controlled and easy!

I wouldn’t say it was easy, now! I had to work for it, it was tough out there, there seemed to be a lot more sand put out on the track and stuff. It was so rough with just a short lap time. To get three wins, I haven’t had a win all year and then I get three in a day so it’s all good!

Has anything changed? It looks looks like you’ve upped your level or intensity since a few weeks ago?

All that has changed is that I went back to the stock suspension, I was struggling a wee bit with the cone valves just went back to basics and the bike feels great again. I feel like my normal self, I know it’s easy saying that because I had a good day, I had a good weekend last weekend and practicing during the week, I just feel more more myself.

The second moto you put a quick pass on John on the first lap, the second moto, I’m not sure if you came together or not on that final turn, was your plan to attack him quickly? You didn’t give him any time to settle in the opening laps.

There was a lot of roost out there and it although there was plenty of lines it was hard to pass because it was so quick. I was just trying to get going and get by him quick. That last race, we came into the last corner together, there were a couple of back-markers and I saw a gap up the inside, I thought he was going outside but he came to the inside and we sort of touched and he must have went down, because the next lap I seen there was a gap. It was solid day.

A couple of of times he cut the gap down a bit from 12 to nine or ten seconds, were you concerned with that or just happy enough as long as it didn’t get too close?

You don’t want it too get too close and have the pressure and maybe make mistakes trying to up your game again. I was able to see across the track where he was and just keep a gauge the whole race. I was able to to just control race sort of thing.

As far as the championships go are you hoping for more of the same from now on?

There’s only one round left and there is only a handful of points between us, so basically whoever wins the last round will win the championship, that’s the way it’s going to be. It’s just a pity the rest of the riders weren’t here, Jason has got this opportunity and taken it will both hands so fair play to him, he’s unreal at the moment, and there is a few injured but that’s the way the sport goes so it’s going to be me and John at the last round here.

And the British championship here at Desertmartin, you didn’t do it, but do you wish you had now with the pace you showed here today!?

Not really no, I have done it plenty of time and had a few wee niggly things leading up to it so just decided not to do and just watch it. I have done it for I can’t remember how many years, I don’t really regret not doing it, you know yourself, racing the British, it’s different to racing there today.