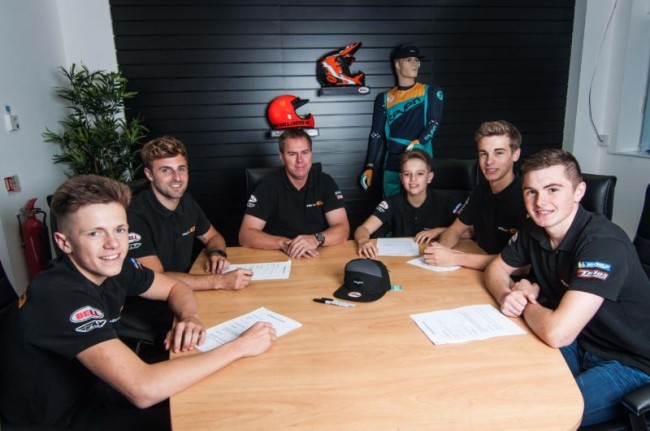 PR- RFX KTM have launched their five rider line up today ready for a full on assault of the British Championships and Michelin MX Nationals Championships in MX1, MX2, MXY2 and 125.

Ashley Wilde will lead from the front, he’ll be building on this year’s race win in the MX Nationals fastest 40 whilst recovering from injury and looking to beat his career best British Championship 3rd place finish. Also putting a year battling injury behind him Nathan Dixon is looking forward to taking on MX2 and showing that he can turn his obvious speed into race results.

The teams champions from this season Henry Williams and Joel Rizzi are both stepping up to new classes, Henry will be taking on the MX2’s and Joel at just 13 is moving up to the 125’s. Another up and coming rider Pat Gilligan and new member of the RMJ Pro Academy will join the team to take on MXY2. The team will also be traveling to selected GP’s with Ash in MX1, Nathan in MX2 and Joel in EMX125.

Ashley Wilde:
“I’m really happy to be joining the RFX KTM Team, The team works with some of the leading brands out there and I’m excited to be working with them. The team is like a family and I know all the team members and riders within the team really well. Hopefully we can all have a great year together and get the results we all want. I can’t wait to get started!!”


Paul Irwin:
“After such a successful year for our team RFX KTM winning 3 championship titles in our very first season we’re really excited to announce our rider line up for 2017. With the aim becoming one of the top British Championship teams we’ve signed Ashley Wilde to lead our campaign in MX1 supported by Nathan and Henry in MX2 and Pat and Joel taking on the youth classes in MXY2 and 125..”