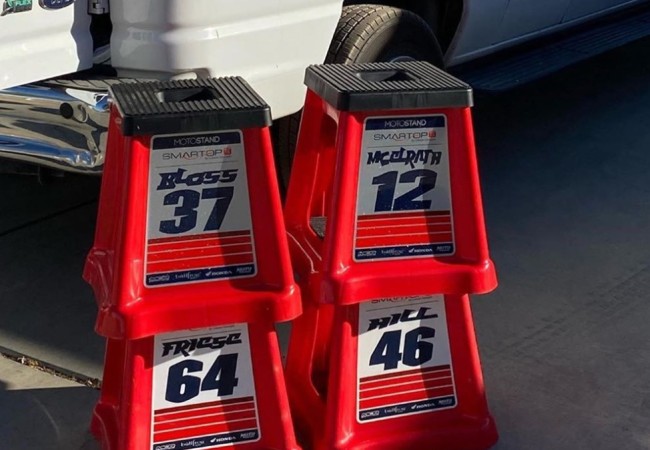 Smartop | Bullfrog Spas | MotoConcepts Racing (MCR) is pleased to announce its 2021 rider line-up as they welcome new and returning faces to the team.

MCR is excited to announce the addition of Shane McElrath to its 450 program. McElrath brings veteran experience and an impressive resume as he transitions from the 250 class to the 450 class for the 2021 season. The runner-up in the 2020 250SX West championship title and third place overall finisher in the 2020 Lucas Oil Pro Motocross series, McElrath is proven to be a consistent top-contender, capable of getting the job done. “I look forward to working with Shane as I think MCR’s top-level management and bike development team are going to allow him to succeed in what can often be a challenging period as a rider transitions from one class to another,” said MCR Team Owner, Mike Genova.

Also joining the team for the 2021 season is Missouri native and veteran 450 rider Benny Bloss. “Benny’s display of speed and whoop strength in the final rounds of the 2020 season allowed us to see the raw talent he possesses. We feel the MCR program will allow him improved starts, which will help put him up front, and the speed he possesses will keep him up front,” said Tony Alessi, MCR’s Team Manager.

Returning to the team following a top-ten overall finish in the 2020 Supercross season is Oregon native Justin Hill. The former 250 West Supercross Champion will return to the track aboard a 2020 CRF450R. “Justin displayed the commitment and hard work we expected to see last year, which showed in his speed, allowing him to secure eight top-ten finishes. We’re sure we’ll see an even higher-level from Justin in 2021,” said Genova.

Finishing out the 2021 rider line-up is returning MCR rider, Vince Friese. Because of Vince’s experience and knowledge, he will be an integral part of developing the 2021 Honda CRF450R to the level of MCR’s 2020 Honda CRF450R bikes.

In addition to the Monster Energy Supercross Series, MCR is committed to participating in some or all of the 2021 AMA Lucas Oil Pro Motocross series should rider health and world conditions allow. “ Our mission in 2021 is to utilize the testing and development abilities of Vince Friese to turn the new model CRF 450 into a race-winning package for future seasons,” said Alessi.

The 2020 Monster Energy Supercross Series begins at NRG Stadium in Houston, Texas on January 16th and travels the country concluding at Rice-Eccles Stadium in Utah at a date yet to be announced.