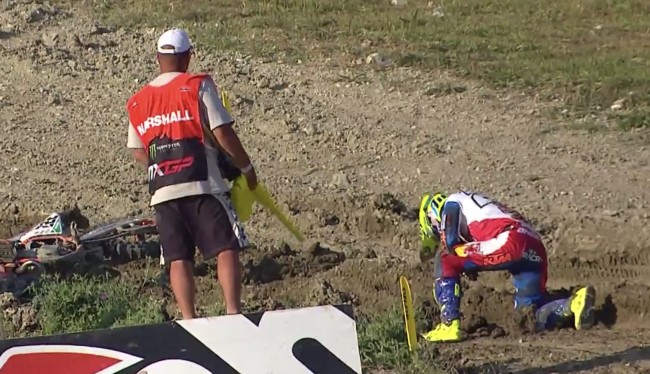 Romain Febvre controlled the qualifying race from turn one to take the win on a very slick old-school track in Russia as the drama unfolded behind the Frenchman who says he has been battling illness all week.

Jeffrey Herlings qualified 16th but got a top five start then washed out the front wheel on the brakes down a hill on lap one forcing the Dutchman to come from dead last back to 16th.

Gajser and Cairoli battled through after average starts but it was Gajser who passed the Italian with Cairoli then sticking to Gajser like glue as they caught third placed Paulin and second placed Desalle.

Desalle dropped from second to fifth in just one lap with Paulin, Gajser and Cairoli running nose to tail – but then Cairoli went down hard, getting cross-rutted on a downhill and landing hard on his back. Cairoli got up but rode straight to the pits and didn’t finish the race.

Paulin then tipped over to give Gajser second but the Slovenian ran out of time time catch Febvre as the hard pack men ruled on day one in Russia.

In MX2 Jorge Prado astonishingly didn’t holeshot gating fourth with teammate Vialle out front from Sanayei and Geerts. But then Vialle got hung up in some ruts and new race leader Sanayei tipped over leaving Geerts in front and Prado second.

The Spaniard passed Geerts and gradually pulled away as Olsen got into second but couldn’t do anything about the championship leader, with Prado calmly showing his class yet again. Ben Watson had a huge crash over the finish jump that means he will start in 25th tomorrow.