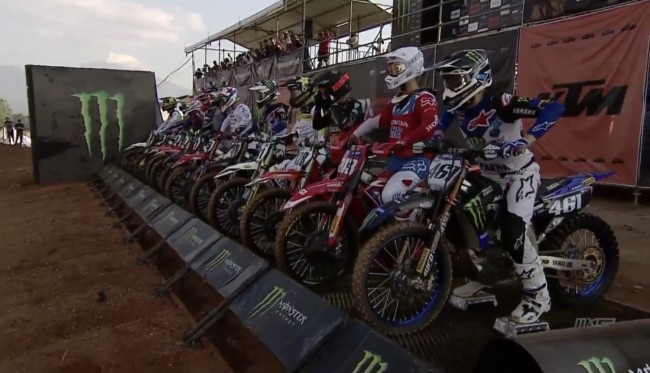 Glenn Coldenhoff led the majority of the qualifying race in MXGP on a tricky but spectacular Semarang circuit until, with three laps to go, the Dutchman made a mistake in a rut and allowed Romain Febvre by who had been really putting the pressure on for the previous few laps.

That one mistake was enough to give Febvre the win with Coldenhoff unable to retaliate giving Febvre another race victory, albeit a qualifier, hot on the heels of his second moto win last time out.

Tim Gajser took third but a slight mistake while second and in the battle for the lead, lighting up the back wheel in a right hand turn, gave Febvre second and as the front two began to pull away, Gajser didn’t go with them and eventually settled for third.

Jorge Prado took the win in MX2 in Semarang but criticised the track preparation that saw a lot of water out down on a slick track in certain areas. Geerts and Vialle chased Prado home as the three teenagers set the pace again in MX2.