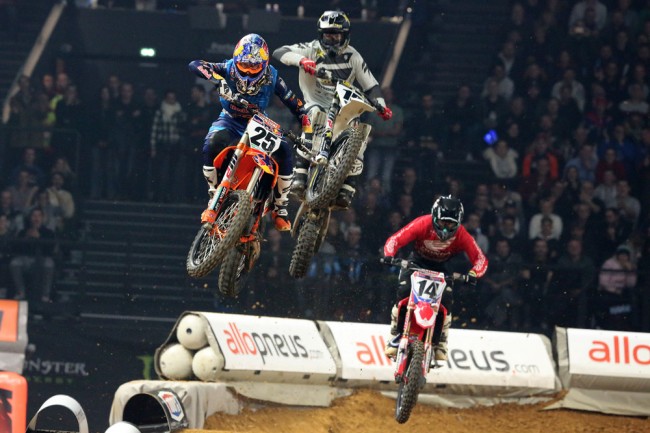 Night two of the Paris supercross at the brand new U-Arena began when Marvin Musquin edged the superpole from a very fast Dean Wilson and Cole Seely – and it provided a sign of things to come with close racing all night.

Musquin took the holeshot in the first sprint moto but ran off track just as he was pulling away and let Osborne, Wilson and Seely close in. However Musquin re-grouped and put in the fastest lap to pull away again from Osborne. Wilson just about held off Seely for third.

In race two Seely caught and passed race leader Musquin and pulled away to a dominating win! The Honda rider looked superb and blitzed the whoops to pass the Frenchman and said: “Marvin is hauling ass and I just had to find my lines and choose them wisely and charge forward. It was tough to catch him and tough to pass.”

Musquin looked a bit rattled and frustrated after the pass and that let Dean Wilson sneak up and put the pressure on the French favourite but Wilson was unable to find a way by. Zach Osborne recovered from a bad start and passed the flying Cedric Soubeyras with just two corners to go for fourth.

After early pressure from Cole Seely, Marvin Musquin found his rhythm and pulled away to win by eight seconds in a superb display of technical riding to be crowned the supercross king of Paris!

Musquin heel-clicked his way over the line in celebration of a brilliant weekend back home in Paris and reiterated his role as a major title contender for the 2018 supercross title.

Cole Seely got the start and really poured on the intensity in the first five minutes but once Musquin stepped up the pace Seely had no answer and will know where he stands with a few weeks left until Anaheim to find that extra pace. But Seely was impressive in Paris.

Dean Wilson was a lonely third with Osborne coming from a bad start and Jeremy Martin, coming back from a wrist injury sustained during Saturday qualifying, fought hard for fifth tonight just passing Cedric Soubeyras with a couple of laps to go.

It was a great first event in the U-Arena in Paris and it has to now be considered as the permanent home for the recently re-located Paris Bercy event – and maybe even a World supercross round eventually!

Tyler Bowers took the Sunday win in SX2 on the Bud Kawasaki after running down race leader Thomas Do. Yannis Irsuti came from a bad start back to third place after a lap of block passing on the penultimate lap with GP rider Iker Larranaga seeing the Frenchman come out on top. Larranaga still impressed with fourth against the French and Americans supercross specialists.