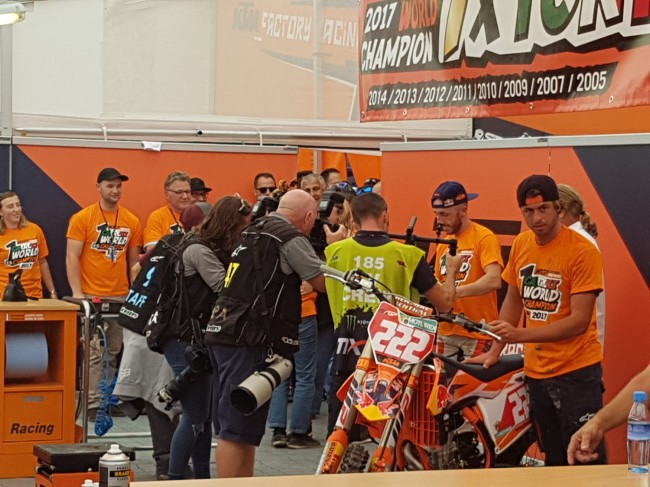 Cairoli took the holeshot but was chased down and passed by Herlings. However Cairoli wasn’t giving up and stalked the Dutchman and very nearly made the pass in the last couple of laps! As he crossd the line on Herligs’ back wheel Cairoli threw his bike to the ground to celevrate an historic NINTH world title!

The king of MXGP beat all the yougnsters and even 450 US champ Eli Tomac to confirm that in 2017 Tony Cairoli is once again the best rider in the world:

There were big crashes by Clement Desalle, Tim Gajser and Jeremy Van Horebeek who all DNF’d the moto.

Nagl pulled the holeshot with the factory Yamahas just behind. Herlings and Cairoli where about the top 10 off the start but it was the #84 who marched through the field the quickest. After 10 minutes Herlings was in the lead with Cairoli in 5th. The freshly crowned champion was trying to push to get to 2nd but wasn’t as effective as Herlings, this would come back to bit TC as he ran out of tear off’s behind Nagl. A crash at the end of the race dropped him back to 6th. That fall also meant he gifted Max Anstie the finally podium spot who along with Febvre was putting on a ride at the end of the moto. Herlings dominated with a big lead to once again go 1-1 and secured 2nd in the championship.

There was a big crash in the second turn off the start which included Searle, Bobryshev and Coldenhoff, the latters bike flying off the track over a barrier, across the grass only for another barrier stop the #259 hitting the crowd! Coldenhoff and Bobryshev were able to finish the race but Tommy Searle didn’t continue due to a knock on his ankle. It isn’t expected to keep him from racing next weekend of the Motocross of Nations.