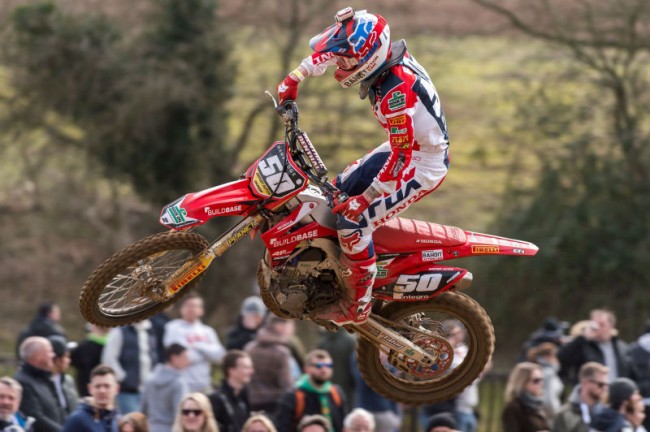 Bryan Mackenzie held off holeshot man Adam Sterry to take an impressive win, his first since 2014, while Martin Barr effectively took the championship lead by a point after coming from eighth to pass championship leader Clarke for third. Clarke took fourth as pole-sitter Mel Pocock passed Liam Knight for fifth with two laps to go despite a crash in turn one.

Shaun Simpson took the early lead from Whatley, Irwin, Searle and Nicholls. Irwin went down and dropped to sixth as Searle and Nicholls then moved by Whatley. Irwin charging after his crash, did likewise a few laps later and passed his teammate to go fourth. Searle tried to close a 5/6 gap down to Simpson but Simpson was in control. Searle then got passed by Nicholls and dropped to third, the Revo Hitachi Husqvarna man getting stronger each weekend. But Searle, who had a smoking machine, fought back and passed Nicholls back on the last lap and Nicholls collided with a backmarker!

Mel Pocock took the holeshot from Martin Barr, with championship rival Clarke way back in 13th on lap one. Barr made the move on Pocock on lap 4 to take the lead but Pocock was keeping Barr honest at the front until he went down and got stuck under the bike, letting Sterry up into second but 14 seconds behind Barr. Pocock finally got up back in 13th position but the chance of a win had gone. James Dunn, after no points in race one, pulled out of this moto to score no points on the weekend. The joint red plate holder losing a lot of points in his title challenge.

Barr took the win by 20 seconds from Adam Sterry to take the overall win and the red plate. Steven Clarke took third on the last lap doing a great job of damage limitation in the championship, which is now Barr v Clarke as they head to Barr’s home race at Desertmartin.

Simpson took the holeshot from Nicholls and Irwin with Searle in fourth. Searle squeezed by Irwin on lap six and proceeded to charge after Nicholls as Simpson edged clear with a three second lead. Searle then worked his way by a stubborn Nicholls with three laps to go but Simpson was in control out front and took his second win of the day. Simpson now leads the championship by ten points over Searle.