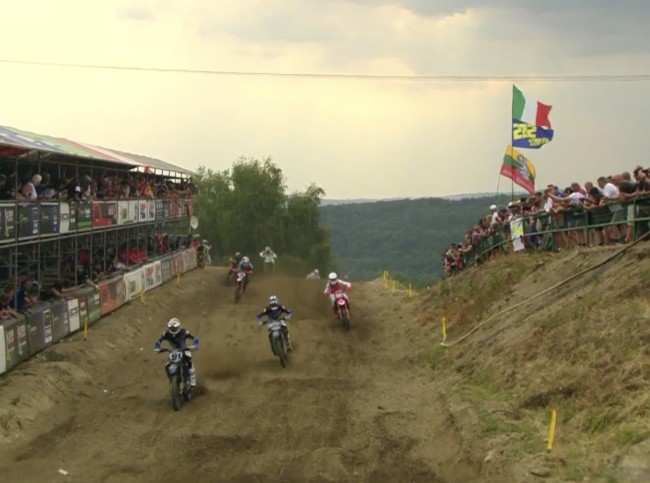 With traction at a premium and ruts at a minimum, there was some great racing during the qualifying races at Loket for round 13 of the world championship in the Czech Republic.

Jeremy Seewer led early in MXGP but Romain Febvre passed Gajser then eventually got his teammate, after putting on some serious pressure, to take a very impressive race win, with Frenchman using his hard pack skills to find grip on the slippery surface.

Gajser tipped over while third chasing the Yamahas but slipped off, however would still work his way back into third, passing Arnaud Tonus.

Coldenhoff had been running inside the top five but a pass by Arnaud Tonus left him off the track and then Searle and Paulin found their way by in the closing laps.

For Searle it was one of his best rides of the season. Finally getting a good start, he got into the pace of the leaders and held Paulin off for sixth in his first Grand Prix as a factory Kawasaki rider and also posted the second fastest lap of the race to show he still has the speed to run at the sharp end in the right surroundings.

Jorge Prado worked his way by Henri Jacobi and Darian Sanayei to take the lead and clear off at Loket but the battled raged throughout the top ten. Vialle followed Prado through the Kawasaki duo to take second,while Jacobi just held off a charging Calvin Vlaanderen, who had worked through the top ten to take third.

Dylan Walsh rode great for fifth with Sterry a strong sixth with Thomas Kjer Olsen coming from a first turn pile-up, that also claimed Jags Geerts, to take seventh. Mitchell Harrison came from 14th to ninth to show he is adapting well to the unique circuit.